Will Ferrell is at again. Once more we have him playing a buffoon character toppled from the heights of fame and power. It’s his bread and butter and he’ll continue to push this shit out until it becomes unpopular. As a matter of fact, just last year Ferrell squeezed out “Talladega Nights: The Ballad of Ricky Bobby” into our collective crapper. Can Blades of Glory, a movie nearly the same in every way, manage to strike it rich in a similar fashion? Yes . . . and no.

The yes — whereas “Talladega Nights: The Ballad of Ricky Bobby” mostly focused on Will’s comedy prowess as a solo artist, Blades of Glory relies more on his interaction with co-star Jon Heder. That’s because 80% of the movie has them paired together. Why? Because, this film pokes fun at the heart of figure skating — male skaters are faggots. Ferrell plays Chazz Michael Michaels, a brash, cocky womanizing figure skater who pairs with his hated rival, the artsy, feminine skater Jimmy MacElroy (Heder). Together they break into the doubles skating competition in an effort to win themselves the coveted gold medals that have eluded them (they lost the ones they won in individual competition 3 years prior).

And as anticipated, Ferrell’s portrayal of Chazz fires on all cylinders. That’s because his most successful outings all have him typecast in the same manner (see “Wedding Crashers” and “Anchorman: The Legend of Ron Burgundy”). Ferrell, is outrageous and over-the-top in his delivery and actions. The homophobic looks he gives when training for the doubles competition alone make the movie worth seeing. What is unexpected however, is the great performance by Heder. I thought he would get swallowed up by the screen mugging of Ferrell. This doesn’t happen much and even more impressive is there are a great many times when Heder actually outshines the outrageousness of Ferrell. He’s come a long way from his breakout role in “Napoleon Dynamite.”

The no and my biggest gripe of the movie is it’s basically the same as all the other Will Ferrell comedies that came before it. That doesn’t mean it’s not funny (after all, this point is also a ‘yes’), it’s more akin to a fart joke — you’ll still laugh at it — but after a while you just don’t laugh as hard. Watching ridiculously dumb people act and react to ridiculously dumb situations will probably always be funny but I suspect the frequency of belly pain laughter diminishes with each incarnation (someone get a federal grant and do a study on this please). That’s basically what happens with Blades of Glory. While there are indeed some laugh out loud moments (the first time they skate together), overall the movie feels forced. And everyone knows you can’t force comedy. It’s either there or it isn’t. Another disappointment is the frugal use of Jenna Fischer from “The Office.” She is an attractive girl and definitely an up-and-comer. It would have been nice to see her take on something a bit meatier than simply having her tit fondled by Ferrell.

All in all, you’re going to get what you pay for. For those who are fans of Will Ferrell, you won’t be let down. He can carry a movie like few others can. For the rest of the movie going public, it’s a toss up. Heads; rent one of the better Ferrell comedies from NetFlix (or Blockbuster for you ancients) or Tails; see Blades of Glory, laugh a few time and then wish Will Ferrell would find a new type of character to apply his talents to. Either way the coin lands you’ll watch a grown man get paid handsomely to act like a twit. 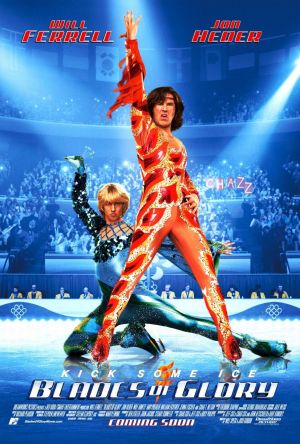