Chris Rock — just what the doctor ordered. Great crossover appeal (I’m a white guy and he doesn’t appear threatening) and funny as fuck. This guy has to be one of the funniest guys in America and he seemly vanished into thin air. Until now that is. In his second directing gig, he drops I Think I Love My Wife, a movie that showcases what we, poor misunderstood married men, go through each and every time we see a another woman go by. And Lord knows, we’ve needed our tale to be told!

The story of I Think I Love My Wife is simple: Richard (Chris Rock), a middle-aged married man is thoroughly bored with his marriage of seven years to Brenda (Gina Torres). He’s resigned himself to eating chicken every night and not having a lick of sex anymore. That is until Nikki (Kerry Washington) pops back into his life. The attention of an extremely hot woman gets Richard’s blood flowing again and he ultimately has to make the decision each of us have to make at some point during our married lives; family or fun? And for the next 90 minutes, we watch Richard struggle with his “dilemma.”

There are a few films that you know are going to be funny after seeing the opening scene. One was in “The 40 Year Old Virgin” (Steve Carell trying to piss with a hard-on) and another undoubtedly here is when Richard exclaims, “I’m bored out of my fucking mind” as he talks about his doldrums marriage. The stage is immediately set for some funny shit, as there can’t a better vehicle to make fun of than a guy starved for sex and his love or lust thought processes. I believe it can be truthfully said that any movie that showcases the will of the dick versus the will of the mind has got to be good.

So what works? Chris Rock has put together a great comedic performance. While most people think of his roles as foul-mouthed, ghetto trash, I tend to think he has the unobtrusive, non-threatening, almost white black character down to a science. In his role as Richard Cooper, the lone black investment banker at Pupkin & Langford, he proves he’s got just the right amount of white in him. Another big, big plus is Kerry Washington as the temptress. She is one helluva fine specimen and having her parade around in her bra and panties is a beautiful sight to see. All I can say is, if given the chance, I would have given in to temptation and tried my damnedest to impregnate her. She is that fine. And finally, Steve Buscemi as George, Richard’s irreverent co-worker. Once again Buscemi takes a bit part and makes the screen time he shares with others his own (see any one of the Adam Sandler movies he’s been in).

The bad isn’t necessarily a problem for me. It’s vulgarity. Potty humor at it’s worst (or finest, depending on how you view it). I’ve always been a fan of it and I suspect I always will (those that read my reviews know I tend to use it for my own emphasis). 90% of the time, the more vulgar and infantile the humor, the more I like it. As expected, nearly every other word in I Think I Love My Wife is an expletive. And of course the entire movie is constructed on the idea of having sex with every woman the eye can see other than your wife. It’s definitely not a movie to watch with your priest or your mother.

The verdict for I Think I Love My Wife is an easy one to cast. See it. Laugh your ass off. Married men will especially love the humor. Single men will gain an understanding at how tough it is to be a married man — it takes a great deal of perseverance. On the other end of the spectrum, married women will certainly love the insight into their husbands psyche and will love the final outcome of the movie more. Single women will realize just how easy it is to manipulate a man in shackles. As if they needed movie to spell that out for them . . . 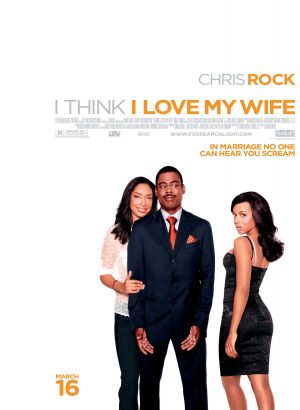