Time for a kick-ass action movie — the first of 2007. This time around we’ve got Jason Bourne, going after some bad-ass government officials who have wronged him . . . oops, I’m sorry I’ve got the movie confused. I’m supposed to be reviewing Shooter and I’ve started to review “The Bourne Identity!” I’ve got to stop drinking. Or do I?

After all, Shooter is a damn close match to the Bourne series. While I don’t want to point out all the similarities, I’ll just highlight a few glaring ones:

As you can see, the general idea between these movies is awfully close. The problem is Shooter isn’t nearly as good as the movie it copies so faithfully. While both movies require some level of belief suspension, I found myself really questioning the movie’s credibility. Little things like:

Setting aside the questionable story line of Shooter, there are still a few pluses working for it. One positive is the casting of Mark Wahlberg as Bob Lee Swagger. This character needed to be quiet, reserved, cocky and tougher than nails. This is without a doubt the perfect character attributes for Wahlberg to perform. Many of his best performances have some combination of those traits (see “The Departed” and “Four Brothers“). Positive two — Shooter delivers on the core principles of an action movie. There is no shortage of guns and shooting. It has plenty of fights and explosions. It has a beautiful girl (Kate Mara) in the supporting role (who unfortunately doesn’t bare anything).

Ultimately, I felt more time was needed to make Shooter a more polished product. There were just too many leaps of faith necessary for me to fully endorse this film. However, I am confident this movie will do just fine as a stop gap measure for adrenaline junkies who can’t wait until August for “The Bourne Ultimatum.” 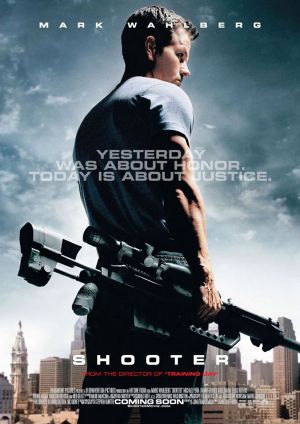