This can’t be good, can it? Sandra Bullock is back in a movie that requires her to do something other than look pretty. Why, oh why does Hollywood make movies like this? Surely, they know that Mrs. Jesse James, isn’t a bankable commodity anymore. This is a woman who starred in “The Lake House” last year. But then again, me being the bleeding heart that I am, I suppose everyone deserves multiple chances to get it right again (she got it right in “Miss Congeniality” and “Crash.” Unfortunately, Premonition was a terrible stage to try and get back on track with.

Let’s try and figure this mess together — from the beginning. We have Linda (Sandra Bullock) who wakes up one day in some sort of parallel universe in which she is informed her husband, Jim (Julian McMahon), has been killed in a car crash. Next day, she wakes up as if nothing has happened; hubby is happily chowing down on some grub and the kids have no recollection of the fact the day prior (or so we thought) their mommy told them their daddy was dead. Fast forward a few days, and she is now transported to the funeral and making a scene because she swears that everything is an elaborate hoax or mistake. It isn’t, so for whatever inexplicable reason her mother and best friend have her committed to an asylum. Next day, she trying to piece things together from her future excursions — ah fuck it, you get the idea. We’re all over the place and I’m just too damn tired to try and put Humpty Dumpty back together again.

What you can plainly see, is Premonition literally makes no sense (or maybe it does in some convoluted sense). And that’s not just because the movie skips forwards and backwards and diagonally on occasion, it’s because there is absolutely no character development or explanation of any of the goings-ons. Why the fuck should I care about Linda or for her miserable existence? I guess the writers of the movie didn’t think to ask that question because there is certainly no evidence they even tried to give her, or anyone in the movie, a personality. Everyone is bland and unexciting. How about an explanation of her new found powers? What are they and why did they hit her like a ton of bricks one fine day? The writers at least asked themselves the question, after the fact, because the scene where she goes to her priest for answers look like it was thrown in for a quick resolution. Nonsense. Oh yeah, I won’t even mention the inconsistencies that abound.

But all is not lost. Sandra Bullock actually does a good job trying to pull this Value-Jet crash from the Everglades. Not only does she continue to withstand the test of time (that means she is still a pleasant sight for sore eyes) but she rides on an emotional roller coaster like a seasoned pro. Her character is distraught, angry, upset, confused — the whole gamut of emotions are portrayed in a convincing manner. Well done, Sandra.

So as my final trick, let me look into the future . . . I see it clearly . . . my premonition for Premonition is it’s not going to win any awards or break the $50,000,000 mark in state-side viewings (which is what I guess it cost to make). I also see myself hooking up with hot blonde in the very near future. I’m confident at least one of my prophecies will come true. 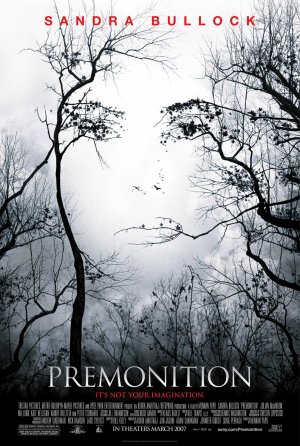