Has it really been 14 years since the freaky, full-sized, mutant turtles graced us with the presence on the silver screen? Yeppers, the last time I saw them it was in “Teenage Mutant Ninja Turtles III” (I’m not counting television cartoons or straight-to-DVD titles). I’m obviously out of the loop since a great deal of many things have changed. Not necessarily for the better either — our teenage mutant ninja turtle friends have fallen a long way from the insanely, original black and white independent comic books I grew up with. And even though Eastman and Laird, the original creators, are still writing the stories, there isn’t much to like anymore. Maybe they should think about retiring on the millions they’ve already amassed.

TMNT starts in the year 2007 and we find the shelled quartet disbanded. Leonardo (voiced by James Arnold Taylor) is spending his days in the South American jungle searching for his inner leader. Donatello (Mitchell Whitfield) has relegated himself to doing IT phone support — who said all those lucrative jobs are in India? Michelangelo (Mikey Kelley) has lowered himself to dressing as a clown named Cowabunga Carl and getting the snot beat out of him by sugar-fueled children. Raphael (Nolan North) continues his renegade ways and fights crime as a solo artist named Nightwatcher. But lucky for the earth, they manage to get themselves back together and with the aid of old favorites Casey Jones (Chris Evans) and April O’Neil (Sarah Michelle Gellar) they manage to fight off the latest terror. That terror comes in the form of four stone, immortal warriors who threaten New York City by trying to release countless monsters from another dimension into our own.

It’s clear the writer and director (Kevin Munroe pulling double duty) isn’t pushing for an Academy Award, Golden Globe or other cheesy award. It’s all about the benjamins, here. The plot and action is the same as every other movie of this type: Predictable. But there are two aspects of this movie that really bum me out. First and most importantly, the whole premise feels tired. The typical banter between brothers isn’t as snappy or fresh as I remember it. The dialogue isn’t as funny as usual either and in a great many scenes almost seems like it is forced. Very little in the way of ingenuity is done — you’d think that after all these years there would be a mountain of material available. Secondly, with all the advances in computer-generated imagery (CGI) I expected a knockout presentation. After all, TMNT is created entirely on the computer. Yet, aside from the fight scene between Rafael and Leonardo in the rain, I wasn’t impressed with the graphics. It did appear the animators tried to create a realistic backdrop (but where are all the cars in NYC?), yet the human characters are over-sized and too cartoonish (obviously copying “The Incredibles”).

All said, TMNT is going to do what is was meant to do — make a pile of money. Little charm is left from the glory days, yet parents will undoubtedly give in to their children and take them to see it; repeatedly (try parenting instead). What I fear most though, is the merchandising machine that will soon blanket the world. Back in the day, you couldn’t escape a turtle on the television or radio. The wave is coming again, ride it or get swept under. Cowabunga, dudes! 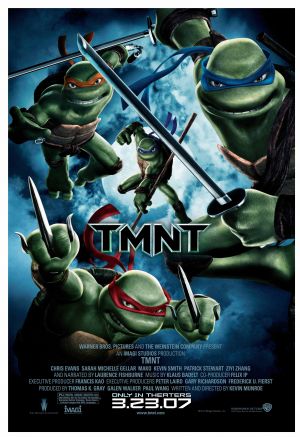