Kill or be Killed (originally “Red on Yella, Kill a Fella”) is the kind of movie you want to root for: A genre bending romp across West Texas that has everything from spaghetti/western tropes like combination brothel-saloons, flasks of whiskey passed around fires, and shootouts everywhere from chain gangs to churchyards, to horror related elements like murder for sport, creepy families, and bizarre rituals and prayers.

On the surface, “Kill or be Killed” follows Claude “Sweet Tooth” Barbee (co-writer and director Justin Meeks, “Butcher Boys”) and his gang of outlaws as they attempt to retrieve the spoils of a bungled train robbery, which one of them had “squirreled away” before becoming incarcerated for six months. The movie starts with a rescue sequence and ends with a twist. Between the two are a lot of money, a lot of bullets, and a lot of bodies, but unfortunately not much else.

That being said, the score by John Constant is absolutely wonderful, and sets the tone for the film as much as if not more than its beautiful, sweeping establishment shots. Some of the acting is great as well; in particular, aforementioned anti-hero Sweet Tooth, comic relief jailbird “Slap” Jack Davis (Paul McCarthy-Boyington, “The Human Race”), and rescued ventriloquist/salesman Willie Carson (Bridger Zadina, “Sins of Our Youth”) really carry the film.

Unfortunately, this is about where I run out of good things to say. Very early on, Kill or be Killed starts to become confusing. Shortly after that, it stops even being fun. It’s one thing to have a movie about antiheroes, to follow unlikely and lawless protagonists as they act out their crazy and charming schemes. It’s another thing entirely to watch sex crimes, convoluted religious imagery, and utterly nonsensical violence, growing less and less logical by the second, unfold for one hundred and four minutes on screen. When everyone is greedy, no one is fleshed out, and the stakes are never made clear, it’s difficult to find anything to care about enough to invest any amount of energy into what is going on.

In short, this movie does not know what it is. Its creators do not either; on the DVD commentary, Justin Meeks and his co-writer and director Duane Graves repeatedly assert their ignorance in regards to their own characters backstories, motivations, and goals. There are ways to blend genres together in novel and compelling combinations, and there are ways to throw a bunch of different plot elements at the wall and hope that some of them stick. It is abundantly clear that Kill or be Killed is an example of the latter.

While all in all an interesting watch for viewers just looking for something exciting and different, Kill or be Killed says nothing, explains nothing, and is about . . . essentially nothing. Its beautiful landscape, inclusion of well known character actors like Michael Berryman and Pepe Serna, and nearly perfect score (despite strange sound effects that jaggedly disrupt the mood) end up not enough to save it from its aimless writing, confusing crimes, and insistence on image over explanation. As the sheriff says to the remaining members of the gang toward the end of the the movie, it’s time to face the music boys. Following this film is ultimately far more trouble than it’s worth. 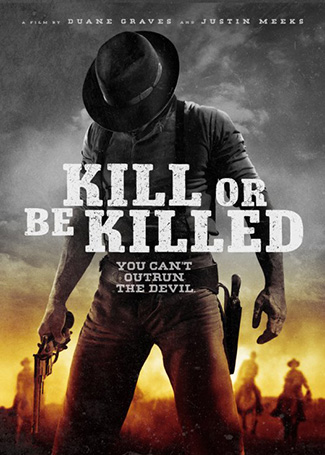