Generally, part of the charm of international cinema is that it’s specifically and obviously not Hollywood cinema. So when something like the Norwegian disaster drama The Wave tries so desperately and artlessly to ape similarly themed Hollywood blockbusters, there’s a sense of overwhelmingly suffocating futility that plagues the project. Of course, if The Wave actually ends up a good and thrilling riff on the sort of big-budget destruction that Irwin Allen most famously popularized and Roland Emmerich later redefined, then there’s likely little reason to complain overall, but this is tripe even by Emmerich’s loopy standards.

Opening with a history lesson about a small Norwegian town that was wiped out by a tsunami more than a century ago, director Roar Uthaug makes quickly clear that Norway is geologically evil. Or something like that. Landslides in the fjords seem an inevitability instead of a possibility and so we enter the story with a heavy sense of foreboding and foreshadowing.

Kristian (Kristoffer Joner, “The Revenant”) is a geologist prepping to leave his job and move his family out of the little village, Geiranger, they currently call home. Kristian’s family is cut from the same cloth as any cliche-ridden Hollywood dreck, so in addition to his headstrong wife Idun (Ane Dahl Torp, “Pioneer”), he has an innocent young daughter and an angst-ridden adolescent son. Conflict is brewing the moment we see the family unit together and this light drama dominates the early portion of the movie.

Eventually, though, the plot picks up steam and, naturally, the mountain overlooking the community, Åkneset, gives the family an epic send-off. A large chunk of rock breaks off and smashes into the fjord, causing a towering tsunami to threaten the village citizens. As the titular wave approaches, Uthaug stages the action bluntly enough to be relatively entertaining. Kristian knows that everyone must get to higher ground, so there’s a race up the village’s main road to reach a specific altitude.

It’s a fine sequence when factoring in the intentional unoriginality and the digital effects work marks the movie’s best and most impressive attempt to replicate Hollywood quality. But even that feels generous to write. It’s all pretty silly and most of the performances are quite poor, a detriment which is felt more plainly with the lack of star charisma that usually powers Hollywood’s disaster epics.

Once the tsunami has done its damage, The Wave focuses on reuniting the split-up family, allowing Kristian to become something of an unlikely action hero. It makes sense that there needs to be more to the plot than the tsunami just rushing by and this particular aftermath conflict is pretty standard for disaster pics, but that’s where the problem lies. Uthaug doesn’t give the imagery or situations any semblance of personality, so once again, we’re left with a cheap Hollywood ripoff.

Scenes inside a flooding hotel are reminiscent of “The Poseidon Adventure,” but only in a way that further highlights how Uthaug’s efforts have amounted to nothing more than lamely microwaved Hollywood cheese. Treacle flows almost as furiously as the wave itself and there are even some baffling decisions made around a couple of good samaritans who probably should have been left on the cutting room floor.

If that sense of critical generosity seeps back in at any point, it’s to praise the production design in the tsunami aftermath, with sets showing a lot of nasty destruction in what is a much smaller space than the full cities Hollywood regularly destroys. Viewers can tip their hats to the actors for doing their own stunts, too, which is impressive and kind of the complete opposite of how Hollywood usually does things.

But really, none of this makes The Wave remotely good or even vaguely recommendable. The family drama is Uthaug’s focus and the family drama stinks. The level of spectacle is ambitious for a production like this, but hardly commendable as a whole. Still, Uthaug probably accomplished exactly what he set out to do: Make a homegrown blockbuster for all the Norwegian moviegoers who want to see something other than Los Angeles or New York get the brunt of Mother Nature’s wrath for once.

In that sense, mission accomplished. But that’s a low bar to clear in many ways, at least creatively speaking. Uthaug’s insistence that his movie be so mechanically mapped on the Hollywood template leaves no room for originality. If The Wave managed to squeeze in some commentary on American blockbusters or offer something of its own spin on the formula, then perhaps there’d be some worth here. That’s just not what The Wave is. This is a generic imitation all the way. Hollywood might find it flattering, but even splashy popcorn pics can benefit from a discernible identity. We certainly don’t need more Hollywood than what Hollywood is already providing us, though it appears Uthaug would disagree. 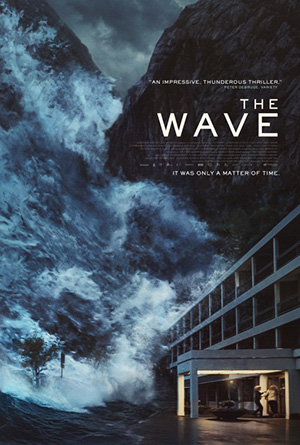