As a kid, watching “Tom and Jerry” was must-see TV. Observing that poor blue cat getting outsmarted by a tiny brown mouse (episode after episode after episode) never — incredibly — got old. I always knew Jerry was going to get the last laugh, no matter how close Tom got to beating him. Cat and mouse storylines can provide a thrilling engine for making remarkable entertainment. Whether you’re viewing a cartoon or a live-action tale, it’s good drama when it’s done right.

Mojave is the brand new film from Academy Award winning writer-director William Monahan (winner for “The Departed,” also responsible for “Edge of Darkness” and “The Gambler”). The film attempts to see itself as a classical thriller between two foes, which on the surface, sounds highly intriguing. Unfortunately, what unfolds before our eyes brings us a different result. It is an unexpectedness that usually, by definition, brings a satisfying dimension to a tale. But with this narrative, the unexpected notion that it delivers is apathy.

For a story with action genre elements, Mojave gets off to a sluggish start. Garrett Hedlund (“Pan”) coldly plays Thomas, a young man who leaves his upscale home and unexcitingly travels to a desert (which the movie is named after). The film has a brief spark of life once we’re introduced to Jack, adequately played by Oscar Isaac (“Star Wars: The Force Awakens”). Watching Jack sputter off Shakespeare and biblical stories with a leery nature is meant to help establish him as a formidable rival to Thomas. And yes, Jack is by far the most engaging character in the entire narrative. However, Isaac, unluckily, is unable to escape a dullish sensibility that also plagues Hedund’s character. This is incredibility problematic since it is Thomas’ viewpoint for how we see the story unravel.

As for the supporting characters, a much needed boost of scene-stealing energy never fully arrives. With such proven actors and appealing presences like Walton Goggins (“The Hateful Eight”) and Mark Wahlberg (“Ted 2”), it’s disappointing how underwhelming they are. It doesn’t help that their roles are more so cameos that prove to be unmemorable. Sure, there’s competency in the film’s overall technical production, but the plot doesn’t really keep you on the edge of your seat. I never found myself truly caring about anything or anyone in the story. It may be that the film’s icy and detached tone is to blame, but in actuality, it’s the lack of enthralling story arcs.

After penning mainstream movies like the aforementioned “The Departed”, it appears Monahan wanted Mojave to be a film that breaks all of the screenwriting conventions (without shame and without wonder). For all of its attempts in making a gritty and suspenseful character study that’s set in Los Angeles, look no further than to a recent film that definitely achieves this goal, “Nightcrawler” (strongly written and directed by Dan Gilroy). Despite all of this, what may draw in some audiences is its reminiscent cinematic aura of the Coen brothers. With that in mind, it may make the viewing experience redeemable for some, but not for me. I’m better off watching an ancient re-run of a cat and mouse endlessly warring with each other on YouTube. 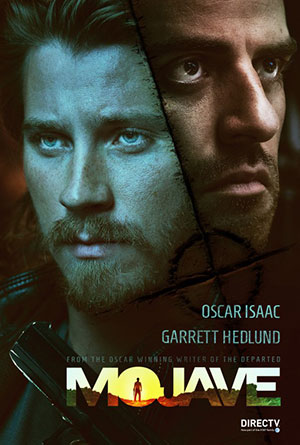