Atmospheric, nimble, climactic; these are a few adjectives that appropriately describe Nightcrawler. Jake Gyllenhaal as Louis “Lou” Bloom, a creepy and impatient swindler turned stringer, is pleasantly disturbing. On the whole, the film from first-time director Dan Gilroy, is a potent thriller that paints a fluent picture of urban nightlife and the creeps that call it home. And though it gets excessive towards the end (which seems to be the norm of feature films these days), Gyllenhaal’s command over his carefully hair-gelled character keeps the audience reeled in. He is haunting and explodes for several extremely memorable, cutthroat scenes.

The rest of the cast members, outside Bill Paxton (“Edge of Tomorrow”), and Rene Russo (“Thor: The Dark World”) may not be household names, but their precision is still praiseworthy too. Especially the acting from Riz Ahmed (“The Reluctant Fundamentalist”), who plays Lou’s hired hand, Rick. Let it also be known, though, that your favorite character at the end of the film will be (thanks to a bit of off-putting tough love from Lou and great product placement), a finely-crafted hunk of metal named Challenger SRT.

Nightcrawler lays out the story of Louis Bloom — an introverted, astute young man who is forced to pay his apartment’s rent by bartering stolen goods to pawn shops. He takes his passion for negotiation, however, and applies it elsewhere after he sees the blue news van of Joe Loder’s come steamrolling onto the scene of an accident. Loder (Paxton) films a few bloody moments with a motorist as a car bursts into flame, and Bloom learns that someone can actually get paid to record these grisly images. Bloom then gets a police scanner and camcorder with pawn store credit, and begins to drive his decrepit vehicle around Los Angeles to find accidents and film them.

After Nina Romina (Russo), a News Director for a local outlet, bites on one of Bloom’s videos he devotes his time to the trade. He recruits Rick (who takes the job out of desperation following a stint with homelessness), acquires new wheels and is soon battling Loder’s crew for the rightful title of “L.A.’s go-to stringers.” Lou Bloom is not content with just getting to the top, however. To ensure he stays there he manipulates, frightens, coerces, tampers, reorganizes crime scenes, breaks into places before police arrive . . . and much more. It’s a formula too shifty to work for long but can Bloom or Romina take their foot off the gas before it all crashes down on top of them?

The strength of this contemporary crime thriller comes from several facets, not only due to Gyllenhaal’s transformative role. Scenes with the Dodge Challenger are ripe with heart-pounding action and the appropriate technical catalysts, and the city’s darkness in which Gyllenhaal slithers adds a new dimension to his character’s eccentricity. Gilroy does a remarkable job at capturing the chases and other high intensity moments — viewers feel like they’re in the driver’s seat with each roar of the motor, tire skid or rumbling idle from the Challenger. Cinematographer, Robert Elswit, also deserves credit for seamless transitions between full frames and the P.O.V. of the characters’ camcorders.

It’s also that a lot of what’s onscreen here in Nightcrawler hasn’t really been seen before — it’s a disturbing look behind the scenes at how the sensational stories we see every night on the evening news are put together. “If it bleeds, it leads,” we’re told as a matter of fact. Especially if it happens to the affluent (we’re also informed that “no one cares about the poor”). News is no longer just reported, it’s manufactured for ratings. It’s a sobering thought to think that even if only a tiny portion of the proceedings on display are true to life, it’s too much.

And though Nightcrawler comes in at a healthy 117 minutes, it flashes by quickly. Like the hyper-sensational newscycle Bloom and others like him do anything to support, there is no time for needless plodding. It’s another good aspect for the film, but maybe we do need to step back on the whole and rethink celebrity and the “do anything for ratings” culture we’ve created. 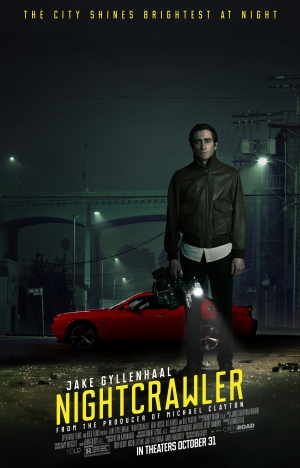