Bona fide Hollywood A-lister, Tom Hanks (“A Beautiful Day in the Neighborhood”), strikes again in Greyhound, a World War II-set drama that drops viewers into the exceedingly cold, choppy waters of the Atlantic in the winter of 1942, as Allied forces attempt to deliver troops and supplies to the European Theatre. Director Aaron Schneider, who makes a return to the big screen after an 11-year hiatus (“Get Low”), brings palpable energy to the frigid compartments of the “Greyhound” — an Allied codename for the USS Keeling, the lead escort/flagship of a convoy consisting of 37 Europe-bound ships.

Schneider and cinematographer Shelly Johnson (“Captain America: The First Avenger”) succeed mightily at the film’s tense, battle scenes — with cryptic echoes on Allied radios from Grey Wolf, the lead German U-boat in a larger “wolfpack” trailing the convoy. Schneider crafts a chilling, realistic tone aboard the ship while giving Hanks’ Commander Ernest Krause free reign over the bridge as the massive vessel maneuvers left, then right, to avoid German torpedoes. Each scene — complemented by an equally thrilling (and eerie) score from Blake Neely — plays nicely into the next; it’s a sequence that neatly captures the fear of the unknown for both troops and cargo shipmen while traveling across the Mid-Atlantic Gap (known as “The Black Pit”), an ocean area lying beyond reach of air support.

Greyhound also benefits from Hanks’ role as scribe (his first screenwriting credit since 2011’s “Larry Crowne”) and his eye for historical detail. And while his character, Krause, is impeccably portrayed, he is still fairly two-dimensional; this is also the case with Hanks’ supporting cast of young soldiers. Nevertheless, period film vet Stephen Graham (“The Irishman”) makes a strong impression as the ship’s second in command, Lt. Cmdr. Charlie Cole.

To more effectively describe the film’s plot, one must understand the challenging position of some Allies in the early stages of the war — with American and Canadian vessels left navigating U-boat-laden seas in order to support their European counterparts. It was left to strong, capable commanders to escort large convoys once the metallic roar of Allied airplane engines could no longer be heard. In this case, Krause has just taken command of the Keeling and is set for his first “crossing.” It aims to be one fraught with death and disaster, but will Krause’s maritime expertise allow nearly 40 vessels to travel safely to the U.K.?

In order to do so, Greyhound, and support ships Harry (HMS James, Britain), Eagle (ORP Viktor, Poland) and Dickie (HMCS Dodge, Canada), will have to fend off a “wolfpack” creeping ever closer to the defenseless cargo vessels. Led by the nervous, but highly capable, Krause, the convoy uses surface radar and sonar to identify approaching submarines — and then must swiftly form defensive positions around the convoy as the subs fire rounds of fast-moving torpedoes. Krause begins to form close bonds with his men, including Lt. Cmdr. Cole (Graham) and ultimately becomes engaged in a firefight with a German sub, alongside Dickie, in a riveting scene that is perhaps the film’s most memorable. Ultimately, the men count the seconds until air support can continue, even as they desperately spray solution on the ship’s windows to rid the destroyer of crippling webs of ice.

Hanks, whose source material comes from C.S. Forester’s novel “The Good Shepherd,” downplays noticeable character development in favor of these thrilling ocean chases and evasive maneuvers. The decision is still mostly a good one — the end result being an edge-of-your-seat, testosterone-heavy war flick that remains entertaining even though viewers can comfortably guess the plotline.

One narrative and visual component that feels wholly unique and lends something to the World War II film canon is the technical precision, visual effects and ultimate delivery of the night scenes. Hanks’ script carefully carries viewers to the convoy’s nighttime vulnerability, and then Schneider and team pack a hard punch with the oncoming U-boat “wolfpack.” Hanks, who shines in his command, then steals the screen as he shouts orders from the bridge and deck. Hanks, Schneider, Neely and the film’s editors, Mark Czyzewski and Sidney Wolinsky, whose touches on the cuts and weaponry truly stand out, put in a group effort that fires on all cylinders. All this is to say that the production values are nearly faultless, in a film that would have wowed theater audiences if not for the global pandemic. Top of the honors, however, go to the cinematographer, Johnson, and Neely’s spectral tunes.

Overall, Greyhound is a gripping war drama that does a nice job illustrating the Battle of the Atlantic (and just one encounter with Germany’s strong wartime Kriegsmarine [“Navy”]). Hanks’ turn as Krause proves his agility and ultimate worth to war/period films. And his script — while not perfect — is worthy complement to Schneider’s direction and other production values. For avid history buffs and fans of submarine warfare, this one could crack your Top 10. 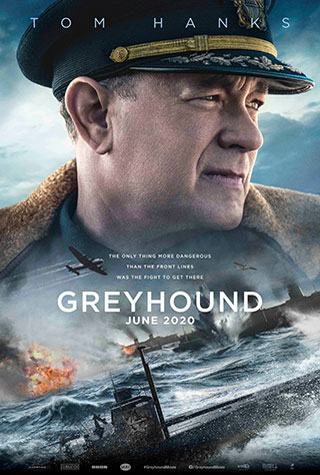