After a long and difficult road for Martin Scorsese’s crime epic memoir, all the ingredients are present for a masterful piece of cinema. The talent includes eight Oscar winners: Director Scorsese, screenwriter Steven Zaillian, editor Thelma Schoonmaker, costume designer Sandy Powell, as well as four Oscar-winning performers — Robert De Niro, Al Pacino, Joe Pesci and Anna Paquin. The dramatic subject matter is also present: Mob enforcer Frank Sheeran (De Niro, “Joker”) and his decades’ long relationships with Russell Bufalino (Pesci, “The Good Shepherd”), Angelo Bruno (Harvey Keitel, “Youth”) and Jimmy Hoffa (Pacino, “Hangman”), president of the International Brotherhood of Teamsters, who famously disappeared. All the elements are assembled for a magnificent movie. However, and it gives me no pleasure to write this, The Irishman is less than the sum of its parts.

Stylistically, The Irishman is more subdued than such Scorsese works such as “Taxi Driver,” “Goodfellas” and “The Departed.” This is appropriate for the subject matter, which concerns Frank reminiscing about his many colorful years of “painting houses” (read: Killing people and running other errands for the mob). Unfortunately, the film becomes languorous and even tedious at some points. This is despite the wheeler-dealing of the mob and the union, as well as the unsanitized and brutal bursts of violence.

There is never any doubt that these men’s lives are inextricably linked as are the operations of government, organized crime and the Teamsters. The documentation of Frank’s long life and his multiple dubious activities should make for compelling viewing. But greatest strength of The Irishman is also its most crippling weakness. The characters are well drawn and the performances are impeccable, but what are they here for?

Frank is a man characterized by ambition, devotion and regret, and De Niro delivers a fine-tuned and nuanced performance across multiple ages, his minimalist delivery not obscured by digital de-ageing technology. Hoffa is a compelling blend of ruthlessness and principle, Pacino recalling the world-weariness of Michael Corleone in “The Godfather Part III” as well as “Insomnia” and “Danny Collins.” Pesci, returning to the screen after a long hiatus (his last live-action feature was 2010’s “Love Ranch”), brings a quiet gravity and unmistakable authority to Russell, ensuring that you never doubt this man’s word, whether it be to help you or kill you. Paquin (“Margaret”) delivers a remarkable performance that is almost entirely silent, speaking only two sentences yet communicating so much through gesture, expression and her seemingly bottomless eyes. Other performances are also strong, but they move in no particular direction and, while the characters are detailed, there is little sense of narrative thrust and not so much arcs as meanders.

These writing issues undermine the performances, and Scorsese also robs his film of tension by indulging his performers and story. Multiple conversations go on longer than they need to, and are virtually repeated as Frank goes between Russell and Hoffa, and back again, then back again in a virtual montage. While the end result is not telegraphed, nor is it a surprise. As a result, it can leave the viewer feeling a sense of “Yes, and?” Set up follows set up, freeze frames and captions mention that this character met with such and such a sticky end, the editing pattern changes from shot/reverse-shot to pans back and forth, but what does it all add up to? Ultimately, not as much as it tries to.

Where The Irishman goes wrong appears to be an instance of too much directorial power and no one telling Scorsese to trim it down or reign it in. It may seem churlish to complain about a filmmaker (especially Scorsese) being allowed to do what he wants, the freedom seemingly provided by Netflix who famously were the only studio willing to fund the picture. Then again, if criticisms of indulgence can be made of Quentin Tarantino and James Cameron, why not Martin Scorsese? The Irishman is clearly Scorsese’s film, encapsulating many of the themes and ideas that have characterized his career. Furthermore, there is a certain amount of pleasure to be had in seeing actors of this caliber given room to breathe and explore their characters. But the longueurs of the script and, yes, indulgence of the director, override this pleasure, resulting in a film that is overlong, ponderous and, regrettably, often boring. 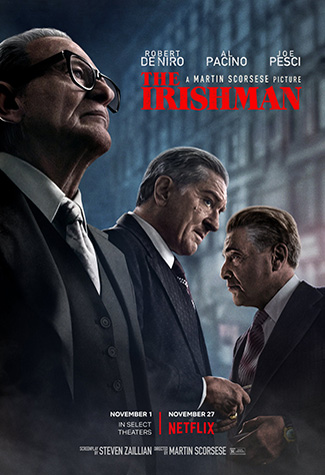