The Browsing Effect is movie that explores how technology has changed the way we begin and behave in relationships. With dating apps like Tinder or Bumble, it makes it easier than ever to meet someone. But of course there is a cost to all these apps, since it brings a measure of casualness into the relationships. Some people are just looking for a mere hookup, a meeting that culminates in sex and ends as quickly as it began. How then do we build meaningful relationships when the people on the other end of these apps aren’t really on the same page?

Michael K. Feinstein’s movie follows the lives of five friends, and it feels very much like the TV series “Friends from College” or even “How I Met Your Mother,” where the audience is invited into their lives and relationships. While The Browsing Effect offers a decent script with decent acting from some of the actors, the production value feels more like a YouTube series than a feature film.

The most relatable of the gang of five is Melissa (Megan Guinan, “Sleeping with Other People”), who is a bit kooky and has difficulties with decision making. She and boyfriend James (Drew Fonteiro, “Patient Seven”) have been together for the longest time, but we wonder if it’s because she wants him or is just afraid of letting go. The couple experiment with dating apps as a way to have fun, reflecting the curiosity they have with regard to what exists outside of their relationship. James becomes a bit too curious, and this is when the relationship goes off the rails. While infidelity has existed long before advances in technology, these apps make it easier to rationalize dodgy behavior. There isn’t a physical element to it — or even if there is — there are no real feelings involved, so that’s okay.

The advent of social media also makes it difficult to move on once a relationship is over. Firstly, your ex is just a text away, and a text is easier to send than making a phone call or instigating a meetup in person. In addition to all these temptation traps is the possibility of stalking them through their social media. Their social presence may not be an accurate reflection of real life, but those happy moments are the ones that you see, creating unnecessary emotional angst that starts feeding away at the psyche like some flesh-eating bacteria. This is why Ben (Josh Margolin, “Deep Murder”) unfriends Rachel (Nikki SooHoo, “Stick It”) on Facebook, as he is unable to deal with the fact that she is moving on.

The movie warns us of the dangers that lurk in the usage of all these apps. Firstly, if you allow unfettered access to your social media, this gives unsavory people the tools to stalk you more effectively. When you check in at a location on Facebook, or tag your location on an Instastory, this allows people to know where you are. Sometimes this could be harmless, like Lawrence’s storyline with Marco (Angel Garet, “Triggerfish”). Lawrence (Larry Powell, “Mother’s Milk”) stalks Marco’s social media and finds out where he works. Then he keeps showing up at Marco’s workplace in the hopes of building some connection. The movie doesn’t truly dive into implications of what could happen if someone on the other end of the app means you harm, though. This is dealt with in a campy fashion, told for jokes and the ha-ha’s, whereas in real life tragedy and consequence could be a very real outcome.

The framing of the stories is similar to “When Harry Met Sally,” where couples are added in to talk about how they met and how long they have been together. Halfway through this falls apart and shows itself as little more than a way to lazily introduce exposition. And not everyone gets the same screentime. Despite Lawrence being a big part of the group of friends, his story gets pushed aside to favor straight narratives. We know more about his four other initially coupled-up friends than we do about him.

Yet at the end of the day, is there enough there for anyone to care about any of these people? No. The Browsing Effect feels like a Tinder date that’s been mistakenly swiped right on — something that looked promising at first glance, but after investing one and a half hours, it shows it has no real substance and it’s time to move on to the next match. 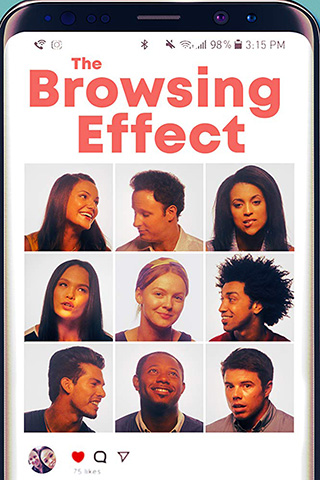