A reasonable question many people may raise regarding Sobibor, a feature film about the Holocaust in general, and about a particular concentration camp, in particular, is what can it add to our understanding of the nature of the “final solution” by those that perpetrated it, and those that fell victim to it? It’s true that Sobibor was one of the only sites in which prisoners revolted, but that alone would only change the dynamics of the spectacle. The key to the success of the film is that it transcends spectacle. The Russian production of Sobibor, the name of the Nazi concentration camp located in Polish territory, may not add to our knowledge of events, but through its episodic structure, may give us a less stereotypical presentation of its horrors. There is no one particular evil doer that stands out (the way Fiennes’ character Amon Göth did in “Schindler’s List”), nor is there a larger-than-life Samaritan like Schindler himself that is presented as the heroic redeemer.

Instead, Konstantin Khabenskiy (“Black Sea”) , who both directed Sobibor and stars in it as Alexander Pechersky — the real-life Russian prisoner of war who leads the uprising — focuses on the day-to-day struggles of camp life, into which ordinary Jews and other undesirables (including captured Russian-Jewish soldiers, who, according to “rules of engagement”) should have been treated as prisoners. But of course, Nazi policies, which helped coin the phrase “crimes against humanity,” had no compunction to break any law they could get away with.

By presenting a breadth of characters — both prisoners and guards — heroism in the film is depicted primarily as the result of the natural human instinct to survive, and evil, as a dark cloud that has entered the marrow of the oppressors, and is allowed to flourish in the absence of any restrictions (a “Lord of Flies” environment). However, instead of the latter work’s asocial children, we witness depraved adults; instead of a remote island, we observe an environment that is geographically in Europe, but walled off from civilization.

What made the true story of Sobibor an unusual one is that a group of victims were able to transform their natural disposition to survive at all costs into action in which they must have — on some level — understood that some of them would die directly as a result of their actions. These dozen or so prisoner/activists were able to overcome their inaction and passivity based on the dim hope they would be freed by advancing Russian forces.

One can conjecture about what made Sobibor different. Was it that the camp housed captured soldiers that had military experience, and the skills and the capacity to commandeer an escape? Maybe. That is historically interesting, but not the central theme of the film. Or was it one individual, Pechersky, whose grim persistence in planning a rebellion and diligence in convincing both his military comrades and civilian prisoners that an escape was feasible? That is also a possibility. However, one of the film’s strengths is that the world of the camp is a complex one presented from several perspectives. On one extreme were those prisoners resigned to whatever fate awaited them to the other extreme: Guards and officers that viewed the camp as a “free fire zone” in which Nazi soldiers took advantage to satisfy their sadistic inclinations. This multiple perspective creates a more robust presentation and allows for a broader interpretation of how the dynamics of this circumscribed world operated. Pechersky is no superhero, which places his decisions on a human level, not an otherworldly one. This suggests that the major motivation behind this Russian production was inspired because of “Russian” heroics moot.

The film also manages to provide a deeper examination of the camp’s Nazi officers. They reveal their pettiness by seeking out the finest clothing and accessories among those confiscated to laud them over their peers. This adds an element of what Hannah Arendt called “the banality of evil,” but also reveals that this so-called banality was a minor point in the Nazi’s final solution. It’s primarily window dressing and not relevant to the core issues and outcomes of the holocaust. Not that Sobibor is simply a case study in how the perversion of human values operated on a day-to-day basis. Such trite moments alternate in the film with scenes that include depictions of individual and group extermination. To have ignored them would have been historically dishonest and would have kept the action on the level of a perverted soap opera.

As the escape plans become more organized and inevitable, genuine tension prevails until the climactic sequence when the prisoners break out, fulfilling audience expectations. This is a requisite feature of cinematically satisfying prison movies. But in Sobibor, the events in the film are never reduced to the level of cliché because they are particularized through the growing determination of the prisoners facing a challenge that at best could be only partly successful.
Khabenskiy portrayal of Pechersky reveals a resolute, imperfect, and conflicted hero. The other outstanding performance is by the French actor, Christopher Lambert (“Bel Canto”), whose portrayal of Karl Frenzel, the Nazi administrator of the camp, is convincing and captivating.

Sobibor is the Russian submission for the Academy Award for best foreign language film. Although the real Sobibor was located in Poland, the film was shot in Lithuania. Besides Russian and German, the languages spoken among those inhabiting the camp include Polish, Dutch, Yiddish, and English. This helps give the film an international flavor, and adds to the complexity of the relationships between its occupants.

To view the film as the victory of courage over despair is probably too celebratory. However, it does present the victory of courage amid despair, which raises the resolution of the film above a “Hollywood” ending. It could provide a lesson in how to develop a theme through character development and the authentic depiction of difficult choices that could challenges its audiences. This may not fall solely on the deaf ears of commercial filmmaking, but it is doubtful that it will be taken to heart by more than a small percentage of them. 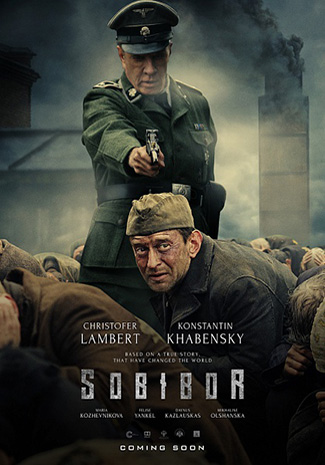