As a boy growing up in Washington Heights, Manhattan, I spent many weekends walking the streets of New York, particularly the Bronx which I walked almost from one end to the other. My small effort, however, pales in comparison with the accomplishment of 37-year-old Virginia native Matt Green who has been walking every street in New York’s five boroughs since 2011. No stranger to adventure, in 2010, Green walked across the U.S. from Rockaway Beach, New York to Rockaway Beach, Oregon, a journey of 3100 miles that took five months.

Directed and photographed by Jeremy Workman (“Magical Universe”), son of Oscar-winning documentarian Chuck Workman (“Precious Images”), and produced by Jesse Eisenberg (“Now You See Me 2”), Green’s New York odyssey is documented in The World Before Your Feet, an informative and often inspiring film that captures the pulse of the city that never sleeps. Carefully planning his route every day on his website (imjustwalkin.com), Matt’s hundreds of photos, meticulous research, and essays about interesting sites are a treasure trove of New York City lore and perhaps an essential guide for every future tour of New York City.

Workman followed Green for three years, a journey that, when completed, will add up to more than 8,000 miles if you include the parks, bridges, cemeteries, and beaches as well as the hidden corners and swamps that he traversed. While the film does not closely examine the character of each neighborhood he visited, or explore the contrast between the lives of the well-to-do and those living on the margins, it is still an impressive trip and Matt is an outgoing and engaging host who has done his homework on the city’s odd characteristics and historic sites. Though he does not refer to himself as being homeless, he is dependent on friends for places to stay and on those who need a cat or dog sitter which he seems to have an inbred talent for.

Having saved some money, Matt claims that his spending is limited to $15 a day and his meals often are limited to rice and beans. We follow Green as he visits the oldest (over 400 years old) and tallest tree in the city, a historic building that for a short time in the early twentieth century served as a birth control clinic run by Margaret Sanger, numerous 9/11 posters and murals, barbershops that contain a “Z” in their name, and former synagogues that became churches when Jewish residents moved to other parts of the city. We also visit the grave of Harry Houdini and colorful characters such as Charles “Mile-a-Minute” Murphy who tested his notion that he could travel a mile a minute directly behind a Long Island railroad train.

We visit with his supportive parents and two of Matt’s past girlfriends who seem wistful about the obsession that drove a wedge between them and ended their relationship. Along the way, Matt meets a cross-section of New York’s 8.6 million (2017 census) residents: Working people, children in the playgrounds, people just walking on the street, or hikers who have similar goals. We meet Jamaican Garnette Cadogan who talks about how he has to sanitize his image as a black man to appear non-threatening, for example, he wears glasses, always carries a book, and stays away from identifying ethnic apparel such as “hoodies.” We do not learn very much about Matt’s motivations but we do know that he was a civil engineer who became tired of sitting behind a desk and felt that life was passing him by.

What we also know from The World Before Your Feet is that he and his brother were involved in life-threatening events that became the catalyst for Green to recognize the impermanence of all things and shift his focus to being present to each moment. What ultimately is driving Green may be unknown, even to him, but we can get a hint of what motivates him by considering the words of Chris McCandless, an American hiker who set off to test if he could survive alone in the wilds of Alaska, “The joy of life,” he said, “comes from our encounters with new experiences, and hence there is no greater joy than to have an endlessly changing horizon, for each day to have a new and different sun.” For Matt Green, his new and different sun has become a daily experience of spiritual awakening, an awakening that he is now able to share with the world.

'Movie Review: The World Before Your Feet (2018)' has no comments 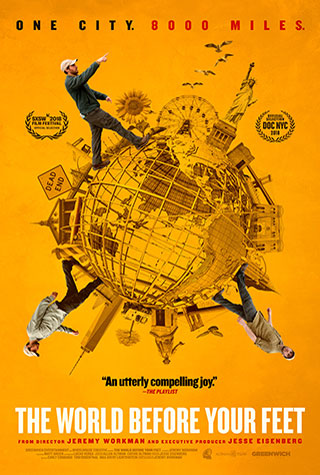