As I have written before regarding movies of this ilk, the trick to any decent film featuring magic, or an element thereof, is to walk a tightrope between being just a bit smarter than the audience (or at least SOME members of it) and not being too accessible as to reveal too much to them.

And while this concept was more than noticeable in 2013’s “Now You See Me,” directed by Louis Leterrier (“Clash of the Titans”), it is especially true with Now You See Me 2 now that Jon M. Chu has taken over. Chu has few feature films under his belt — and these include critical duds “Jem and the Holograms,” “G.I. Joe: Retaliation” and several installments to the awful “Step Up” franchise.

His belief is if the viewer is appropriately distracted enough with loud explosions, frenetic auto chases and camera trickery, the payoff — or reveal — can still be somewhat satisfactory even a second time around, although our tolerance and patience is growing thinner by the minute.

In the first installment of this “Ocean’s Eleven” meets “The Illusionist” hybrid, we were introduced to the “Four Horsemen,” a group of super magicians each with their own special ability. J. Daniel Atlas (Jesse Eisenberg, “Batman v Superman: Dawn of Justice”) is a talented street performer; Merritt McKinney (Woody Harrelson, “The Hunger Games: Mockingjay – Part 2”), is a mentalist and a shake-down artist; Jack Wilder (Dave Franco, “Neighbors”) and Henley Reeves (Isla Fisher, “The Brothers Grimsby”), an athletic (and attractive) professional illusionist.

After an incredible illusion, in which the quartet is “transported” to “rob” a bank in Paris and millions of Euros and then another stunt which sees them take hundreds of millions from corrupt insurance mogul Arthur Tressler (Michael Caine, “Interstellar”), the group is now on the run and off the grid.

All the while, FBI agent Dylan Rhodes (Mark Ruffalo, “Spotlight”) teams with magic debunker Thaddeus Bradley (Morgan Freeman, “London Has Fallen”) to try and corral the Horseman — or are they? The trick — and the curse — of this production is that we never really know what’s true and what is an illusion.

There’s a British term called “one upmanship,” or the art or practice of successively outdoing a competitor. Well in the first film and especially in its offspring, the audience is being one upmanned time and time and time again. And, after suffering through this in the 2013 edition, this reporter kept his eye peeled, believe you me, but, alas, it did no good.

Here in Now You See Me 2, the magicians — short Ms. Reeves, but now with Lulu (Lizzy Caplan, “The Night Before”), a sort of jack of all trades performer who ingratiates herself into the group — are on the run after the Tressler heist and while Rhodes chases them down (after he successfully put Bradley in federal prison), even more trouble is coming for our intrepid performers. It seems Tressler has a bastard son in the form of “Harry Potter” star Daniel Radcliffe (“The Woman in Black”) as Walter Mabry who is out for revenge and uses — surprise! — McKinney’s “evil twin” to accomplish this feat. In an incredible dual role not seen since the “Patty Duke Show,” Harrelson, complete with afro wig and weird accent (why would his accent be any different than his brother’s — don’t ask), uses his superior hypnotic powers, captures the gang and brings them to Macau, the “Las Vegas of China,” apparently, after they jump through a plastic tube in New York City after a planned exhibition goes quite awry.

Through threats and coercion, Mabry extorts the gang to steal a computer chip from a well-guarded facility. These scenes are fun to watch, but an extended sequence in which the disc (hidden within a playing card) soon wears us out mentally and physically.

Needless to write, Now You See Me 2 features any number of these kinds visual prestidigitations, few of which could actually be manifested and that leads to the real problem. No one expects a film like this to be completely based in reality and we want the magicians to make things disappear (except for the plot, at times), but we also want a little truth to be told and not to have everything wrapped up in a final “reveal” to the audience (“You see, we made you think the airplane was really flying by rain and fans, etc.”). The movie also flashes back to events we never saw just to drive the point home just how many unseen clues we’ve missed.

In addition, the Horseman’s amazing ability to hypnotize anyone at will gives almost godlike powers and results in the group prevailing in almost any situation.

The cast of Now You See Me 2 is certainly talented enough for the story, however, with multiple Oscar winner Caine as a huffing and puffing victim, Harrelson and Harrelson as the dopey comic reliefs and a cleanly shorn Eisenberg with his patented cockiness. A bearded Radcliffe is used to the best of his ability.

Unfortunately, Franco is just another pretty face and Caplan adds nothing to the picture except a firm body and a few smart-ass comments here and there. Academy Award winner Freeman is always in good form, while Ruffalo just seems to want to get through with this film, star in a better one and pick up another Oscar nomination.

Plus, there is only so much they can do to keep up with the many misdirections, plot twists and break-neck speed with their shallowly written characters before the viewers just give up the ghost. In fact, other movies in this genre, “The Prestige,” “The Illusionist” and even “The Incredible Burt Wonderstone” at least had more enjoyable and fleshed-out roles.

And while the concluding revelations of “Now You See Me” and its sequel become more and more ludicrous, the buildup is still presented with a slickness that at least LOOKS well enough or makes you BELIEVE it does, anyway. But do not peer too close, you might not like what you see. President Abraham Lincoln was once quoted as saying, “You can fool some of the people all of the time, and all of the people some of the time.” With Now You See Me 2, Chu attempts to make a liar out of Lincoln. 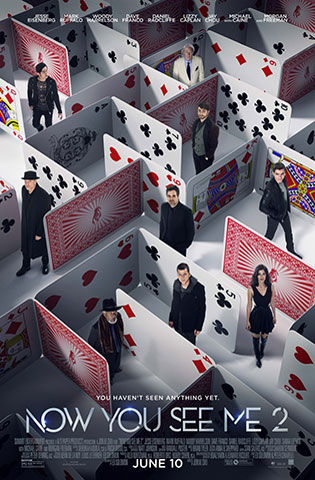