Duncan Jones’ Warcraft certainly has a lot to live up to. After years of dull, uninspired cinematic translations of classic video games, one of the most fresh and promising new directors has stepped up to bat to try his hand at arguably the most popular franchise in the gaming realms. Duncan Jones shined with his low-budgeted debut “Moon” and further honed his craft with the enjoyable “Source Code,” but with an inflated budget of $160 million, is Jones still able to deliver a worthwhile film while working in conjunction with Universal execs?

The result is a film that still manages to entertain, but at times, feels a bit neutered.

The story is, as far as fantasy stories go, fairly generic. On the one hand, you have the Horde, an amalgamation of various orc clans who are in search of a new home as theirs falls apart. Through the power of an evil magic, called the Fel, they lay claim to Azeroth, a world occupied by the film’s human characters. But as both sides struggle for their survival, the Fel begins to corrupt both sides, and both species have to decide between fighting the common enemy or each other.

Right off the bat, the movie throws you into the mythology of the world. For someone who is unfamiliar with the game franchise, it can be jarring at first, but as the movie went on, I found myself being enveloped by it. The scope is large, and it’s clear there is much more to the lore than Jones presents in the movie. The vast amount of names and terminologies used can get overwhelming, but thankfully, it hardly ever disrupts the flow of the film as everything is packed into a concise 123-minute timeframe.

The running time does have its drawbacks, though. Moments that should have more emotional resonance or explanation tend to feel rushed and half-baked, primarily with the lead human character Anduin Lothar (Travis Fimmel, “Maggie’s Plan”). Fimmel has enough snark and charisma to give an amusing performance, but it feels like a huge chunk of his material was left on the cutting room floor. The same can be said for Dominic Cooper (“Need for Speed”) who portrays your everyday honorable king archetype.

One of the only orc characters with dimension is an orc-human hybrid named Garona (Paula Patton, “2 Guns”). Both internal characters are given strong emotional centers and are strangely humanized better than the actual human characters. Patton, under heavy makeup, is convincing enough as the runt of the Horde torn by her allegiance to the humans and her desire to be welcomed by the orcs. But the shining star of this movie is Toby Kebbell (“Fantastic Four”) as the orc chieftain Durotan, who gives a grounded and emotional performance through motion capture technology.

Without a doubt, the strongest component of Warcraft are its visuals. The film maintains a slick, glossy sheen that doesn’t quite look photo-realistic, but purposefully fantastical and stylized. The motion capture performances are what steal the show, though. My jaw literally dropped when I saw Durotan onscreen the first time, and the technology never broke the illusion that I was watching real characters with real emotions. The action sequences are also broad in scope and a lot of fun to watch, especially when the orcs are involved.

The most surprising thing about Warcraft is that it never felt silly. While world-building ideas don’t feel as complete as they should, the movie conveys enough to pique your interest about exploring this universe further. While some of the characterizations suffer, there are moments with both the humans and orcs that are either genuinely emotional or fun. It isn’t the magnum opus we need to give credibility to video game adaptations, but it certainly feels like a step in the right direction. Throw in music from Ramin Djawadi of “Game of Thrones” fame, and you have a solid two-hour popcorn movie. I am unsure if this movie’s box office will persuade Universal to continue the franchise (although it is clearly set up to be), but I am very pleased with Jones’s vision of this world and can’t wait to see more should he return to it. 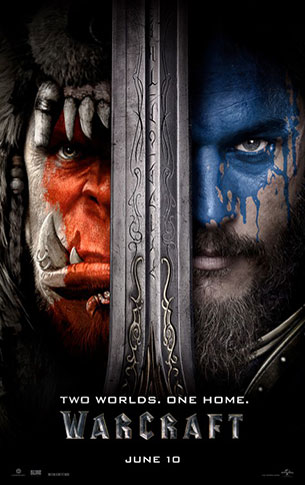