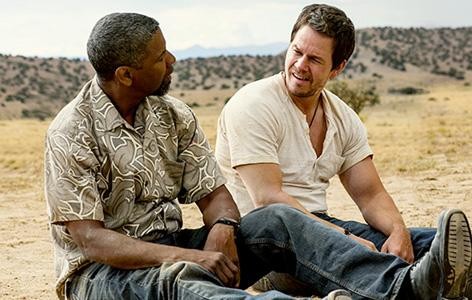 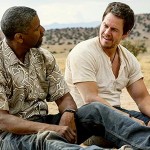 If ever a motion picture suffered enough schizophrenia for a roomful of Sigmund Freuds, it’s 2 Guns, the newest effort from director Baltasar Kormákur (“Contraband“) starring Mark Wahlberg (“Ted“) and Denzel Washington (coming off of his Oscar-nominated turn in “Flight“). While the running thread of the mismatched black and white partners forced to work together has been a staple since 1958’s “The Defiant Ones,” this movie cannot seem to decide if it wants to be a cleverly-bantered buddy flick in that vein, a serious crime drama, a fast-paced tale of worldwide illegal drug operations or a violent action adventure (although there is certainly enough of that latter element to go around).

In the end, it may just be enough to describe it as lightweight — albeit confusing — filmcraft which fills the week, earns a one-time top spot at the box office and is forgotten by the time “Elysium” or “Planes” rolls around. One could do worse than to pay full price to see this, but one would certainly do better to seek matinée fare.

The plot, as equally convoluted as “Contraband,” has Washington as DEA agent Robert ‘Bobby’ Trench, who is in deep cover trying to get close to and bust drug lord Papi Greco (Edward James Olmos, “The Green Hornet“). During a complicated bank heist (that nets more than $40 million instead of the $3 million that was expected) with partner Michael ‘Stig’ Stigman (Wahlberg), who turns out to be a Naval Intelligence officer, the two find themselves wrapped in a mystery and stuffed into an enigma — and on the run from every element in the movie who wants the cash for themselves.

The solution to this deadly dilemma? Combine forces and try to find out what’s going on and who wants them out of the way. Of course, they both hate one another immediately (come on, we’ve all seen these type of films before) and they feel each other out like two boxers, substituting jabs with witty dialogue and ceaseless quips. Soon, with a vested interest in staying alive and attempting to keep each other in that same condition, a grudging respect and mutual friendship emerges. Oh, and then it’s time to blast the bad guys to Kingdom Come.

Yes, the derivative element now rears its head and this buddy picture veers off into a scene of utter death and destruction and — just as suddenly — back again. It’s a pattern Kormákur uses again and again, and while it may provide him and writers Blake Masters (screenplay) and Steven Grant (based on his graphic novel series of the same name) some sense of satisfaction, the herky-jerky pacing of 2 Guns may leave many in the audience trying to both catch their collective breath and wrap their mind around what’s going on. 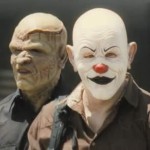 Add decent support from Bill Paxton (“Haywire“) and James Marsden (“Straw Dogs“) as possible traitorous allies/adversaries, and the cast seems up to the task, but the underlying message that the international drug trade is so tempting EVERYONE seems to want a piece of it seems to overwhelm even the most talented on-screen performers at times. Like “The Eiger Sanction,” you will not be able to trust anyone in this film.

One can trust the banter to continue, though, with “Stig” playing the patsy (he’s incredibly naive, mispronounces words and makes some unbelievably stupid decisions that Washington has to somehow correct) while Bobby rolls his eyes heavenward and both continue to blow the villains to small (and very graphic, at times) pieces, drowning out the more cerebral parts of the movie.

With the quality of the two leads, both Academy Award nominees, with Washington a two-time winner, one would expect bigger and better things, as it is, however, 2 Guns fits somewhere above “Fled” and significantly below “48 Hrs.” in the genre pool. Had the director just eased up a bit on the violent aspects and let the leads play off each other more (like Nick Nolte and Eddie Murphy were allowed to do), 2 Guns might have been a much more effective and interesting addition to the category. 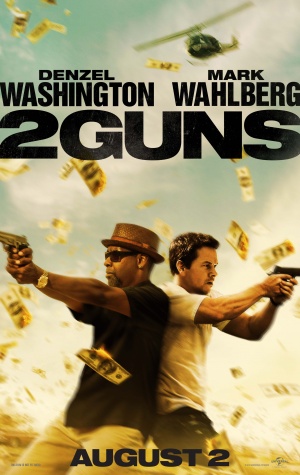