I feel horror movies have grown more derivative than innovative as of late. The recent influx of supernatural horror has begun to wear out the genre’s tropes, and while every once in a blue moon we get a critical and audience darling like “The Conjuring” that’s only after we finish wading through a litany of below-par efforts. Thankfully, 2016 has already had several worthy additions to the genre including “The Witch,” “The Conjuring 2,” “The Invitation,” and even the quasi-horror, but mostly-thriller “Green Room.” But I think one of the strongest of these entries, Hush, has unfairly gone unnoticed, at least by general audiences.

Like the rest of your favorite horror movies of the last few years, Hush was produced by Blumhouse Productions. While it bears a striking resemblance to movies like “The Strangers” and “The Purge,” the movie manages to be a tense and thrilling experience for the viewer that doesn’t let up the tension until the final scene.

Bearing a similar plot to the Audrey Hepburn classic “Wait Until Dark,” the film focuses on a deaf and mute author named Maddie (Kate Siegel, “Oculus”), who has secluded herself to a private home in the woods. While finishing her most recent novel, she finds herself under attack from a masked stranger (John Gallagher Jr., “Short Term 12”), who’s hellbent on entering her home. Cornered and disadvantaged, Maddie is forced into a cat-and-mouse game for survival with no sound, no speech, and nobody around to help. It’s a simple premise that we’ve certainly seen before a thousand times, but Hush isn’t hindered by what it lacks. It’s strengthened.

The movie appropriately avoids straying far from the protagonist’s home, allowing the audience to connect with Maddie’s feeling of both seclusion and dread. In fact, for a character that barely speaks, it’s impressive how quickly and confidently director Mike Flanagan (“Oculus”) is able to firmly get us on Maddie’s side. Let it be known that this is not a movie that is constantly shouting “Boo!” at you, with cats popping out of nowhere and characters getting spooked by awkwardly-placed lamps. This is very much a character-driven movie, and Maddie’s not your typical horror movie idiot. Once she recognizes a threat, she commences Plan A . . . then Plan B . . . then C, then D, and so forth. She examines every possible outcome and does not waste time doing it. In doing so, she becomes both a tenacious and resourceful foe, much to the surprise of the stranger. Credit is also due to Siegel, who co-wrote the film with Flanagan and gives a remarkable performance, bringing gravitas to Maddie and handling the limitations of her character with seasoned finesse (Siegel herself is neither deaf nor mute).

Hush also marks a surprising turn from Gallagher, who is able to break away from the image of his more recent nice-guy film roles. In a way, his affable look makes his character all the more threatening, as if the stranger could’ve been any random person you see on the street. Armed with only a knife and a crossbow, he remains nameless and motiveless throughout the film. The only things we learn about him is that he’s smart, he’s dangerous, and he’s not leaving anytime soon.

Given that the movie has less than 15 minutes of spoken dialogue, the majority of the movie is reliant on its technical elements, and luckily, each department was on their A-game. From the opening frame, sound design plays a huge hand in conveying Maddie’s perception of the world around her. The score organically punctuates each scene while simultaneously growing grander as the stakes rise. There’s plenty of silence in between, though, and the bulk of the tension is amassed from those silent moments with few jump scares and little gore. The movie is only 81 minutes long, but it is always moving, never feeling rushed with unnecessary padding.

If you’re a fan of horror, I’m not going to lie . . . you’ve probably seen this movie in some form or another before. But I don’t think that’s a fair reason to skip this one. Hush is a taut, compelling thriller that admittedly aims low with its gimmick, yet is able to achieve so much because of clever writing and honest-to-God chills. And the best part is that you don’t even have to go to the theater to see it. It’s right there on Netflix waiting for you, so if your friends are over one night wanting to watch something scary, you have no excuse not to check this one out. 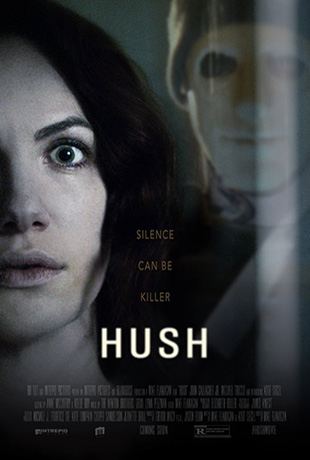