In Monogamish, director Tao Ruspoli (“Being in the World”) explores the benefits and constraints of the union of marriage while grappling with his own public divorce. The film — part documentary, part self-help journey — opens with Ruspoli penning a letter to relationship and sex columnist Dan Savage. The camera captures Ruspoli as he hand writes correspondence in the backyard of his Venice, California home — clumsily cutting away to neighborhood streets at sunset, rain falling on potted succulents as he reads the letter aloud — before embarking on a road trip of self-discovery by way of exploring the history of monogamy and its modern manifestations.

But first, he must delve into his own family’s history with and opposition to monogamy. For Ruspoli, the son of an Italian prince and his much younger girlfriend, this is a very personal story, and he likewise inserts himself directly into the narrative. Without naming names, he is quite candid about his own experience, explaining the effect without quite understanding the cause. Was it just his marriage or is the entire conceit flawed? If the latter, then no one is really to blame when it ends. (Researchers have found that the rate of divorce in the U.S. actually peaked at about 40% around 1980 and has been declining ever since). He looks to his past and that of his family’s to illuminate and enlighten. His family tree, which has been artfully frescoed on the wall of an Italian castle and more recently interpreted by his cousin, is complicated and sprawling. In covering the branches, many marriages were entered into as a means of consolidating power. Trouble sprouts when marriages of passion bloom among its branches. The young Ruspoli experienced the separation of his parents, whom were passionately joined though never married, as a rupture — an inherited trauma reverberating in his relationships to this day.

The film splices together stock footage of happily monogamous couples from old black and white movies (though the issues portrayed in modern life play in shades of grey), a little too on-the-nose reenactments, and a series of talking head interviews in order to explore the concept of monogamous relationships and whether they can be maintained over the long term. Generally, the stock and staged footage is ineffective. Except during one scene in which an interviewee is debunking an outdated myth about marital relationships while a black and white scene, played earlier as a reflection of the representative ideal of marriage, is now rewound until the celluloid image melts into a bright bubble.

The film’s interviews with myriad scholars, therapists, and family law attorneys (with varying degrees of expertise) hit on a lot of interesting ideas: How monogamy aligned with the advent of agriculture so men could be certain they were passing down their property to their heirs; how love and marriage were thought to be mutually exclusive and then in the 20th century the opposite came to predominate public discourse; how government continues to sell women on the idea of marriage (the “marriage industrial complex”) as a means for male breadwinners to assume the burden of supporting women and mothers. Personally, I would have liked to “settle down” and really unpack these ideas. Particularly those surrounding the economics of marriage and its place as a religious institution designed to regulate and control female sexuality.

Since Ruspoli’s ex-wife is now a notable actress, he does well to not mention her by name. But the unfortunate effect is to completely remove her point of view and motivations from the narrative. He admits to feeling “emasculated” as her career took off, a rhetoric that is far too common, and unfairly places the onus on wives to keep their husbands’ masculinity intact. That being said, Ruspoli does capture a sincere moment of recognition on behalf of his mother, who seems to have identified with the ex’s struggle, and perhaps can enlighten her son.

The film’s strongest moments are Ruspoli’s candid conversational interviews with Dan Savage. Which is unsurprising given that Savage first coined the term “monogamish” a few years ago when sharing the arrangement he has with his long-term partner, in which they are committed to each other, but can have sex with others. He touted the arrangement as a practical application for committed heterosexual relationships, not just gay couples. Savage has the rare ability to distill complex ideas and theories to their simplest point. That is what makes him so adept at offering life wisdom without claiming to have it all figured out. Naturally, Ruspoli’s conversations with Savage and his general disillusionment with monogamy lead this narrative toward an exploration of polyamory.

The film keeps coming to back to monogamy as a paradox that couples manage. Foregrounded in analyses of identity and fulfillment and fidelity, there is much discussion of opposing forces within the cultural and social construct of monogamy. In committed monogamous relationships, couples choose to marry their reason with desires, the domestic life with the erotic, opting for the safety and stability of a committed partner as the thrill and novelty of the relationship fades. There exists inherent conflict in staying open to the possibility of love while closing yourself off to other options. For some, the differences are irreconcilable. Monogamish is not exempt from this conflict of ideas. Ruspoli attempts to place his experience within a larger cultural context. For the purposes of this telling, he has chosen the expansive over the limiting, overall divorcing the film of deeper meaning. Ruspoli led with an ending and ends with a beginning (conflicting concepts) with the dissolution of his marriage having brought him to a surprising solution. At least for nowish. 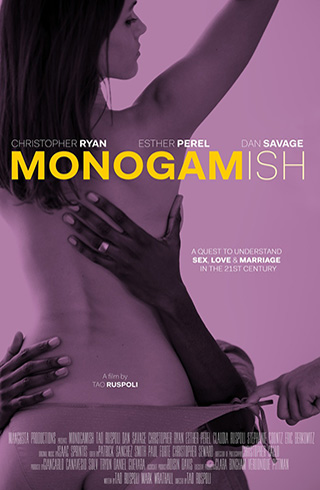