Like a lonely, mysterious gunslinger from the Old West, a tall, slender rugged-looking man with a thick mustache comes to a small Bulgarian village near the Grecian border as part of a German work crew in Valeska Grisebach’s (“Longing”) Western. The man is Meinhard (Meinhard Neumann), in Bulgaria to work on a hydroelectric power station close to the village. He could be Alan Ladd or John Wayne, transported across miles and years to Eastern Europe to conquer the natives, except here the natives are family-oriented local residents who do not carry tomahawks. Alienated by their unfamiliar surroundings, the construction workers hang the German flag in their camp and mock the local residents whose language they do not understand.

One says, “Everything’s messed up here. It’s just like traveling through time, going back to the past.” Remembering the German occupation of their country during the war, the townspeople themselves are not eager to offer any welcome and Meinhard is refused when he tries to buy cigarettes in a local store. Grisebach says that, “It’s very interesting when you have the chance to have empathy, but you instead have contempt, or a conflict, instead of identifying yourself with the other one.” We can sense that a clash of cultures is inevitable, but we do not know in what direction it will take us. Grisebach contrasts the uber-masculine posturing of the construction workers at the camp with the warm family gatherings in the town. With no musical score, the film builds suspense through silences and facial expressions that tell us what words cannot.

Meinhard is treated with disdain by the work crew boss Vincent (Reinhardt Wetrek), who exacerbates tension with the locals by flirting with a young woman out for a swim, an incident that borders on harassment. Though he claims that he is only there for the money, Meinhard is the only worker who makes an effort to bridge the divide with the locals. Finding himself alone on a country road, he hitches a ride with some villagers and begins a friendship with Adrian (Syuleyman Alilov Letifov), one of the local residents. In conversation, Meinhard claims to be a member of the Foreign Legion with service in Afghanistan and Africa which they accept without question. While on a drive in the countryside with Adrian, Meinhard tells him that this is “Paradise,” to which Adrian replies in Bulgarian, “We understand each other.”

It is never clear, however, what is really understood and what is not. Despite the growing closeness of the relationship between Meinhard and the locals, the difficulty in communicating adds to the tension which threatens on several occasions to spill over into violence. There is a dispute about water rights which the crew needs to mix the gravel, a confrontation after a poker game in which Meinhard wins too much money, and an incident when he gets in the middle of a dispute with mafia-like authorities. At one point, after being knocked to the ground, Meinhard asserts that “Violence is not my thing,” though, when asked about the planet, he offers his opinion that it is only the strong who survive.

Grisebach keeps our attention by drawing on anecdotal threads that complement the narrative. A white horse, whose custody is a matter of dispute, is injured when Vincent leads him to a mountain he cannot navigate; Wanko (Kevin Bashev), a young boy whose parents are in Greece to find work, is temporarily knocked unconscious when he hits Meinhard falling from a truck. Grisebach expresses her reliance on narrative spinoffs this way, “It’s really to find how you have this little plot point or a little suspenseful moment,” she says, “and then you create space, more space for atmosphere.” There is plenty of atmosphere in Western, but where it is headed and indeed what it is about is a guessing game throughout. The film’s well-drawn characters and naturalistic look and feel keep us engaged, however, until it erupts in a dance of humanity and one man’s dream of a life filled with the simplicity of friendship and brotherhood. 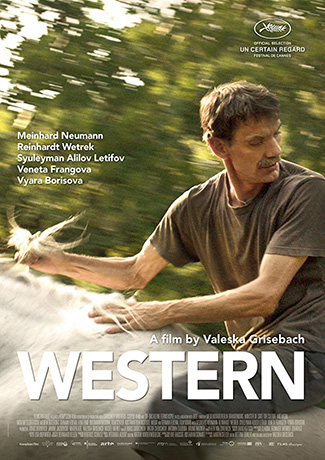