Meredith Danluck’s State Like Sleep is one of those films that, despite disguising itself as a slow-burning mystery, reveals its thesis within the first 30 seconds. During a televised press interview, Belgian actor Stefan Delvoe (Michiel Huisman, “The Ottoman Lieutenant”) elaborates on the greater significance of being an actor, a filmmaker, and a person, “We need stories to make sense of the world. Without stories, the truth is too random.”

Shortly after the instructive sound bite, Stefan is found dead in his apartment from an apparently self-inflicted gunshot wound. His wife, Katherine (Katherine Waterston, “Fantastic Beasts: The Crimes of Grindelwald”), from whom he was currently separated (the result of tabloids publishing photographs of him with another woman), discovers his body in their formerly shared apartment. The sleek, stark spaces are littered with papers, cigarette butts, empty bottles of alcohol, and drug paraphernalia — detritus of his methods for escaping a life lived in the public eye.

Such a statement was given and meant to be taken as musings about the nature of art in a purely professional context, although the substance can just as easily be applied to the self-preservation tendencies of all the film’s characters, who must tell themselves and each other certain stories in order to go on living and explain away the circumstances of Stefan’s untimely death and their own potential involvement in it.

About a year has passed when Katherine — back at her gig as a fashion photographer — receives a phone call that her mother (a well cast Mary Kay Place, “Diane,” bearing a striking resemblance to Waterston) is in hospital in Brussels. Katherine rushes to her bedside and, while her declining health appears real, the event is also a contrived plot to bring Katherine back to Belgium where she must clear out her and Stefan’s apartment prior to it being sold.

In addition to her own, Katherine must also deal with Stefan’s controlling mother, who blames Katherine for leaving her son and, therefore, his suicide. She’s not alone in this sentiment as Katherine seems to place the blame on herself, as well. It’s been about a year since Stefan died and she still can’t make sense of it. Her reentry into their apartment and life together prompts her to begin investigating the details of the affair, who could have leaked the incriminating photos to the press, and whether or not there was any foul play surrounding Stefan’s death. As is often the case with those in states like grief, Katherine is simply going through the motions — tracking down leads, following the trail wherever it takes her, and ultimately constructing a more palatable, but less likely story out of pieces that do not necessarily fit.

State Like Sleep rejects traditional ghost story tropes and shows there are many ways to be haunted by one’s pasts. Katherine is haunted by guilt. Her rather passive investigation is more a means of exculpating herself rather than finding the truth. She is haunted by memories of Stefan, which play out as expositional flickers and flashbacks. We seem them together in bed, happy. We see them dining with his mother, where they celebrate his new role before breaking the news of their intention to move to New York. “I’ll follow you all over the world. I’ll never let you go,” he devotedly teases. And she is haunted by his secrets, mysteries big and small that he kept from her. An accomplished actor, poised for super-stardom in a new blockbuster franchise, Stefan became accustomed to playing many parts, most of which are only revealed in death.

As with most films in which he appears, Michael Shannon (“The Shape of Water”) is the standout here as Edward, a lonely traveler staying in the hotel room next door to Katherine. For both, their trendy Brussels accommodations represent a place apart from the real world. Here, they can dissociate from their real lives and portray completely different people. His seemingly random encounters with Katherine provide the film’s only attempts at humor and real human connection. His character is a well-dressed and, dare I say, sexy potential love interest — a welcomed change from the self-flagellating lawmen he usually plays. Here, Katherine gets to do all the self-harming as well as the investigating. At first, he seems out of place in this dreary world, and then becomes a welcomed visitor. After a few chance mildly flirtatious encounters, Katherine knocks at Edward’s door and propositions a chance sexual encounter. “Doesn’t have to mean anything” she clarifies. To which he responds, “Who decides that?” The film posits that each of us is entitled to meaning, though such assignations are not always universally acknowledged as true. The truth is too random.

In music, fugue is defined as a contrapuntal composition in which a short melody is introduced by one part and successively taken up by others and developed by interweaving the parts. The same application applies here with Stefan introducing the idea of storytelling as a defense against chaos, which is successively taken up by Katherine, Edward, his mother and hers, and then interwoven among them. But sometimes the details don’t add up.

In the end, the characters are empty, vacant ciphers. The frames have blurry edges and backgrounds, like the way faces and places in dreams appear fuzzy to make it clear that what is happening is not real. Without Stefan and their life together, plagued by grief, Katherine has lost her sense of self. And while the characters’ loss of identity and lack of dimensionality is presumably an intended feature and not a bug, it still left me wanting more. Unlike Stefan and his secrets, State Like Sleep fails to haunt or stay with you in any meaningful way, and maybe, just maybe, there is meaning in that. For the one thing it shares is its characters’ emptiness, and just like a dream, it left my mind as soon as it was over. 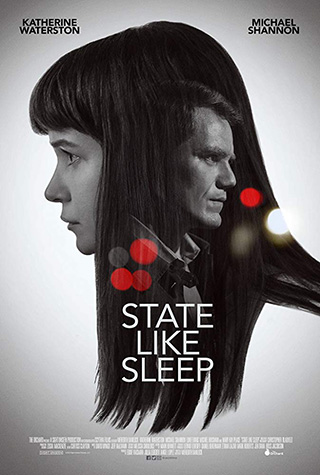