Two powerful lead performances drive Fences, a tale about a black family living in Pittsburgh during the mid-1950s, that, while the overall experience is mostly negative, the impact is nonetheless a powerful and emotional undertaking. The screenplay is adapted from the 1983 Pulitzer Prize winning play by the late August Wilson, which was revived in 2010 with both Denzel Washington (“The Magnificent Seven”) and Viola Davis (“Suicide Squad”) winning Tony Awards.

Here, almost the entire cast returns for the silver screen version with Washington as sanitation worker Troy Maxson, a bitter ex-Negro League baseball player angry that he never made it to the Majors while other, less talented individuals did. He is also upset that he is stuck on the back of a garbage truck and not allowed to drive and seemingly surrendered his life and dreams to care for his family.

The incredible opening sequence has Troy bitching and moaning about his demeaning job, his miserable childhood, his former baseball career and how the white man has kept him down all of this time. His loving wife pooh-poohs his often wild exaggerations (for instance, he claims to have met Death face-to-face, as well as Satan on many occasions), but we see that she has grown weary from almost 20 years of such tall tales. As for Bono, he just laughs quietly and shakes his head. He has known Troy longer than Rose (they met in prison) and has put up with his antics more times than he cares to count. When Lyons arrives to borrow money to play his guitar in a seedy downtown blues club, his father, of course, berates him for his lifestyle, but gives him the cash anyhow.

The conversation here is crisp and clear and real. And is dominated by Washington’s tight grasp of his character — we feel his inner pain, but are repulsed by his own actions towards those he professes to care for most.

We later meet Cory, whom Troy seems to take a special pleasure in humiliating. We never know the exact motivation for this; though it could be that the young athlete is poised to go further in the sports world than his dad, but it’s never made clear. Still, when told that a football recruiter from a college in North Carolina will visit, Troy makes his son quit the prep team so he can work after school at a local A & P grocery store. This, in turn, makes the son (and many in the audience) hate his father even more. Although, a later altercation with Troy makes one wonder just how good a gridiron player Cory really was in the first place.

Finally we are introduced to Troy’s bother, Gabriel (Mykelti Williamson, “The Purge: Election Year,” but better remembered as “Bubba” in “Forrest Gump”), who suffered a severe head injury while fighting the Japanese in World War II. Troy feels tremendous guilt because he used part of Gabriel’s compensation money to pay for his own home. Now, an increasingly demented Gabriel walks up an down neighborhood streets, blows a trumpet and sells fruits and vegetables from a small basket.

During this time of working dredge, drinking gin, complaining and fighting with his sons, we learn another dark secret of Troy’s which ultimately drives the family to the breaking point. And while Washington’s strong-willed, stubborn and sometimes violent character bullies his way to the forefront of Fences, Viola Davis’ Rose more than holds her own against this force of nature. She explodes in two scenes in which we tangibly feel her years of pent-up anger and frustration and bitterly denounces her husband’s shocking betrayal and his almost constant degradation of his loved ones. In the other sequence, she shamelessly defends her husband to one of her children who shows the ultimate lack of disrespect.

This, I suppose, is meant to bring some nobility to Troy, but his entire demeanor during the first three-fourths of the picture suggests and receives almost no sympathy from many audience members and this last-ditch effort to glorify his actions falls short. A jerk throughout most of the film, Troy is likely to be remembered for not much of anything else, no matter what kind of effort is made to resurrect his character’s true motivations.

Also, under Washington’s direction (who also helmed “The Great Debaters” and “Antwone Fisher”), we see that reproducing a stage play to the big screen is not an easy task and there are times that we are so overwhelmed by Wilson’s brilliant writing and wordplay that we do not notice some of the flaws in the production, such as knowing we are watching a filmed stage adaptation most of the time. Nevertheless, the period detail with terrific cinematography (Charlotte Bruus Christensen, “The Girl on the Train”) and art direction (Gregory Weimerskirch, “Southpaw”) bring the streets of 1950s Pittsburgh alive.

Often overshadowed by the leads (both are Golden Globe nominees and should expect Academy Award nods as well, with Davis an early Supporting favorite) the rest of the cast, especially Williamson, Henderson and Hornsby give emotionally-gripping performances and make the experience all the more compelling. It is this aspect that keeps Fences from becoming a “The Last King of Scotland” or a “There Will Be Blood”-like venture, where one or two amazing characters completely dominate the rest of the film (and with leads almost as unlikable as Troy). Here, even though it is not the most uplifting of messages, at least it is one shared by the entire ensemble and brings Wilson’s vivid work to a much wider and appreciative audience. 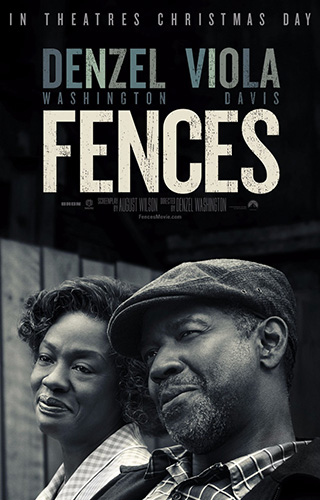