Has the tap finally run dry on boxing movies? It goes without saying that there have been a number of great and enduring contenders in this category with genre clichés modern audiences are instinctively ingrained with, but is there anything else to be expressed within this set-up? If Antoine Fuqua’s Southpaw is any indicator, we may have scraped the bottom of the barrel.

The story centers on Billy Hope — yes, that’s really his name — (Jake Gyllenhaal, “Nightcrawler”), a champion boxer who is seemingly unstoppable in his boxing career and his family life with a lovely, devoted wife (Rachel McAdams, “Aloha”) and daughter (Oona Laurence, “Lamb”) always by his side. But after an unexpected confrontation out of the ring, Hope’s idyllic life comes crashing down when tragedy strikes and his career and family are nabbed from his clutches. Yet when he is at his lowest, Hope chooses to get back on his feet and win back his family and reputation in spite of the heartbreaks that plague him.

That part about a down-on-his-luck guy fighting to make his life worth living again sounds a little familiar, doesn’t it? It might be appropriate to also point out that Hope seeks out Titus “Tick” Wills (Forest Whitaker, “The Butler”) to train him along the way. Wills is initially skeptical and even cold toward Hope, but eventually the two find a common ground and partake in a rousing mid-movie training montage.

Okay. What other boxing movie am I thinking of? I’ll give you a hint: It rhymes with “Shrocky.”

Not to belabor the point, this is clearly a plot that we have seen played out many times before, but this isn’t necessarily a fatal flaw. Provided the story is handled the right way, a formulaic retelling of a tried-and-true tale can at least be enjoyable. And to its credit, Southpaw is delivered quite earnestly and with obvious passion, most notably in the performance of Gyllenhaal who embodies his character with remarkable dedication and naturalism.

The recurring issue that trips the movie up lies in the storytelling which, like our protagonist in the ring, gets the job done, but is kind of sloppy upon inspection. Throughout the story, we’re often only told of seemingly vital plot points through second hand accounts, characters tend to change their outlooks without reason merely to fit in the story’s trajectory and our main antagonist is a cookie-cutter villain who simply confronts Hope with little reason other than he’s on set to be a contemptible dude. (Anyone else getting flashbacks to Clubber Lang and Ivan Drago?)

Yet amongst these complaints, the punch that sends the screenplay (written by TV’s “The Shield” scribe, Kurt Sutter) for Southpaw to the floor is in the overall theme of the story. One may be led to think as we are told that Hope’s anger is what helps him win in the ring, yet his anger also plays a large part in taking his career and family away from him, that the arch of the story is how Hope learns to overcome his anger and be able to live without it. And although he is given mandatory anger management sessions during the story, the audience is not given access to any of this progression. Perhaps the idea was merely leftover from an early draft and cut through rewrites. In any case, after a while, this thread is simply left dangling along with many others to keep it company.

All things considered, the movie has a lot of positive aspects working in its favor, and with the benefit of its fast pace, there may well be plenty of people who are able to accept it on its merits and enjoy it. The trouble is, once you break past these flimsy defenses, Southpaw is a bit of a push-over. 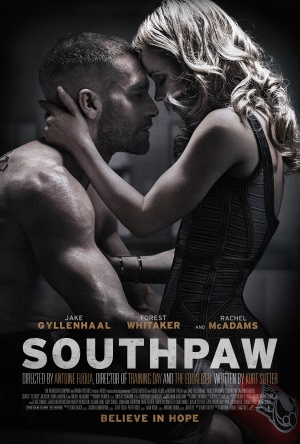