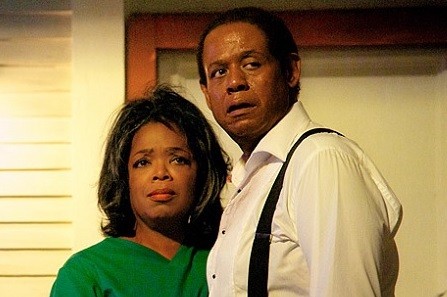 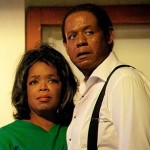 The butler and his wife.

While I am not crazy about a director including his own name in the title of a film (after all, we never saw a movie called “Orson Welles’ Citizen Kane” or “David Lean’s Great Expectations” or “Martin Scorsese’s Taxi Driver”), I can sort of forgive Lee Daniels (who directed the equally obscurely titled “Precious: Based on the Novel Push by Sapphire“) for falling into the fame trap set by Tyler Perry, whose name is on everything he is involved with and whose ego is bigger than his now sizable bank account. Daniels acquits himself fairly well here with Lee Daniels’ The Butler though, a story about a White House butler who served eight American presidents over three decades, and who, like Forrest Gump, seemed to be in the middle of many events which shook those turbulent times.

Befuddled by the title, I assumed that the butler’s name was Lee Daniels, but it is isn’t. It’s Cecil Gaines, and he is wonderfully played by Forest Whitaker, who won an Academy Award for “The Last King of Scotland,” but has appeared in a series of unremarkable pictures since, including “Street Kings” and “Repo Men.” He stoically remains a bedrock while all about him seems to be madness and while viewers wish he wasn’t as immovable at times, he plays the servant with as much pride and dignity as possible.

Gaines begins work in the late 1950s, serving first Pres. Dwight D. Eisenhower (a surprise turn by Robin Williams, “Night at the Museum: Battle of the Smithsonian“) and then John F. Kennedy (James Marsden, “2 Guns“) while the Civil Rights struggle goes on in the background. At first, he doesn’t think too much about it, safe and secure in the White House, until events force him to take a stand.

As time passes, he is embroiled in conflict with his radical son, Louis (David Oyelowo, “Jack Reacher“) and struggles in a tempestuous marriage with wife Gloria (Oprah Winfrey, who, believe it or not was nominated for a Best Supporting Actress Oscar for the role of Sophia in 1985’s “The Color Purple“) who complains because her husband is never home (hey, I wouldn’t be either with a harpy spouse like her). During this time, though, he sees first-hand the violence against Civil Rights workers in the South as well as the rise of the equally reactionary Black Panther movement. 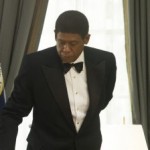 In the Oval Office.

Bear in mind, of course, the tale of Lee Daniels’ The Butler is mostly fictional. Yes, it’s “based on a true story,” but based very loosely. The term “dramatic license” has never been more appropriate as the real subject who did serve eight Chief Executives was a quiet man with a stable marriage and a terrific relationship with his boy. Daniels opts for the soap opera embellishments and much of it runs like a version of “The Help,” only without the distaff point of view. It’s an ambitious endeavor and thanks mostly to Whitaker (who is most impressive in Gaines’ latter years in very realistic old-age makeup) and Winfrey, there are several genuine heart-tugging and lump-in-the-throat moments which help carry it off.

Still, we shall not always overcome Daniels’ penchant for bizarre casting, and he does it again here with the presidents of these United States. Marsden is fine, but Williams as Ike, Liev Schreiber as Lyndon B. Johnson and Englishman Alan Rickman as Ronald Reagan?! Gerald Ford and Jimmy Carter are so unimportant here that that are virtually ignored, but then there is left-winger John Cusack as Richard Nixon and pinko Jane Fonda as Nancy Reagan. None of these actors convince in their roles and seem more like in-jokes than actually serious characters, and almost become unintentionally hilarious which — sadly — diverts much of the seriousness of Lee Daniels’ The Butler away from what it should and could have been. 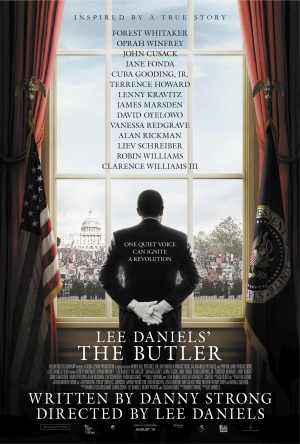