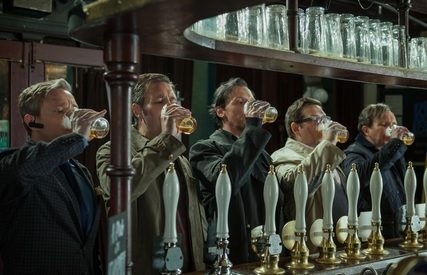 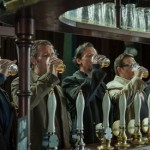 Fueling for the fight.

The “Cornetto Trilogy”, as people started calling it when the prospect of a third film reared its head and we all patiently sat through “Paul,” is surely something to be studied. If you don’t like “Shaun of the Dead,” people treat you like you’re some soulless homunculi poorly imitating human opinion, and with good reason. It’s a perfectly organic story that truly feels like a group of friends filming what they love. It balances genre saviness with an original flare that ultimately makes it a real personal work for Edgar Wright, Simon Pegg and Nick Frost. “Hot Fuzz” (my personal favorite) was a slightly different brand of brilliance. It was as solid as a comedy got. Not one joke fell flat, and that script is just so tightly bound together, you almost wanna put a little bow on top. So the obvious question here is, can this group finish the trilogy as soundly as they started it with The World’s End? The answer of course is yes. Yes? Yeah. I think so. Maybe. Yeah.

As you might have gathered, it’s an unclear matter here. I must hand it to this film, it spares no room for mediocrity. When it’s not shooting bull’s-eyes, it’s shooting itself in the foot. But enough of that, what’s the plot? We have Simon Pegg playing against type as Gary King, somewhat a deconstruction of characters like Shaun or Tim from “Spaced,” where the slacker “free spirit” archetype is taken to its logical, rather pitiful conclusion. Gary realizes his life has been stagnant since an epic pub crawl he and his friends attempted as teenagers. After an intro that establishes every character flawlessly, Gary gathers up his reluctant and now much more mature schoolmates for one last go at the trail through Newton Haven, finishing at The World’s End pub.

Watching The World’s End is strangely anxiety inducing given its excellent spiritual predecessors, and the pressure for it to match them, and in some ways, it’s even better. There’s no denying that there’s more of an emotional crux in this film, with characters invoking a real history together that informs how they act. Pegg and Frost’s characters are particularly strong, with the exact reason for their feuding obscured with references only to “the accident” that tore them apart. It makes for some rather engaging scenes. Frost’s Andy choosing not to drink during the pub crawl, or Gary’s decision to use the death of his mother as sentimental motivation for the others to join him are moments that really round out the characters, and show that Wright’s writing hand and the lead’s respective acting skills have a real knack for male camaraderie. That does, however, hinder the comedy experience slightly. Viewers might be put off by how unlikable Gary gets, forgoing all compassion and responsibility for some childish determination to get nostalgically drunk. Even when there are people dying around him, he’s still determined to get to The World’s End for that final pint. He does have reasons for his actions though; deeper darker, hidden (though not necessarily funny) reasons. That would be fine if the story didn’t seem to damn his wackiness while simultaneously squeezing as many laughs from it as possible. It’s a shame as there’s plenty other potential sources of laughs. Martin Freeman for once isn’t playing the baffled everyman. Eddie Marsan is the almost cute innocent of the group, but he’s no more than auxiliary to jokes, and Rosamund Pike has a brilliant dry dissatisfaction to the whole situation, but she’s soon packaged off to make way for the boys club bonding session.

The robotic replacements for much of the town make for a fun and quite surreal adversary, with their heads that crack like eggs, spewing blue liquid all over the protagonists. This of course means the violence is technically toned down, with fewer shock moments. No one gets ripped to shreds, and no one gets a church spire through the cranium, though The World’s End has a charged energy thanks to, and I’m not kidding, some of the best close-quarters fight scenes since “The Raid: Redemption.” Honestly, it’s all in the way Edgar Wright shoots it, keeping the camera right in the action, but moving the shot from one beat to another without cutting, giving the feeling of being in a real fight. It’s like the dolly was made of butter. No one in the film has any particular combat skills, and they’re all pretty drunk by midway through, but they may as well have been Bruce Lee the way the camera keeps the speed up so smoothly. 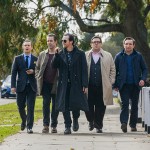 Friends on a mission.

The story reminded me strangely of “Cabin in the Woods,” with a premise that took gradual steps down from the status quo as it went descending — occasionally literally — into madness like a narrative slinky. It’s a fine way of conveying a plot, but it comes with risks, like creating situations the film can’t wriggle its way out of. While the villains are an excellent parallel for commercial imperialist pub chains that have taken over the bars the group remembers so fondly (Starbuckin’ it, as Paddy Considine puts it), and there are some wonderful visual metaphors for character development when you spot them, the final confrontation just sort of . . . stops. It’s like when a standup comedian has no more jokes, so just thanks the audience and leaves. Not saying the finale isn’t climactic, but my god, Evel Knievel couldn’t jump as many sharks as the ending to this film. It’s humorous and inventive, sure, and it’ll be to other people’s taste more than it was to mine, but it just seemed to forget the rest of the film and dive into its own ridiculousness. It felt like the disappointing sequel crammed into the last five minutes of the original.

As a whole, however, I wasn’t let down by any means. The World’s End has plenty of laughs, and a story that’s more than a joy to get into. There are just things that set it apart from the rest of the trilogy in a way that’s disappointing, so I suppose I could go either way on it. Oh wait! Pierce Brosnan does sport an excellent beard, so it gets my recommendation. Go see it!

I'm currently a student of film studying at King's College London. I'm an advocate for cinema as a sense. Feeling films rather than getting them. Experiencing the movies rather than going to them. Bettering oneself through the mere act of watching. Oh and my favourite film is Tremors. 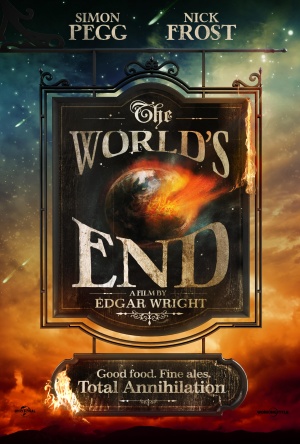