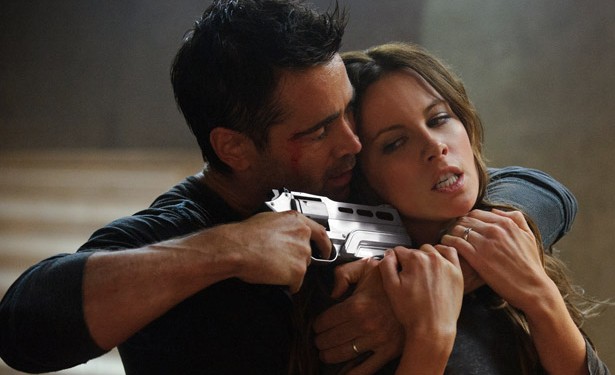 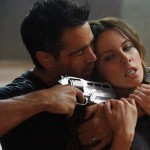 What is real? Some believe it’s everything we can obverse through our natural senses. Others think we’re living a computer simulation. All I know is that, whether real or not, Total Recall, Len Wiseman’s (who’s known for “Underworld” and “Live Free or Die Hard“) remake of director Paul Verhoeven’s 1990 adaptation of Philip K. Dick’s short story “We Can Remember It for You Wholesale,” is real bad.

In post-World War III 2084, Earth is separated into two superpowers, United Federation of Britain and The Colony. From the latter stems Doug Quaid (Colin Farrell), a factory worker relentlessly haunted by violent nightmares. Tired and dissatisfied with his monotonous existence, he stops by Rekall, a company which sells artificial memories. Feeling adventurous, Quaid opts for a secret agent scenario — a trip cut short when the company rep discovers that’s already a reality. When a SWAT team storms the facility (which Doug quickly — albeit unexpectedly — dispenses of), he comes home to his wife Lori (Kate Beckinsale), who reveals herself as the enemy. On the run, he teams up with a rebel named Melinda (Jessica Biel) who helps him decipher what’s real and what’s recall.

In this clusterfuck of post-apocalyptic wastelands, cyberpunk metropolises, and actors who haven’t seen a hit in years, the one thing worth noting is a reappearance of the franchise’s infamous three-titted prostitute (now played by Canadian actress Kaitlyn Leeb). For a movie of such lofty thematic and financial intentions, that’s a hollow victory. Helmed on a budget of $125 million, Total Recall was meant as an obvious technical upgrade; unfortunately, everything’s so uninspired it defeats the purpose. The interiors — bland collages of Styrofoam whites and dirty greys — are disastrous. Meanwhile the milk-and-water cityscapes are ripped straight from superior movies like “Blade Runner” and “Minority Report.” Glazed with heavy rain and grandiose shots of poverty, this is one of the most forgettable visions of techno-gloom in years. 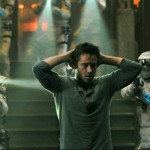 The original had Arnold Schwarzenegger running amok with a funny accent, but sitting through Colin’s performance is like watching honey drip off a spoon. Low-key, one of the more talented actors of this generation, his ambition of being an action hero has worked against his talent playing in independent fare (see: “Crazy Heart” and “In Bruges“). Nevertheless, a leading man is nothing without his co-stars and the wish-washy supporting cast is barely beneficial. Normally “Breaking Bad” star Bryan Cranston (who stars as Vilos Cohaagen, the Prime Minister of UFB) would be a saving grace, however Kurt Wimmer and Mark Bomback’s corny script does him dirty. Even the thirstiest men are destined for disappointment as Beckinsale and Biel in tight outfits is an inadequate consolation prize for the horribleness that follows.

Total Recall is Hollywood trying to peddle plastic as gold. Occasionally, there’s a vague reference to politics used to justify the cut-rate action sequences. Ironically when the characters try acting smart, they end up sounding even dumber. And whilst running with a PG-13 rating meant raking in some more bucks, it was at the expense of the ultra-violence that kept Verhoeven’s interpretation afloat. So for me to even consider recommending this asinine remake, Original Films and Columbia Pictures would have to implant the memory of me being entertained by it. 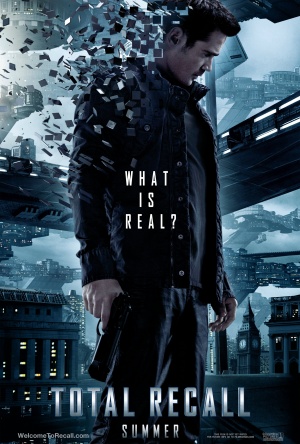