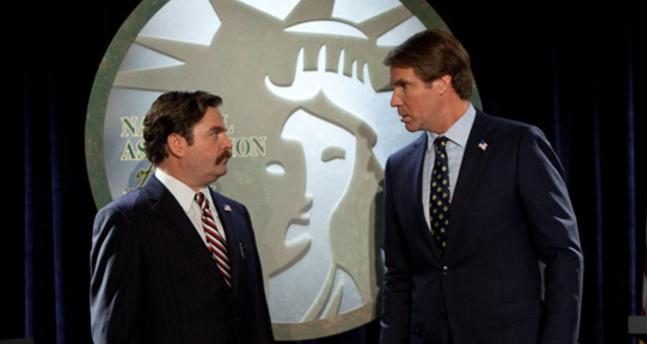 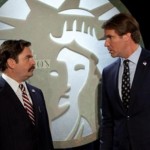 A Republican getting positive treatment in a modern Hollywood film? This IS a trip to Fantasy Land, or “Rainbow Land” to quote from The Campaign, the newest comedy starring Will Ferrell, who, along with Zach Galifianakis (“The Hangover,” “The Hangover Part II“), attempt to parody the current political season with somewhat successful results.

Actually though, both the GOP and the Democratic Party take their lumps in this Jay Roach directed story of a corrupt, idiotic, womanizing incumbent congressman, Cam Brady (Ferrell) who represents a small North Carolina district. Running unopposed (despite several embarrassing foibles — one of which includes a sexually-explicit wrong number phone call to a straight-laced religious family), the Democrat gleefully ignores his sagging poll numbers and the panic that news brings to his increasingly nervous staff.

Seeing Brady’s vulnerability, corporate moguls the Motch brothers (Dan Aykroyd and John Lithgow) draft the son of a colleague, Marty Huggins (Galifianakis), a meek, lisping man-child tour guide with few social skills and no political experience, to challenge Brady. He flounders in an unknown world of slick, personal attack ads and is way over his head — that is until the shadowy Tim Wattley (Dylan McDermott, “Nobody Walks“) becomes his campaign manager.

With Brady making an unbelievable series of gaffs (losing debates with unheard of stupid comments, punching a dog, a baby, getting arrested for drunk driving and running anti-women campaign commercials), Huggins surges into the lead. Not one to rest on his laurels, however, Wattley accomplishes a new low when he secretly films Brady’s son, Cam, Jr. (Randall D. Cunningham) confessing to Huggins that his father is never there for him and then calling Marty, “dad.”

Incensed beyond his ability to remain rational, the elder Cal delves even lower to seduce Huggin’s wife, Mitzi (Sarah Baker, “Bones” and “Modern Family” TV series), as the ridiculous campaign spins out of control with more bizarre behavior that results in both candidates surging to amazing unrealistic leads just days before election day. And then for good measure, a monkey wrench is then thrown into the proceedings, when the evil Motch brothers unveil their plans to “insource” several local factories by actually bringing in groups of cheap Chinese laborers to replace American workers.

Real commentators, such as Chris Matthews, Joe Scarborough, Dennis Miller, Bill Maher, Ed Schultz and Wolf Blitzer, among others, add to the reality (or surreality) of The Campaign, although, few of the scenes in which both men lose their families, friends and self-respect in the nasty little campaign ring very true. 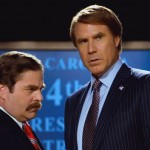 And while Ferrell and Galifianakis (with accents that range from a George Bush-lite to the gay community college instructor on “Family Guy“) do have decent chemistry as the battling opponents who will stop at nothing to win, and there are some genuinely hilarious moments (a short film by Team Brady introducing Huggins to the press is very funny), the movie was unable to sustain the early laughs to come to any satisfying conclusion.

Like an overlong SNL sketch that could not seem to end on a particularly funny note, The Campaign suffers from an identity crisis like semi-recent political comedy, “Evan Almighty,” which substituted real fun for a rather heavy-handed message. Belting little children and dogs also seems a bit far-fetched and violent, as well, but I will take the guffaws that come from these scenes over some of the tepid sequences which plague the latter part of this effort.

That, and another (completely unnecessary) Will Ferrell psychotic meltdown, far too many “F” bombs and scenes that just go on with little or no point, relegate this movie to the “could have been much better” category. Not a total electoral defeat, but not a landslide victory, either, The Campaign will garner more giggles than groans, but with tighter direction and a crisper script, it could have really meant something more — especially in the middle of a very important election cycle. 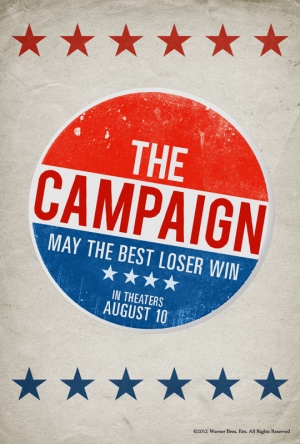