Denis Villeneuve’s last film, 2013’s “Prisoners,” had everything: Gripping story; beautiful camerawork; and a great performance from Jake Gyllenhaal alongside Hugh Jackson. His follow-up Sicario only has the star-studded cast. Emily Blunt (“Edge of Tomorrow”) plays an FBI agent, Kate Macer, who enlists to join an escalating drug war between the U.S. and Mexico, in which her commanding agents, a shady pair played by Benicio del Toro (“Savages”) and Josh Brolin (“Inherent Vice”), are fully engrossed in. Production values may have heightened since the director’s last go-around, but artistically this film flounders.

Villeneuve has said he hates senseless violence in films. Sicario proves that. While suggestion’s more powerful than outright gore you can’t shake the feeling you’ve seen all of these tricks before (probably in a PG-13 thriller). One example being a by-the-numbers close-up of a floor drain, which is filled with dread as a torture victim’s scream chokes the room. In yet another early scene Kate and Alejandro (Del Toro’s role) are on a plane together; he gets shocked out of his sleep, presumably by a nightmare. If they’d ever seen a crime flick before most people could probably guess what’s keeping him awake.

Moments like these, in conjunction with all the implied alcoholism (about every major character gets the shakes at one point or another), give Sicario a contrived edginess. The film’s tagline is “the border is just another line to cross”; seeing how Kate’s so adamantly pushed as the foil to her corrupt cohorts, you pretty much know how the plot plays out. While Villeneuve definitely has the benefit of a dark, desolate atmosphere — created by very sullen, almost lifeless cinematography — his storytelling staggers simply based on the genre’s familiarity. To its credit, however, unlike most thrillers, this film is strongest in its quieter — less moralistic — scenes, like when Kate looks out onto the Mexican landscape and watches the gunfire and explosions.

Most of the film’s pseudo-depth can be credited to Blunt’s performance; her character is expectedly — albeit pretty realistically — shocked most of the time. Part of her bewilderment must’ve been inspired by her co-star Del Toro’s painfully obvious acting (at least hide the fact that you’re a villain, man). Brolin rounds out the cast by playing an asshole (again). In retrospect I’m not sure what “lines” they all cross. A lot of their actions are less about character development and more about pushing the plot towards a finale. Apart from Kate picking back up on her cigarette habit very little changes for any of these people.

It feels like Taylor Sheridan, who wrote the screenplay (his first), thought he’d provided some grand insights into life and death. I haven’t learned anything new. In fact, if any of you have seen “True Detective,” the second season especially, then that’s pretty much what you get with Sicario: Tiresome monologues, chain-smoking, sometimes a shootout. The messages themselves are pretty clear: Cartels are bad; cops can be shitty people; and, no matter how badly it’s scripted, watching them fight one another can be vaguely entertaining. 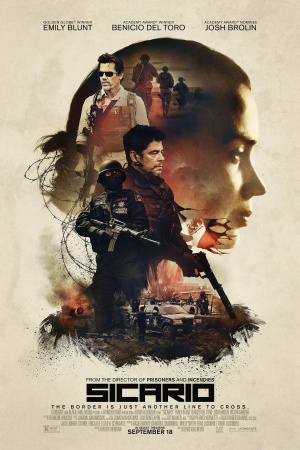