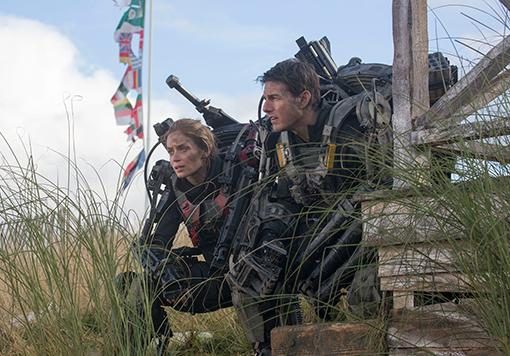 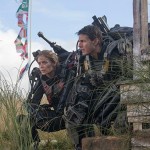 Scouting for a weakness.

Edge of Tomorrow drops us into the middle of a war against an alien invasion as much as it does its protagonist, Major William Cage (Tom Cruise). We don’t know how or why these aliens invaded, and we don’t see the world react to their initial arrival, already making the film differ from the majority of its counterparts. As the script cleverly inserts into a casual conversation though, the reasoning behind the invasion does not matter — it has to be dealt with regardless. And so, with only a few news broadcasts introducing the situation, we come to realize that the entirety of Europe has been taken over, with the enemy tentatively being held back at the English channel.

Cage is introduced as a cowardly, unlikeable man who does PR in the military, and it is very clear that though he wears a uniform, he is no soldier. When he is unwillingly forced into a situation in which he must become one, we begin to like him more and more, with his learning curve proving sympathetic and often hilarious. This curve is fueled by the fact that he dies almost the instant he lands on the French beach at which the soldiers are dropped, proceeding to wake up again at the military base. Living out the day repeatedly, he begins to pick up things and become a better fighter, and it is this learning aspect of this film that makes Edge of Tomorrow often feel like a video game; the main character dies repeatedly only to try again from a previous point in time, but now with a little more knowledge and experience. The filmmakers are not unaware of this either, tipping their hats to the gaming world with a short POV shot when Cage first fires his gun that strongly resembles the look of a first-person shooter.

When Cage meets Rita Vrataski (Emily Blunt), he soon learns that she has gone through this same experience, and that the aliens’ ability to manipulate time has somehow been passed to him. This means that Cage has the ability to start the whole day over by dying, and together the two use this to try to end the war. Emily Blunt is a welcome addition to the film, perfectly convincing as a strong woman and providing an enjoyable chemistry with Cruise. The character of Rita, however, is not as well developed as it needs to be, instead limited by the situation to being a character of necessity — one whose existence outside of the plot is largely ignored. Admittedly, Cage is also rather two dimensional, with Cruise’s charming and suave nature doing much to stop Cage from becoming mostly uninteresting. For a film that centers so heavily on the repetition of a day, it loses the opportunity to make things more interesting by giving the two main characters more personality.

In terms of action, however, it is hard to criticize Edge of Tomorrow, as it perfectly paces the balance between fighting and dialogue, and doesn’t allow any moment to feel too repetitive — not an easy task with such a plot. The screenwriters take particular care also to keep changing the direction of the film, meaning that it never settles into one pattern for too long, and therefore keeps us on our toes. It’s naturally a reasonably predictable film, but director Doug Liman works well within the boundaries of this, instead using clichés as a foothold for humor. The aliens themselves are refreshingly not humanoid, and are a fascinating visual creation; this is particularly spectacular when watching them rapidly dash around the screen in 3D. Visually, much of the apocalyptic side of the world (mostly French countryside) takes on the same color palette and style as the vast majority of such films, and the metal fighting suits worn by the soldiers are not exactly revolutionary. Nevertheless, particularly noteworthy editing by James Herbert ensures that not only does the action and handling of time flow seamlessly, but that the visual clichés don’t become boring.

Edge of Tomorrow is a big budget action film that almost everyone will enjoy, but few will really remember. It does nothing new in terms of its genre, with Duncan Jones’ 2011 time-jumping action flick “Source Code” occupying largely the same area of science fiction. It does, however, manage to repackage itself well enough that it doesn’t seem a chore to get through so much as well-paced entertainment. There are only a few movies that have such a mediocre base but add so many notable smaller aspects that they become genuinely enjoyable and worth watching. This is one of them.