Climate change’s main drivers coincide with the main drivers of economic growth. We cannot have both, it seems. We do not get to preserve the Earth if we get to develop our economic prosperity in it. This is a dichotomy in all its height, an ill-conceived binary that produces nothing but contradiction and conflict, a binary opposition: You can have either but never both. Economic growth, so it would seem, is intrinsic to natural extraction; conservation can only stop development, growth, our inborn right to be better off.

Charles Ferguson’s third documentary, Time to Choose, is an invitation to think beyond this seemingly intrinsic contradictions in our current lifestyles. For years, his work has offered one of the few informed, truly critical lens into the US (and the global) economy, which is, as of today, an economy based on waste. And this is how this film kicks off, looking at our waste: You can see the farts of wealth at each power plant, the piss of power at each polluted river, and the land bleeding, literally bled, at every oil sand. Everything that is released from our current, developed ways of life is a waste that this body, this planet was not designed to digest. And is thus turned into pollution.

Perhaps one of Ferguson’s best made points relies on his insistence that, in the large order of things, very small changes can result in “huge changes in what is like to live in a place on the Earth,” as Nobel laureate and US former energy secretary, Steven Chu, asserts at the prologue of the film. In the case of the climate, which, as has been said over and over again within the last 45 years (and as Time to Choose reiterates quite efficiently), is connected to every little thing on Earth, these little changes will translate into great catastrophes. Climate is the only tangible news we have of the emotions of this Earth. Once it really turns moody, it will claim back the coastlines we once claimed as ours to found almost every major city currently existing on Earth, turning all harbors into havoc.

The main variable in Time to Choose hence is, as in all of Ferguson’s work, time; now, however, he is looking into the future from the present continuous, rather than into the past from the present perfect (as is the case of his two previous documentaries, “No End in Sight,” “Inside Job”). It is the same story, though: You have all the information available, everybody who knows anything is warning you, and you did (are doing) nothing, you continued (are continuing) business as usual. Thus for the first time, a different verbal tense appears in Ferguson’s voice: The conditional. Should things continue this way . . . The race against time is thus, really, a race against power. The technology for clean energy, for alternative ways, is there, but not the power to move it forward, nor the will to change our ways.

And that’s the whole problem that Time to Choose poses over and over again, the juxtaposition, and often times contradiction, between will and power. One of the many simple yet powerful metaphors worth singling out that illustrates this juxtaposition/contradiction comes at a point in which the narrator (Oscar Isaac this time, with a dreamier voice than Matt Damon’s, more appropriate for this purpose) exalts the beauty of Shanghai at night. The image is indeed incredibly inviting. But then we see it in the morning, and is like waking up next to what we thought was a beautiful person the morning after to see them without make-up, uninteresting, gray, almost ashy. There’s the same vista of the harbor, now polluted, with boats transporting coal as though they were moving the shit from the night before. We have conquered the night, conquering with it the realm of our dreams. What we can’t stand is the morning after. A humongous hangover.

This is thus no naïve choice. Having the will to change is, as well, having the will to challenge the wealthiest people in the history of the world, and thus the most powerful. It is as if Ferguson’s films were a series on power and the wealth in which it is sustained. In this case, it is clear (another great point in the film made) that non-renewable resources are much more likely to play the game in favor of authoritarianism, because only in such a world can competition be exercised as a form of survival. There is always a war to fight, a battle to win, an enemy to annihilate. Competition for the same resource must, in this way, be eliminated at all costs. Thus we see what happens with, for instance, the use of pesticides to eliminate insects (plagues) that compete for the same resource, that crap on our crops. Yet this measure creates new problems (i.e., illnesses), which demands new solutions (i.e., medicines), that create new problems, etc. And for each problem there’s a new market awaiting, prowling, with a solution at hand, and yet another market in its back. It is curious that, as is illustrated with the Northern muriqui monkeys, the most peaceful species are always the most prone to extinction.

As I just said, Ferguson’s three documentaries sometimes feel as part of a series, the real collective tragedy of the human race. The real tragedy we see in Time to Choose, as with his previous films, is that although there are protagonists, main perpetrators, there are no victims, the complexity he’s able to keep is enough to make us think that the tragedy we’re in is one in which we’re all complicit, to one degree or another. We did it to ourselves. Yet, what is refreshing of his view is that it is also on us that the solution lies.

The main theme here is energy, in all its forms, and the ways we employ to obtain it — where we get our power from. We suck and bury, litter and bleed the world to obtain our energy, to procure our power, undeliberately releasing toxic leftovers of our practices, making epidemics a new form of genocide. It is the contradiction between deliberation and measure that is on us to solve, everything that happens as a consequence of what we do even though we do not will it that way, because, ya know, we ain’t perfect (i.e., leaks, spills, etc., tumors, diseases, etc.) and everything that we will and cause because, well, we ain’t perfect either: i.e., using undeliberately the resources we have and wanting more of what we don’t. As we know, greed spills invariably — it is designed to leak — that’s its only nature.

It is those who most acutely suffer the consequences of these undeliberate frame of action who don’t even get to enjoy its benefits, which is what we cannot help to think when we see a part of that sixth of the human population who do not have electricity and yet are the main recipients of the consequences of our indiscriminate extraction of resources — even though we didn’t will it this way.

Ferguson’s narrative is helpful to better get the punches; it is a narrative that goes in shots: Shots of data, shots of ideas, shots of horrific images accompanied with even more horrid actions (rarely seen, only told in the light of what they cause, which makes it all more powerful), shots of beautiful images accompanied with maybe just as much kind actions — shots and shots inside an oneiric frame that sometimes makes you feel you’ve gotten inside someone else’s dream . . . or nightmare.

As said before, Time to Choose explores intrinsic relationships, and they are organized in three main parts: Coal and electricity; oil and cars; and food and land. Then Ferguson’s job is to break, repeatedly over the course of an hour and forty minutes, each of these relationships and conceive of alternatives. Breaking dichotomies can lead to the origination of other kind of binaries: Mutually productive binaries.

It is all still about the energy we need and the resources we need to obtain it. Yet the film shows that the kind of energy we use is defined by the kind of life we lead. The kind of environment we live in is determined by the kind of practices in which we are submerged. If our power is oriented towards producing profit, the kind of energy we will produce will be equally directed. This is an energy that seeks no further than the short-term, insular, explosive, which, in the long-run, produces more harm than good. For what is cheap in the short-term (i.e., industrialized food) is necessarily more expensive in time. The faster the profit the less sustainable its practice is. Hence learning long-term-thinking entails learning to think beyond ourselves, which is where all short-terms begin and end, in the borders of our own bodies. It is not the psychopathy of the billionaires that has caused and continues to cause all this harm, but rather the fantasies of everyone below them what keeps it going. Greed is not systemic in this way; it only seems genetic.

If there is one flaw I could point at in this film, this is deeply personal and completely dependent on my personal position. But, nonetheless. There is another (seemingly) intrinsic relationship that Time to Choose chooses not to explore: Technology and development. The reason why renewable energy (and resources) is becoming a viable alternative (so the film goes) is because it is cheaper, economically more viable, and not because it is healthier and . . . just the right thing to do; it is still an economic alternative to keep development going, growth, not an ethical one to keep looking for a better life for everybody. A life in which all can thrive beyond a single gauge to measure how. 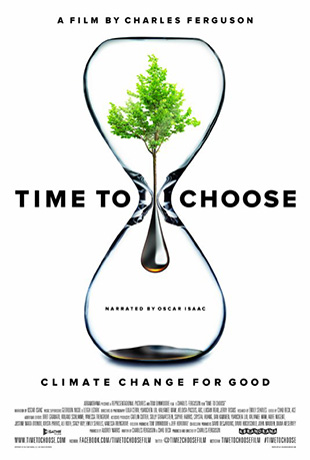