No one has been a bigger critic of films based on video games than this author, but on the other hand, no one is as appreciative of a decent product than him, as well. And while Angry Birds (directed by Clay Kaytis and Fergal Reilly, both longtime graphic artists, but each making their directorial debuts) is abound with simple animation work, it nevertheless brings an exciting vibrancy and utilizes a sharp script written by Jon Vitti (“The Simpsons Movie” and some of the best episodes of “The Office” TV series) to bring a satisfying animated feature to the screen.

It’s no “Zootopia,” but it’s certainly more interesting and endearing that the recent “Ratchet & Clank,” for whatever that’s worth.

Here, direct from the Rovio Mobile video game, the action takes place on the cleverly named “Bird Island,” a bizarro world with more than a passing homage to our own various communities, a loner cardinal named Red (voice of Jason Sudeikis, “Horrible Bosses 2”) with Groucho Marx eyebrows has anger issues (thus the name of the film, I suppose) and everyone in town knows it. After a funny opening where he plays a clown who ruins a child’s birthday party, the birdsfolk have finally tired of him (as anyone would be) and the local owl magistrate, Judge Peckinpah (voice of Keegan-Michael Key, “Keanu”) sentences him to anger management class. But before one can say Jack Nicholson and Adam Sandler, Red meets two other morons in the same bad mood boat; the speed addict Chuck (voice of Josh Gad, one of the many nerds in “Pixels”) and the explosive Bomb (voice of Danny McBride, “Rock the Kasbah”). Among them there is also a huge patient named Terence (a silent Sean Penn, “The Gunman”).

While engaging in a series of exercises designed to lessen their annoyance (taught by Matilda [voice of Maya Rudolph, “Bridesmaids”] and doesn’t work), a ship arrives from faraway “Piggy Island” (at first I thought this was where the kids from “Lord Of the Flies” ended up) led by King Leonard (voice of Bill Hader, “Trainwreck”) who begins to dazzle the wide-eyed, slack-jawed flightless inhabitants with a series of barbecues, hoedowns and pyrotechnic displays (just think a combination Bernie Sanders/Donald Trump rally).

This, of course, is just a diversion as the porkers really only want to steal the birds’ eggs, which they do and then skedaddle back to their lair. Seeking the island’s “protector,” the Mighty Eagle (voice of Peter Dinklage, “The Boss,” but better know for “Game Of Thrones” TV series), the three figure hero worship will not save the day, so Red plans an invasion of the pig world with the help of every underdog film cliché in history.

Do they get their offspring back? Well, you will have to see for yourselves, but Angry Birds keeps the pace up nicely in its 97-minute running time, and peppers the script with enough cultural references and one-liners to keep mom and dad occupied while the little ones can groove on the goofy characters and brightly-hued technicolor emanating from the screen. Beware, however, as some of the jokes will fly right over many heads while others land clearly in the off-color section, and some of the scenes might be a bit intense amidst all of the silliness. 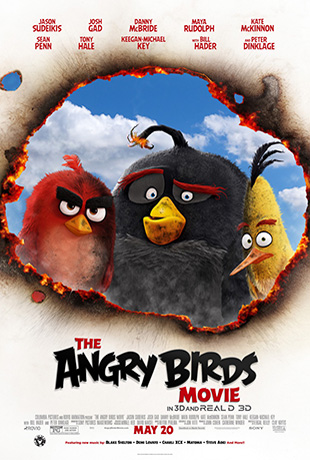