There is something satisfying about five thirty-something men going into an afternoon screening of an animated “children’s” film that features talking animals, and noting other audience members of a similar age. That was my experience of Zootopia (re-named “Zootropolis” in the UK), as myself and four friends of a similar age found ourselves in a sparsely populated cinema where the average age of the viewer was over twenty. This must have been a bad time for young audiences, as a global box office take of over $860 million indicates that audiences have been flocking to Disney’s latest animated feature. The fact that my friends and I all enjoyed it immensely demonstrates that so-called “family” films offer something for all ages, and co-directors Byron Howard, Rich Moore and Jared Bush offer a story that is inspiring, animation that is gorgeous and immersive, and an entertaining engagement with genuinely serious themes that never overwhelms the drama.

Zootopia is a brilliantly designed world in which anthropomorphized mammals have developed beyond their natural instincts of predator and prey. An opening sequence explains this and the opportunities now available to mammals of all shapes and sizes. For protagonist Judy Hopps (voiced by Ginnifer Goodwin, “Something Borrowed”), the opportunity she pursues is to be the first rabbit in the police department of the eponymous city, a shining beacon of civilization and community. Wolves can be actuaries, lemmings can be accountants, jaguars can be limo drivers and an arctic shrew can be a crime lord (really!), but can a bunny make it as a cop? Despite being brought up in farming community Bunny Burrows by her parents Bonnie (voiced by Bonnie Hunt, “Cheaper by the Dozen 2”) and Stu (voiced by Don Lake, “Grudge Match”) and her many, many siblings to raise and sell carrots (obviously), Judy resolves to serve and protect in the city of Zootopia, where trains have different-sized doors for giraffes and mice, beavers build roads and sloths staff the Department of Motor Vehicles. But as one might expect, there is trouble in paradise, and Judy quickly learns that Zootopia is far from a utopia. Although she graduates top of her police academy class, Judy’s (literally) bullish captain Bogo (voiced by Idris Elba, “Beasts of No Nation”) initially assigns her to traffic duty. When she encounters a cynical con-artist fox Nick Wilde (voiced by Jason Bateman, “Horrible Bosses 2”), the stage is set for a comedy adventure of mismatched buddies, hilarious hi-jinks, socio-political intrigue and instinct versus intelligence.

Cramming that much material into a family film might sound like a tall order, but the wit and brio of Bush and co-writer Phil Johnston’s script ensures that the film never feels overburdened nor its content seem jumbled. Exposition is neatly tied to theme that is itself tied to character. The narrative is a detective story in search of missing mammals, first mentioned in Bogo’s briefing to his officers. This investigation is described as a top priority, but Judy is excluded because neither Bogo nor anyone else takes her seriously as a cop. Bogo is therefore prejudiced, a theme that the film explores in relation to race, gender and even sexuality, with a very cleverly “queered” character. The film is therefore strikingly progressive in its engagement with this theme: In an era when fear and hate are so prominent in social discourse, it is truly wonderful to see a mainstream entertainment producer like Disney criticizing the evils of prejudice and celebrating the benefits of diversity. The film displays this visually such as when Judy is dwarfed by her fellow officers including rhinos, hippos, tigers and bears, and when Nick attempts to purchase a popsicle from an elephant-run ice cream store. The visual invention extends to the environments as well, as Zootopia is divided into climate-controlled districts including Tundratown in constant winter, Little Rodentia where the buildings are the same size as our diminutive heroine, and Rainforest District that is structured on many levels. These different areas offer such a wealth of visual detail, with so many blink-and-you’ll miss them moments, that the film is bound to reward repeat viewings. There are also several genuinely thrilling set pieces including street chases, tree-top swinging, surreptitious searches and a subway scramble.

If all that wasn’t enough, Zootopia is also very funny. I started laughing within the first five minutes and spent most of the film with a big grin across my face. The humor includes familiar brands such as Apple and Starbucks getting an animalistic twist, as well as riffs on “The Godfather” and “Frozen,” and hilarious character moments, such as Mayor Lionheart (voiced by J.K. Simmons, “Whiplash”), a gangsta fox, an out of shape cheetah, and the DMV sloths (a scene much trailed, but still hilarious). There are also triumphant moments when Judy and Nick outwit their adversaries, who come in many shapes, sizes and colors. Nor does the film talk down to its younger viewers, as the police investigation, criminal infrastructure, politics of City Hall and media reaction are all handled in a way that is informative, narratively comprehensive and, more often than not, funny. Even the end credits provide further fun, with music star Gazelle (Shakira) delivering a song that is heartwarming while also toe-tappingly enjoyable.

All things considered, Zootopia is a wonderful experience for all ages. I can’t recommend this film enough, for its wit and imagination, its clear-storytelling that intertwines micro and macro goals, its laudable message about the importance of tolerance and diversity, and most of all because it makes me happy. 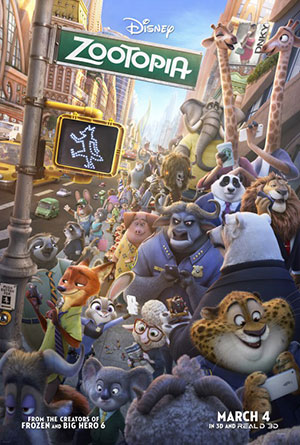