There is no denying that New York City is the most magical of places to celebrate the holidays. But when you’ve lost a loved one, the sparkle of the season can dwindle to the lowest of lows. That’s the subject matter of Daniel Tenenbaum’s A New Christmas, a romantic tale that examines the simultaneous joy and loneliness of the city (and its surrounding boroughs) during the most touristy time of the year.

As a fellow New Yorker who has spent much of her time on the Metro-North and the subway as most do in their respective cars, the glitter of Rockefeller Center and the energy of the Bryant Park shops can fade to a dull hum when the stress of the real world comes into play. And when it comes to the main protagonist of A New Christmas, Kabir (Prashantt Guptha, “The Tashkent Files”), the melodic tones in his mind are currently on mute. Not only is he grieving over the loss of his mother, but his relationship with his wife, Shivaani (Preeti Gupta, “Unfreedom”) is quite rocky. Clearly, Kabir’s life is in the hottest of messes.

But there is a change in the air when Kioni (Grace Wacuka), an aspiring film student from Kenya, crosses Kabir’s path. According to a very vocal homeless woman, there is an instant sparkle between these two, the kind that prompts them to go on a magical Christmas crawl throughout Manhattan. The kind that, in true cinematic tradition, leads them to get a case of the warm and fuzzies. But with the shadow of Kabir’s marriage and his mother’s death hanging over him, what will come of this new development? That’s the kind of answer that only a viewing can (hopefully) solve.

At its purest essence, A New Christmas features a sweet premise that is entirely familiar while also feeling fresh — due mostly to its diverse representation that is still (even in 2019) lacking in mainstream Hollywood. But even with a cast and crew that is putting their best foot forward, it is the execution of this cinematic Christmas tree that falls similar to that of the one owned by a boy named Charlie Brown.

From the film’s first few stock-like shots of various New York City holiday landmarks, coupled with some awkward font choices, Tenenbaum seems like he’s attempting to evoke a Hallmark movie aesthetic yet with a story that is too complicated for such a “genre” ever to achieve. It’s a commendable effort for sure, but the final product ends up feeling like two magnets that always keep meeting up on the wrong side.

Right from the get-go, there’s the obvious issue that this film is the most indie of indie productions. Featuring the kind of occasional slip-ups that many ignore when it comes to student films, once you get passed a point in your career, such mistakes are ultimately inexcusable. From unfortunate sound design to sloppy edits left and right, it’s a shame that a plot with such potential (even in a TV Christmas movie-style) falls down to the cinematic depths due to amateurish mistakes.

The same can be said for the handling of the film’s cast. Every member of this ensemble seems like they’re trying their best to get a proper grasp of the material handed to them. But with Tenenbaum’s lackluster direction and a script that is clunkier than a piece of coal in a stocking, every character comes off just as lifeless and messy as any in a Tommy Wiseau production (minus the fun of throwing a football or the petting of a flower shop dog).

But when the last frame of this film fades, the ultimate sentiment that describes A New Christmas is simply this — “what a shame.” What a shame that the efforts of talented individuals were wasted on a project that couldn’t get it together. What a shame that a story that had some interesting elements couldn’t be presented in a more polished manner. And finally, in a time when we need to hear from more diverse voices (even in the genre of silly holiday movies), what a shame that this is the best we could get. 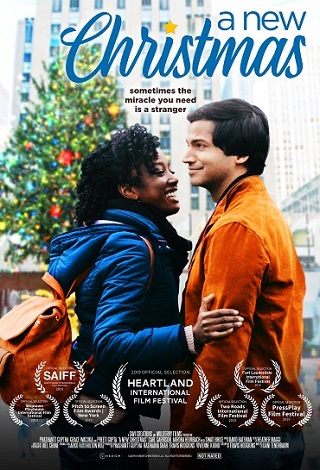