“For a long time after the war I was afraid of the sky, even of raising my head towards the sky. I was afraid of seeing plowed-up earth. But the rooks already walked calmly over it. The birds quickly forgot the war” — Svetlana Alexievich, “The Unwomanly Face of War”

During World War II, the German blockade of Leningrad cut off the city from the outside world for three years, an act that took the lives of over one million people. While the world has largely focused on the causes and details of the siege, little attention has been paid to how survivors coped with their trauma, suffering which the Russian leadership did their best to hide. Winner of the FIPRESCI Prize and the award for Best Director in the “Un Certain Regard” category at Cannes, 27-year-old Russian director Kantemir Balagov’s (“Closeness”) Beanpole (Dylda) focuses on the relationship between two young women who have returned to Leningrad (today St. Petersburg) from the front in the immediate aftermath of the war.

Brilliantly performed by Viktoria Miroshnichenko as Iya Sergueeva, a nurse nicknamed “beanpole” because of her height and slender frame, and Vasilisa Perelygina as Iya’s mercurial friend Masha, it is an intense examination of damaged people desperately trying to find some peace and connection during a time when the world no longer values it. Russia’s official submission for Best International Feature Film at the 2020 Academy Awards, the film was inspired by Nobel Prize winning author Svetlana Alexievich’s “The Unwomanly Face of War,” a devastating chronicle of women’s experience during the war. Beanpole opens in a hospital for wounded soldiers after the war, many whose bodies are so desperately shattered that they long for death. Stepan (Konstantin Balakirev, “Angels of Revolution”), one of the most badly injured, is paralyzed below his neck and pleads to the nurses for death, but it is not possible under the law.

Iya has a supportive relationship with her superior Dr. Nikolay Ivanovich (Andrey Bykov) and works with him to secretly euthanize patients who will not recover from their wounds. Suffering from post-concussion syndrome, now known as post-traumatic stress disorder (PTSD), Iya is subject to sudden seizures, spasms in which she cannot talk or move and is unable ask for help. Her condition tragically manifests itself in an extended sequence that is most difficult to watch. The atmosphere of decay is underscored in a scene in which the patients at the hospital play a game with Masha’s young son Pashka (Timofey Glazkov). When they ask him to bark like a dog, he only stares at them without expression. “How would he know what a dog is like,” one man says. “They’ve all been eaten.”

The focus of the film is on the relationship between Iya and Masha, one that is based both on mutual need and sexual attraction but also contains an element of exploitation. As photographed by cinematographer Kseniya Sereda, the film is shot in faded pastel colors of red, green, and ochre rather than in black and white which the material might suggest. As Balagov explains, “The green that we use is also about being alive, but the ochre symbolizes the wound. And red is also the color of rust and blood.” When Masha returns from the front where she remained to seek revenge for the death of Pashka’s father, she is intent on having another child which she believes will heal all of her internal wounds from the war.

Sadly, the number of abortions she had during her time at the front prevents her from having any more children and she demands that Iya bear her a child with a surrogate. Masha’s exploitation of her friend strikes a jarring note and the look on Iya’s face when she is forced to do something against her will threatens to destroy her relationship with the only person she can turn to. Using men to fill a void in her life, Masha develops a relationship with Sasha (Igor Shirokov), the son of upper-class Communist bureaucrats. Assured that he loves her, they plan to marry until a visit to his parents in their mansion outside of the city prompts Masha to confess a disturbing truth about her life. In one of the film’s most striking moments, Sasha’s mother Lyubov Petrovna (Ksenia Kutepova) clashes with Masha, telling her what she sees as the truth about Sasha’s intentions.

Beanpole is an intense, impeccably acted examination of repressed emotions and spiritual emptiness in a world in which normalcy is an outdated concept. In an astonishing scene, Masha asks a neighbor, a seamstress, (Olga Dragunova, “Closeness”) if she can twirl in a green dress the seamstress is fitting. As Masha spins faster and faster, however, the delight she experiences turns into an outpouring of grief. While Beanpole is bleak, it is made with such consummate skill that it is not depressing. With its humanism and compassion and its willingness to tackle issues such as feminism, bisexuality, and abortion, Balagov challenge to Russia’s conservative social outlook and patriarchal society gives the film a surprising political edge. It also makes clear that Balagov is one of the best young directors in film today. 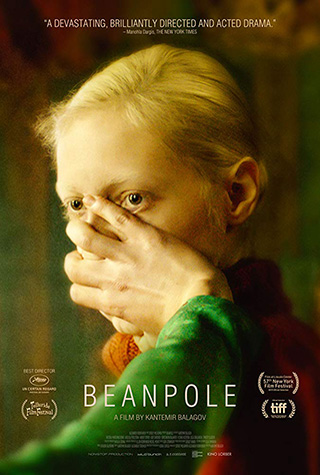