Stating that history is determined by the struggle between the ruling classes (the exploiters) and the oppressed classes (the exploited), nineteenth century German philosopher Karl Marx blamed poverty and starvation on the evils of capitalist society and declared that class conflict could only be ended by the overthrow of capitalism and the building of a socialist society. Co-written by Raoul Peck and Pascal Bonitzer, the first film produced about Karl Marx outside of Eastern Europe, Peck’s The Young Karl Marx (Le juene Karl Marx) humanizes Marx, making him a sympathetic family man as well as a charismatic leader willing to confront antagonists on the democratic left, portrayed as ineffective idealists.

Peck, whose last film “I Am Not Your Negro” is a powerful exposition of the ideas of author James Baldwin, has chosen to play it safe in his latest work, however, transforming Marx’s radicalism into what is mostly a conventional biopic that, while highly watchable, offers the viewer few challenges. Relying on the letters between Marx (August Diehl, “Allied”) and his long time companion Friedrich Engels (Stefan Konarske, “Valerian and the City of a Thousand Planets”) to fill in the details, the film centers on the period between 1843 when the 25-year-old Marx was eking out a living in Paris writing essays for political journals, and concluding in 1847 with the writing of the Communist Manifesto.

Opening in Paris where Marx is living with his wife, Jenny von Westphalen (Vicky Krieps, “Hanna”), an aristocrat who gave up her material comforts to support her husband, Marx’s essay on poor people who were killed for gathering dead wood in a forest, then a punishable offense, is considered subversive enough for the journal “Rheinische Zeitung” to be closed by the government and move Marx close to poverty. The scene shifts to a factory in Manchester, England where Engels, the son of the factory owner, storms out of the room when Mary Burns (Hannah Steele, “Darkest Hour”), an Irish worker, later to be Engels wife, stands up to protest against the deplorable conditions in the workplace.

Turning his back on his class upbringing, Engels begins to consort with European philosophers and radical thinkers, associations that eventually lead him to Karl Marx who, after some nasty verbal sparring, form a strong and lasting connection. Marx, who welcomes financial support from Engels, becomes involved with debates with German radical Wilhelm Weitling (Alexander Scheer, “Pirates of the Caribbean: Dead Men Tell No Tales”), as well as with French anarchist
Pierre-Joseph Proudhon (Dardennes’ regular Olivier Gourmet, “The Unknown Girl”), who criticizes the new world of assembly-line labor and how he doesn’t want to be “a scribbler urging world revolution.”

When Marx and Engels are accepted as members of the “League of the Just,” they assume control and transform it into the Communist League, proudly reading their co-written Communist Manifesto, a pamphlet that lays out the core ideas Marx would later expand upon in “Das Kapital.” The Young Karl Marx is a film of good intentions which stands against those who marginalize independent thinkers rather than consider what they have to say. Peck rightly credits Marx for formulating the ideas that led to the first major working class political party and for his call to end child labor, wage slavery, inhuman working conditions, and abject poverty.

There is no counter, however, to Marx’s assumptions about class struggle being the root cause of all the world’s ills, about Marxism’s disdain for individual rights outside of the class struggle, or about religion being solely motivated by the suffering of the working class. While Jenny lovingly calls Karl, “my lovable atheist Jew,” what is ignored is that Marx’s lumping together of Jews and capitalists as one entity devoted to individualism, selfishness, greed, and egoism is basically the classic theme of anti-Semitism. 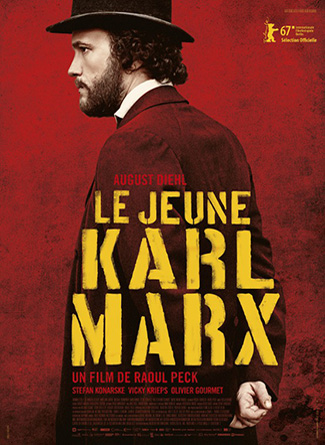