If one likes their World War II films with a healthy dose of F-words, open lesbianism, cocaine use and sexual acts too numerous to count, then the newest Paramount release, Allied, is certainly the picture for you. A mix of “Casablanca,” “Hope and Glory,” with even a little “Inglourious Basterds” thrown in, this romcom war/thriller mishmosh features Brad Pitt (“The Big Short”) and Marion Cotillard (an Academy Award winner for “La Vie en Rose” and nominated for “Two Days, One Night”) as star-crossed lovers during the North African Campaign who carry on their love affair in London during the final days of the Blitz.

As for this scribbler, forget the loves stories and give me the unblemished heroics of “Saving Private Ryan,” “The Great Raid,” “The Longest Day” or “Hacksaw Ridge,” to name only a few.

Still, they say if you’re going to steal, steal from the best, so right away we notice that Allied takes liberally from the 1943 Best Picture Oscar classic, “Casablanca” (directed by Michael Curtiz) when Canadian Intelligence Officer Max Vatan (Pitt) parachutes into the North African desert in 1942 and soon meets the beautiful, but deadly, French spy, Marianne Beauséjour (Cotillard). Together, playing husband and wife, they infiltrate the occupying German government, outwit the French Vichy police authorities and assassinate the Nazi Ambassador.

They also slowly fall in love culminating with crazed sex during a sandstorm (is there any other kind?), which is easily one of the best automobile make-out scenes since Leo and Kate did it in “Titanic.”

The plan comes together without a hitch and it’s all so simple, one wonders why the Allies didn’t win the War in just a few weeks. Anyway, to make a long review even longer, the couple travels to London where the Germans are seemingly bombing the city constantly (although in reality, the attacks grew less frequent as German pilots and aircraft were spread over other war fronts, including the Soviet Union). Here, the couple marries — against the advice of Max’s British upperclass twit friend, George Kavanagh (Daniel Betts, “Fury”).

Nevertheless, they say their vows and soon Marianne gives birth in the middle of a bombing raid. With Max working for British Intelligence and his loving wife tending to domestic duties, director Robert Zemeckis (“The Walk”) feels the need to satisfy modern (and liberal) sensitivities by throwing a lesbian couple, including Max’s sister, Bridget (Lizzy Caplan, “Now You See Me 2”), in our face for no other reason than to placate certain segments of the American electorate that “Hacksaw Ridge” may have alienated. Along with this, Max and Marianne continue to copulate and a brief scene featuring an English soldier indulging in blow and cast members dropping more F-bombs than the Nazi’s dropped buzz bombs made me wonder just what Zemeckis was trying to get across: Was it that those who fought Fascism and Japanese militarism in those days were in reality all just profane, same-sex stoners? Your guess is as good as mine.

Trying to get back on script, Max is informed by his superior, General Frank Heslop (Jared Harris, “The Man from U.N.C.L.E.”) and a high-ranking intelligence official (Simon McBurney, “The Conjuring 2”), that his lovely wife is actually a Nazi spy. He objects, obviously, but they order him to plant false information over the weekend to see if she takes the bait. He is also admonished not to divulge or investigate the case himself under the penalty of being hanged (the British answer to EVERYTHING in those days . . .). If found guilty, however, he must execute her with his own hand (see, the Brits were funny that way, too).

Thus, the third act of Allied is set up and, of course, Max investigates the case himself (what kind of Brad Pitt film would this be if he DIDN’T go rogue?) In 72 hours, he interrogates a mutilated English pilot, gets another one killed in France and then travels there himself (battling stupid French police and American cigarette-stealing German soldiers).

In the end, one wonders if it was all worth it. Not his efforts to prove Marianne’s innocence, but this entire movie project. Based on a script by Steven Knight (“Burnt”), the story stops, starts, meanders and finally comes to a predictable conclusion. Zemeckis, in addition to his previously mentioned flaws here, seems to throw any evidence of pacing and timing to the wind.

The biggest sin, though, is the complete lack of chemistry between the leads. Sure, they kiss and have sex (over and over again, it seems) and say they love one another, but you never really believe it. Pitt, who usually thrives whenever he gets to kill Nazis (see “Inglourious Basterds” and “Fury”) is so low-key in Allied, the viewer is never motivated to care about his fate one way or another. The talented Cotillard exhibits a bit more passion and emotion as Marianne, but is continually stifled by the shortcomings of the script.

I do admit, however, that the period design is fairly accurate and Don Burgess’ cinematography is well done (his credits include “Forrest Gump,” “Cast Away,” “Spider-Man” and “The Book of Eli,” among others). And while the views of North Africa and London, as well as the close ups of Pitt and Cotillard, are crisp, clear and well-defined, the overall point of this picture is muddled and unsatisfactory. Not terrible, by any means, just not what it should be considering the pedigree of this director and especially this cast. 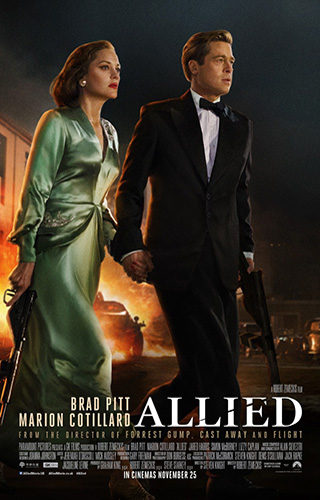