Looks can be deceiving. Whatever has your attention is usually caused by a sexy surface that absorbs your mind, body, and soul. For some viewers, that sexy surface is the charismatic presence of a blue-eyed, slick-haired Hollywood leading man. For me, it was the characteristics of what seemed to be a really good movie and in that process, I received a surprise recipe that didn’t sit well with my stomach.

Fresh off his persistent stride into critical acclaim for his performance in “American Sniper” (along with his recent box office misstep in “Aloha”), four-time Academy Award nominee Bradley Cooper returns with an ambitious aim — to bring the heat — which is perfect timing since his brand new film is entitled Burnt. Cooper confidently plays Adam Jones, a hot-shot bad boy chef with a dark past (that’s right, y’all, he’s been through stuff). Now on a mission to reinvent himself and his career, Jones recruits a diverse team of talented cooks with the sole goal of turning a dwindling London restaurant into a prestigious three star powerhouse of yum. At the helm of this pristine-looking picture is veteran TV writer, producer and director John Wells (“The West Wing” and “ER” TV series), who also brought us the star-studded film adaptation of the family melodrama “August: Osage County” in 2013.

Just as Meryl Streep delivered a tour de force performance as an unlikable matriarch, Bradley Cooper tries hard to channel his inner Gordon Ramsay while exposing another skill set: His actual fluency of the French language. And yes, it sounds pretty cool. From the beginning of the film, Jones’ backstory is revealed to us through his own voiceover and not visual imagery. This audio-centric style of storytelling breezes its way into the film’s inciting incident while leaving us with a mouthful of forgettable exposition. We are constantly forced to take everything about Jones at face value and it doesn’t help when almost every character is programmed with two goals: Making sure the audience knows that Adam Jones is a big freaking deal and why they want him dead. By verbalizing the mythos of Adam Jones and not spellbinding the viewer with his experiences, Cooper’s efforts become awkwardly hindered. He’s put in the tall-task of trying to make a one dimensional character viable.

Unfortunately, this is also a problem Burnt has with the rest of its talented cast, which includes Omar Sy (“The Intouchables”), Daniel Brühl (“Woman in Gold”), Matthew Rhys (“The Americans” TV series), and Emma Thompson (“Saving Mr. Banks”). Meanwhile, Jones’ initial foil, Helene — who is played by Sienna Miller (“Foxcatcher”) — makes a first impression as a feisty, independent chef and quickly melts into a clichéd, carbon copy of “Mary Jane Watson,” but last time I checked — this wasn’t “Spider-Man 5.” When a film can’t decide on what it truly wants to be, its lack of identity can become a frustrating cinematic experience. Burnt is part-character study, part-romantic comedy, and part-ensemble drama that headlines itself as a labor of love. It embodies all of these genre elements when it should have focused on just one. Despite that, the film manages to create a few explosive scenes and some crackling dialogue, but it doesn’t dismiss its other blaring issues. The story’s suspense is predicated on Jones’ demons resurfacing in a more destructive way. However, the film wastes its opportunities of drama and character building for outcomes that might bring a few laughs, but at the cost of a man who struggles in vain.

For a film that wants to toot the horn of unity over the dangers of singularity, its execution and exploration of that ideal stumbles greatly. After a hard day’s work, Jones’ team has a family dinner, which is supposed to express a deep community among the people he works with. Yet, it is through those tiny montage sequences that eventually nullify its heartwarming attempt. Outside of Helene, there is not another person in that kitchen who bonds with Jones in a genuine way. By thrusting us into the cut-throat world of a fancy restaurant business, the filmmakers inevitably create a tale that becomes too fast for its own good because like cooking, a lot of great work must be done in a short amount of time.

Nevertheless, the chefs from this kitchen have collected all of the ingredients to make a “good movie.” But in this case, you have a massive, undeniably delicious swirl of icing that, when you stick your fork in it, ready to devour its delight, you find that there’s no luscious cake beneath its perfectly fluffy surface. Satisfaction is the endgame of every bite and it is conspicuously absent. It also reminds me of a scene where Jones says to Helene that he doesn’t just want to make good food, but food that will make people stop eating. As pretentious as that confession sounds out of context, I found those words to be an honest revelation of that chef’s heart. It’s too bad the Burnt kitchen chefs don’t share the same conviction of its protagonist. Instead, it settles for trying to wine and dine us with a dish that clearly isn’t worthy of being three stars. 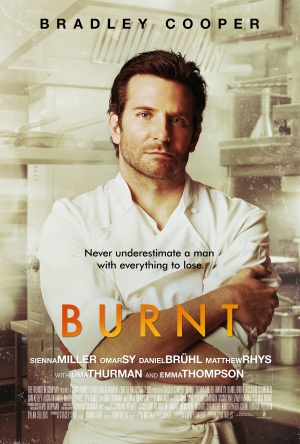