During World War II, the Nazis plundered an estimated 750,000 artworks from European countries including priceless paintings by Van Gogh, Degas, Vermeer, and Michelangelo. Though many paintings and other significant cultural artifacts were recovered by the “Monuments Men,” many were destroyed or auctioned off at extremely low prices. Today, there are well over 100,000 items that have not been returned to their rightful owners. In Woman in Gold, British director Simon Curtis (“My Week With Marilyn”) explores the fate of one of the paintings, the Portrait of Adele Bloch-Bauer I by Austrian symbolist painter Gustav Klimt, which was seized by the Nazis from its owner, Ferdinand Bloch-Bauer.

The painting, an oil and gold on canvas, ended up in Vienna’s Belvedere Palace and became a popular tourist attraction, referred to as Austria’s “Mona Lisa.” Sadly, its original title denoting its Jewish heritage was replaced with the generic “Woman in Gold.” Based on a true story, the film depicts the seven-year legal fight of Adele Bloch-Bauer’s niece, Maria Altmann (Helen Mirren, “Hitchcock”), a Jewish refugee and Los Angeles shop keeper, to reclaim her family’s collection of Klimt paintings from the Austrian government. To assist her in her fight, Maria is helped by a friend’s son, Randol Schoenberg (a bland and miscast Ryan Reynolds, “The Captive”), grandson of composer Arnold Schoenberg.

Schoenberg has just started working for a big law firm and has no experience in the world of art collection, but Maria is confident in his ability to persuade the Austrian authorities to return the painting, whose worth was estimated at $135 million dollars. After overcoming her reluctance to return to the country in which her family perished, Maria and her young attorney (with apologizes to his pregnant wife, Pam (Katie Holmes, “The Giver”), travel to Vienna where flashbacks to Maria’s life as a little girl (Tatiana Maslany, “The Vow”) in a comfortable middle-class home provide a background for the painting’s creation.

Distressing scenes of the Anschluss in Austria in 1938 are shown where Nazi soldiers are greeted by cheering crowds and Maria witnesses the humiliation of Jews forced to clean sidewalks and have their facial hair removed. In a tense sequence, Maria and her husband Fritz’s (Max Irons, “The Host”) narrowly escape pursuing German officers in their attempt to leave Austria and fly to Cologne, then to London. Back in present time, Maria and Randol are assisted by Austrian investigative journalist Hubertus Czernin (Daniel Brühl, “A Most Wanted Man”), as they try to convince a newly formed committee on art reclamation that the stolen Klimt paintings are rightfully and legally hers.

In her will, Adele, who died at an early age, asked her husband to leave the paintings to the Austrian State Gallery upon her death, but whether or not this is legally binding is a key subject in the case. Eventually the case will end up in the U.S. Supreme Court in a rare instance of a U.S. citizen suing a foreign government. Woman in Gold tackles a great many weighty themes such as Austria’s unwillingness to confront their World War II collaboration with the Nazis and the lurking rise of anti-Semitism in Europe, shown in a confrontation with a passerby who tells them that “Not everything is about the Holocaust.”

Unfortunately, however, the film takes on too much and lacks a clear focus. Characters are presented in broad strokes that fail to do justice to their humanity, depicting them more as symbols for a cause than as real human beings. Though Schoenberg discovers a connection with his grandfather, the famed twelve-tone composer that he never knew, the matter is barely touched on. Woman in Gold is to be commended for its attempt to increase awareness of a little known aspect of the Nazi atrocity, yet with its tepid direction and over reliance on sentimentality and clichés, it fails to truly stir any deep emotions. 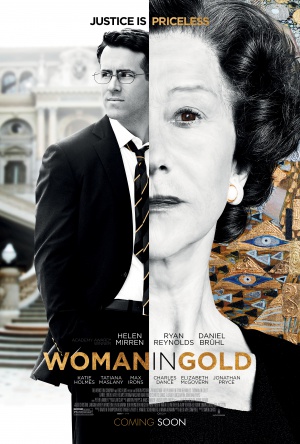