Wolfy: The Incredible Secret is a family film that tries to straddle the divide between entertaining younger viewers and not boring parents to tears. The best family films are those that succeed in this straddling act while those that fall into the gap can fail to impress anyone. Wolfy: The Incredible Secret mostly succeeds in its endeavor aside from a few wobbles. For younger viewers, there are endearing and amusing characters that get caught up in some wacky escapades. For older viewers, there are themes of governance and social stratification, as well as some interesting takes on anthropomorphism.

The eponymous Wolfy is something of a wide-eyed innocent, metaphorically a rabbit-in-headlights despite his insistence (and biological reality) that he is a wolf. This is perhaps ironic since his adoptive family, principally his “brother” Tom, are actually rabbits, and issues around Wolfy’s carnivorous nature become more prominent as the film progresses. Wolfy and Tom are an amusing double act, recalling other animated duos such as Mike and Sully from “Monsters, Inc.” and Jiminy Cricket from “Pinocchio.” Tom provides the voice of reason and barely-contained frustration at Wolfy’s naïve blundering, the social segregation of Wolfenberg serving as a major source of Tom’s outrage. This content may pass over the heads of younger viewers, but adults can appreciate the portrayal of a society that rewards some while intentionally disadvantaging others.

Other characters in the film fare less well, mainly due to not receiving enough screen time. The principal antagonist Lou-Andréa, ironically, lacks teeth and therefore the sort of boo-hiss evilness that makes villains such as Cruella De Vil from “101 Dalmatians” and Shere Khan from “The Jungle Book” so memorable. Similarly, Scarlett the fox-fatale is too flighty to provide a compelling love interest or a redemptive arc of sufficient weight. Other amusing figures such as Rosetta the pig and Simon-Edgar Finkel the hedgehog appear and disappear all too quickly, before we return to Wolfy and Tom getting into scrapes but never with much sense of danger or excitement.

What these scrapes do have, and where Wolfy: The Incredible Secret really delivers, is in terms of strangeness. Right from the opening scene things are rather peculiar, as the film seems less than content with a straightforward universe where animals fill human roles. Wolfy and Tom are fishing, like humans, but spied upon by a crow and manipulated by fish. Boars and bears serve (both narratively and within the film’s society) as beasts as burden, and one character shape shifts between different animals and even into a somewhat birdlike human (or human-esque bird, if you prefer). Although the city of Wolfenberg is governed by a wolf dynasty, therefore behaving like humans, the Meat-Eaters’ Festival features all manner of carnivores, including lions, tigers, cheetahs, crocodiles and seemingly humanoid snakes. Furthermore, at one point these carnivores unleash hounds to chase a rabbit, a peculiar set of double standards reminiscent of Mickey Mouse being friends with the canine Goofy while also having Pluto the pet dog. To cap it all, one speech even condemns crimes against humanity! While this line may make more sense in the film’s native French, in English it serves to maintain a sense that things here are a little off.

It is to the film’s credit that these inconsistencies add to the film’s charm rather than detract from it. Just as Wolfy becomes increasingly wide-eyed and Tom increasingly distressed, so does the viewer become ever more drawn into the weird and wacky world of the film. The revelations, when they come, are not so much surprising as mind-boggling, especially the timely interventions of tickling and vicious plants (seriously). Echoes of Princess Mononoke and various woodland-based Disney features such as Bambi and The Fox and the Hound feel like pleasant homages rather than shameless rip-offs, which help to create a sense of familiarity and shared understanding between film and viewer. Once again, this provides something for older viewers, who can recognize and engage with the film’s referencing of animation’s varied backlog.

It is unfortunate therefore that the weakest element of Grégoire Solotareff and Éric Omond’s film is the animation itself, which is functional at best. The characters’ movements are rather jerky and the backgrounds static, the overall aesthetic lacking both the vibrancy of Pixar and Disney and the loving detail of Studio Ghibli. Nonetheless, there are some nice touches within the artwork, such as the town of Wolfenberg atop a hill that is shaped like a wolf’ head. Features like this highlight the film’s charm, which is its greatest strength. Wolfy: The Incredible Secret may not be earth-shaking, but it is a charming way to spend eighty-odd minutes. 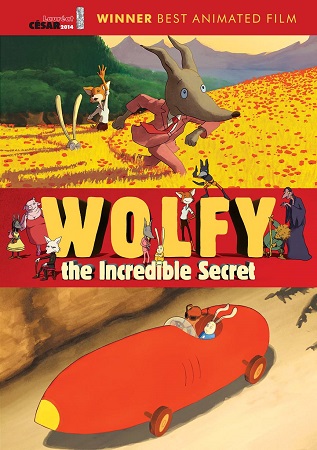