Though Gandhi said, “An eye for an eye will make the whole world blind,” many of us deal with the frustrations of modern life by striking out against a society we see as oppressive. We rail against the politicians who misgovern us, the bureaucrats we tangle with, or simply against a world that does not always support our desires. Most express their anger in socially acceptable ways, others do not. It is the others that are the subject of Argentine director Damián Szifrón’s (“On Probation”) Wild Tales, six unrelated stories filled with dark humor, stylized violence, unhinged emotions, and unexpected twists in the “Twilight Zone” tradition, tales that reflect the insanity of contemporary existence.

Produced by Pedro Almodovar (“I’m Not Excited”) and nominated for an Oscar for Best Foreign Film, the assortment of characters that populate Wild Tales are not poster boys for forgiveness but are united in their desire for revenge against real or imagined enemies. Though in films of this genre, the expectation is that some segments will be better than others, here each twenty-minute segment is so impeccably written and compelling that they could each form the basis for a feature-length film. In “Pasternak,” the bizarre episode that opens the film, Isabel (Maria Marull, “Antes del estreno”), an attractive model, boards a plane for a business trip and strikes up a conversation with Salgado (Dario Grandinetti, “Inevitable”), a music critic, seated across the aisle. After she tells him about her ex-boyfriend Gabriel Pasternak, he tells her that he also knows him as an aspiring classical music composer.

Salgado relates how he emphatically rejected one of his compositions, though he recognizes his words may have hurt. Other passengers overhear the conversation and stand up to claim that they also know Pasternak and have mistreated him in one way or another. The sequence ends on a note that is so delightfully macabre that it cannot and should not be described but must be seen. In “The Rats,” the film’s second vignette, a waitress (Julieta Zylberberg, “Extraños en la noche”) in a restaurant encounters a nasty customer (Cesar Bordon, “History of Fear”) whom she recognizes as the loan shark who was responsible for her father’s suicide.

She would like him to suffer but is unwilling to do anything about it until her determined cook (Rita Cortese, “Verdades, Verdaderes, la vida de Estala”), speaking from experience, tells the waitress that prison is not so bad after all and decides to take matters into her own hand. Revenge escalates in “Road to Hell,” a road-rage segment reminiscent of Steven Spielberg’s “Duel.” A well-to-do man (Leonardo Sbaraglia, “Aire libre”), driving an upscale Audi sports car on a lonely stretch of road, has some choice remarks for the driver (Walter Donado, “The Road to San Diego”) of a slow-moving pickup truck who refuses to let him pass. Called a “redneck,” the fun starts when the businessman has a flat tire and the confrontation escalates in very imaginative and bloody ways.

Other stories deal with an engineer (Ricardo Darin, “Violet”) whose car is towed away once too often for his emotional well being, and a wealthy father (Oscar Martinez, “Empty Nest”) who tries to cover up for his teenaged son’s involvement in a fatal automobile accident with a scheme that involves payoffs to his lawyer, the family gardener, the prosecuting attorney and the police. The final segment, “Till Death Us Do Part,” is, both literally and figuratively, the icing on the cake. In the episode, a lavish wedding becomes sidetracked when the bride Romina (Erica Rivas, “Aire libre”) discovers that her new husband and Ariel (Diego Gentile, “The Hush”) had an affair with one of the wedding guests.

The wedding bouquet becomes a dart thrown in several directions as the celebration turns into a mixture of blood and wedding cake. The most commercially successful Argentine movie in history, Wild Tales is a wild ride that provides the viewer with a sense of how losing control may be cathartic and fun on a movie screen but counterproductive in our own life. As one of the characters in the film says, it may be better to just accept that bureaucracy will find a way to get most of your money no matter what and move on with your life, because in that way you’ll live longer than if you give the unfairness of the matter any prolonged thought. That is probably good advice, that is, unless you find the idea of revolution attractive. 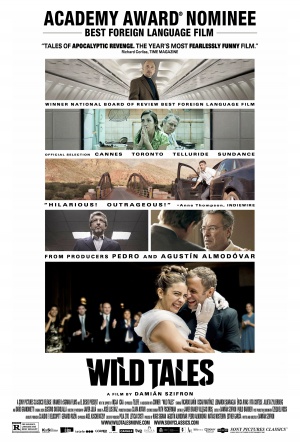