Indeed, Southbound is a collaborative effort in every sense of the word. Sure, all films that are made are collaborative productions. However, this horror anthology has a lot of moving parts with four co-directors overseeing five different stories carrying messages of mystique and moody overtones. The ambitious undertaking by the quartet of filmmakers in Roxanne Benjamin, David Bruckner, Patrick Horvath and Radio Silence (a group of individual artists working under one umbrella) is far more interesting as a gory gimmick than a solid horror showcase that is cohesive and penetrating in tension. Still, Southbound does deliver when raising signals of suspicion, atmospheric chills, head-scratching symbolism and a startling presence of isolation in the form of a stretched out highway presumably heading to the halls of hell.

For the most part, Southbound manages to adequately tie its revolving narratives into a decent whole without coming off as relentlessly choppy or non-descriptive. In others words, the film’s flow of story structure is not compromised too much so the morbid rhythm is not in danger of being tampered with erratically. Basically, anthologies — particularly in the horror genre — are tricky to construct because the overall theme of spooky anticipation should collide solidly and that is usually not the case in most instances. Nevertheless, Southbound works because its format seems to be right on the same page of expectation given the various squeamish visions of the contributing crew of handlers behind the camera.

Interestingly, the majority of directing heads involved in the film’s creative make-up are also the architects behind the “V/H/S” horror movie series. Understandably, the short-lived experimentation of the “V/H/S” cinema stamp wore out its so-called shock system effectiveness to the point of no return. The premise is rather conventional at best as Southbound flirts with the elements of weary and bloodied wanderers, an expansive American Southwestern corridor of endless dust-driven roads out in the middle of nowhere and the forced visitation of lingering sins, guilt and immense doubt. When Southbound systematically toys around with the psychological weariness of its tormented travelers much like a rattled kitten does to a ball of yarn then the movie maintains its dramatic legs rather pleasingly.

The penetrating playground for the staged proceedings in Southbound involves the aforementioned mysterious desert roads that sets the pace for the disillusionment of the movie’s roaming protagonists. Apparently the nameless dry terrain is the hellish backdrop for the band of perplexed folks as they contemplate over past sinful endeavors. The intent is for this bunch to either reach an understanding as to resolve any regrets they may be still harboring or tackle the shame behind that sinning deed. Naturally, the tedious travelling reinforces the unsettled psyche for this confused crew of petrified participants.

The first story (a segment entitled “The Way Out” by way of Radio Silence’s direction) begins with a tandem of disheveled law-breaking drifters named Mitch and Jack (Chad Villella, “V/H/S” and Matt Bettinelli-Olpin) arriving at a local truck stop while dripping with a horrible combination of blood and sweat. The squalor-induced duo accomplishes getting cleaned up a bit after their brief stop and departs on their merry way to the road heading south. Strangely, Mitch and Jack find themselves continually circling back to the remote truck stop from which they left. This is a head-scratching scenario as the truck stop appears to be drawing them back into its puzzling realm. Is this a bizarre kind of unlikely prison where the two fugitives are forced to being restricted in their movement? Also what about the sinister forces of death merchants that seems to be tracking the dogged pair?

Invariably, the dastardly bulk of twists and turns manifests at a motel where the interplay of doomed characterizations will tangle with further complications. Strung-out bandmates Sadie (Fabianne Therese, “John Dies at the End”), Kim (Nathalie Love, “Palo Alto”) and Ava (Hannah Marks, “The Runaways”) are prepared to leave the motel when a travelling setback dictates that they hitchhike to their destination. The hitchhikers are picked up by a peculiarly affable couple riding a luxury car in Raymond and Betty (Davey Johnson and Susan Burke). It is suggested that the all-women rock band spend the night with the couple’s friends (Dana Gould, “Tales of Halloween” and Anessa Ramsey, “Devil’s Knot”) at their house along with their creepy-minded twin teen boys that are up to no good whatsoever. Red flag warnings from indescribable and intolerable dinner meat servings to the incessant odd vibes in the ghoulish household smartens up at least one of the curvy rocker chicks that has the common sense to sniff out danger and retreat. This particular stimulating segment is under Benjamin’s directorial efforts.

In writer-director Bruckner’s “Accident” segment, distracted motorist Lucas (Mather Zickel, “I Love You, Man”) runs into an accident involving the female rocker that left behind the eerie occurrences back at the hellish household. Now the moral dilemma presents itself to Lucas: Should he stay and try to resolve the driving damage he has clumsily created or immediately split the scene and avoid further scrutiny? Well, Lucas does transport the woman’s desperately limp body to an empty hospital in a deserted town after experiencing blood gurgles within his throat (a perfect motivator to tap into his sudden consciousness, huh?). Only an unseen doctor on a phone call reciting medical instructions stands in the way as to whether the severely wounded woman will live or die by Lucas’s nervous hands.

Horvath’s directed fourth entry (penned by Dallas Hallam and Horvath) takes place at a local bar where the frazzled Danny (David Yow, “Moments the Go”) holds the patrons at gunpoint as he hastily questions the crowd about the whereabouts of his missing sister Jessie (Tipper Newton, “The ABCs of Death”). Among the bar dwellers that holds some key of suspicion to Jessie’s unknown location is tattooed bartender Al (Matt Peters from Netflix’s “Orange is the New Black” series). The tension is pretty much a pedestrian presentation in this installment that pales in comparison to the remaining stories of weirdness.

The fifth frenzied fable is Radio Silence’s “The Way In” (their companion piece to the aforementioned “The Way Out”) involves a home invasion where silenced menacing masked intruders threaten college-bound Jem (Hassie Harrison, “Dementia”) and her parents (Gerald Downey and Kate Beahan, “Flightplan”) with the emphasis on Daddy Dearest being the main reason for the home-invading hoodlum’s unwelcoming visit.

There are stretches of unevenness to the revolving narratives in Southbound and the challenge to connect the intertwined intrigue from each separate passage is not always a smooth process. Nevertheless, the segments that do hold their own compensate for the lesser impacted ones that register less than favorably. Still, Southbound is compelling enough to pull off its psychological horror sideshow with convincing bits of suggestive insanity. The current crop of contemporary horror vehicles offer the same kind of recycled macabre mechanics, but this low-budgeted project is quite ambitious and devilish in large part to the varying cooks flavoring their screwy stew with tawdry ingredients of bewilderment. 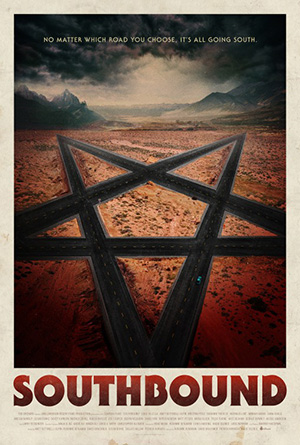