Have you ever hailed someone? You know, much more than just greeting, rather saluting in a profound, almost belittling veneration signaling an orderly obedience. Neither have I. I’ve been close, though. I’m too much of a fetishist to resist the temptation every now and then. My kind of people are artists and thinkers, preferably dead — so my “hail” is addressed to someone at the outer space or inner earth or wherever dead people, dead souls decide to go. Yet I’m aware this is just one step away from hailing celebrities, which are the kind of figures that elicit the most hailing nowadays, as well as their precursors, the Hollywood stars who starred that period between the time in which they were invented to the point at which they descended just to be better people than the rest — whence the name celebrity — and who deservedly baptized said period with the epithet for which we know it now: The star system. It was, after all, a system: Just like any other ideology arises and succeeds, and this was one for the taking.

The Coen Brothers (check the capitalization of the second word here) are one of those someones who take me right at the brink of hailing. So many times have I caught myself with my left arm right on its way up while fully stretched, straight and stiff, close to hailing them at the credits of one of their several masterworks and gems — the most recent one being their beautiful revamp of “True Grit.” Jeff Bridges definitely made for a better John Wayne . . . at least in my mind, as the prototypical hero always smelled too much like white supremacist politics. Their most recent venture, though, Hail, Caesar!, left my arm at rest even though it saw them revisiting their favorite period in history: The Golden Age of Hollywood which is the prologue and beginning of their lives in this world.

Born in 1954 (Joel) and 1957 (Ethan), the Brothers seem to think about the moment of their births as coinciding with the climatic era of their almost divinely appointed medium: Cinema. Hail, Caesar!, nonetheless, also locates them at their favorite place: The studios. This is the moment when the star system was at its highest and yet, paradoxically, the very moment in which the studio system (the 9th circle from which all the other systems were begotten) was challenged, and slowly losing power, by another emerging technology: Television — the oracle of dreams already available at the end of one’s couch. There was another element as to the studio system’s loss of steam (besides the undeniable slowdown supposed by WWII), and that was the witch hunt against communists that destroyed the careers (and lives) of many of the best crafters the studios had, i.e., of many of their best writers. But that’s another movie. And in that one, “Trumbo” finds his way back. In this one, though, the writers are laughed at just as much as the rest of the bunch.

The Coens take a closer look at the factory of dreams which was exactly that, a cold, cunning factory, by looking closely at one of its most important managerial positions: The opaque figure of the Hollywood “fixer.” In this way, we take a deep, long look at the office bureaucrat of the factory rather than at its products. We look at the dream behind the scenes, at the assembly line wherein collective dreams are manufactured as the populace’s main means of escape. The escapist ploy that Hollywood sold came with the fiction that extended beyond what the screen showed: The fiction that dictated the factory was a magical place, an earthly Olympus where common folks became gods or, better still, a Parnassus where these folks awaited in the foyer of the heavens before they were inducted to the boudoir of the stars. Before becoming one.

So it was all a matter of prestige, of perception on the eye of the beholders looking from the bottom of the mountain. All stars were so because they were perceived as such, and so their lives were supposed to be directive beacons through the darkness, the dullness, the dreariness with which these people lived their lives. A movie could only be a true vehicle to escape if the people inside were as worthy of admiration as the characters they played.

Eddie Mannix’s job (Josh Brolin, “Everest”) is precisely that. As any person in a managerial position, he’s the less passionate believer and yet the most fervent defendant of the creed he’s in. Thus being a fervent Catholic does serve his vocation well. We meet him at the confessionary, tritely venting, after about 22 hours, 34 minutes and 56 seconds (sorry, I didn’t memorize the exact time he quotes), that he has lied . . . to his wife. The fact, however, is that the small lie to his wife is near to nothing when it’s put into perspective with what is his life. He is the responsible of keeping the lie alive, Hollywood’s lie, his studio’s in particular: Capitol’s lie. And this lie relies on the fact that all its stars are perfect, exemplary, talented and, all in all, totally deserving of their place in the silver constellation of the most massive medium ever invented (of course, before television and, to be sure, way before the Internet).

Wearing the eternal frown we have gotten accustomed to see in Brolin’s face (this time, however, it seems quite justifiable — particularly when one compares him to his real-life template Mannix), Eddie goes around solving problems and making decisions during the little more than a day in which Hail, Caesar! takes place. Facing his greatest challenge to date, we see him solving problems (an Esther Williams-like starlet with an out-of-wedlock pregnancy [a funny and crass Scarlett Johansson, “Lucy”]; a talentless actor but agile cowboy who’s reluctantly moved to star in a classy drama [an amazing Alden Ehrenreich, “Beautiful Creatures”]; etc., etc.) while trying to find his greatest star starring (and almost completing) what is their projected hit for the season, the eponymous epic telling of “the life of the Christ” from the perspective of a Roman general. The star, Baird Whitlock (George Clooney, “Tomorrowland”), has been abducted by a couple of extras who take them with their true captors, a group of communist writers (led by the epically inconsistent communist philosopher Herbert Marcuse) that call itself “The Future.” Now it is up to Mannix to find his star in time to stop the gossip (from the rival twin columnists Thora and Thessaly Thacker [the thrilling Tilda Swinton, “Snowpiercer”]) and in time for him to deliver the speech that will provide the film with enough star-power to make believers out of its audience.

Since I am already taking too long with this review, I will not examine the categories in which, for me, the Coen Brothers’ films fall. I will say, though, that Hail, Caesar! is no masterwork. Rather, it is one of the light diversions with which the Brothers indulge themselves in-between their unique tragedies of dark humor. Also, this marks the third (and thankfully last, and thankfully best) installment in their “Numbskull Trilogy,” with Clooney as their favorite (and aptly so) numbskull. After “O Brother, Where Art Thou?” (perhaps the worst of the three) and “Intolerable Cruelty” (likely the lightest), and taking out the hilarious “Burn After Reading” in which Clooney doesn’t really star but is more a small part of a whole ensemble, comes Hail, Caesar! as a tribute and a satire of times past — both a nostalgic and corrosive look at the films of their past.

But, like with “The Hudsucker Proxy”, we get an omniscient and omnipresent voiceover as a celestial MC to tell us the tale of a common man. And, like with its predecessor, this voice comes more like a lazy lasso to keep the structure together than like the narrative resource it purportedly is. By the end of the movie, it is hard to care about either for the voice or for the character it presents. Other than this voice, nevertheless, the Coens’ trademark is there in full force: The common folk facing extraordinary circumstances.

Possibly, it is what lies within this trademark what fascinates the Brothers so much about the heyday of the star system: How common they really were and how they were fabricated to seem larger than life. The element of politics shouldn’t be overlooked either. The way in which they satirically sift what more recently became the writer’s strike into their movie illustrates how those other figures, working in the dark (the technicians, the managers, and, of course, the writers), contributed to the appeal we felt (and feel) for the prototypical Hollywood star. This make-believe world that so much fascinates them bears as well a close proximity to the parallel universe of fascism, in which the political or military leaders are usually the self-appointed stars in a make-believe place they call their nation. And Mannix is this system’s strong hand, the guy who’s got to make sure that obedience and fiction will keep aligning in the eyes of both their employees and their audience. Mix this with the other satirically sifted element of religion (in the movie-within-the-movie) and you’ve gotten a grand-ideological cocktail, the kind you have at the wrap-up party of your latest discovered constellation.

“Divine presence to be shot” reads an intertitle at the middle of a series of dailies we see Mannix watching at the beginning on the film. This title summarizes the cocktail mentioned just a paragraph ago. When the divine faith is translated to people and people replace any godly presence (unnameable as it is for Judaism, as the Coens very well know) you typically get a shot God and a fascistic (at first fascinating) figure.

All this and more is to be found in Hail, Caesar!, yet, as probably happens with this review, the movie’s intricate subplots never really jell and they end up cutting up the rhythm of a character we never really get to know enough to care about. Like the God the Brothers likely envision, we only see a mannish manager effectively solving situations, like what if Yahweh was nothing but a high-performing bureaucrat. Fire! 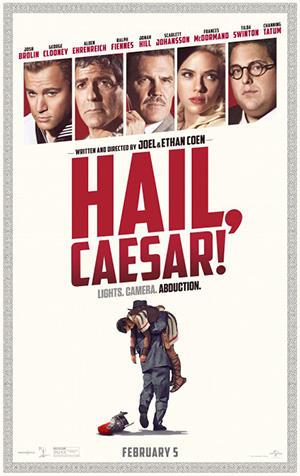