Many critics are calling Everest absolutely beautiful, but without the human emotion necessary to make it a truly great adventure movie. I take some exception to that, though, as I saw much emotional impact, but with the actors wearing googles, oxygen masks and heavy clothing, it was often difficult to distinguish one from the other and only at the conclusion do we actually know who was who. Still, that does not detract from the power of the true story of a group of climbers who are led to the summit of the world’s most daunting mountain by dedicated guides and sherpas in 1996, only to falter on the way back down.

The film is based on writer Jon Krakauer’s Into Thin Air: A Personal Account of the Mt. Everest Disaster, but opts to make Krakauer (Michael Kelly, “Man of Steel”) a very peripheral figure (his big scene is when he queries the group why they are there) while Rob Hall (Jason Clarke, “Dawn of the Planet of the Apes”), a Mt. Everest expedition group leader from New Zealand, becomes the center of the picture. Up to that time, he has led dozens of commercial climbs, but still feels concern about how crowded Everest is getting.

Everyone is. During the short window where weather is optimum and the climbing is relatively easy (if trudging more than 30,000 feet up the side of a snow-covered granite monstrosity can be called such a word), often dozens upon dozens of would-be adventurers pay extortionate amounts of money to risk life and limb. Why? Well, as the famous clichéd answer says, “Because it’s there.” Here the guide group, Adventure Consultants, takes almost six weeks to acclimate the armchair Mountaineers (although some do have extensive experience) in preparation for the dangerous journey.

Meanwhile, As Rob works hard to ensure that all of the climbers under his supervision are properly prepared, his competing group leader, the hippy-dippy Scott Fischer (Jake Gyllenhaal, “Southpaw”), dismisses Rob’s style as “hand-holding.” He even says, “If these people can’t make the Summit on their own, they don’t deserve to be on the mountain.” In a way, he is right, but he continues to lead unqualified people as close as he can to the top.

As in any film of this ilk, we are introduced to distinctive individuals, all of whom have different reasons for taking the challenge. Doug Hansen (John Hawkes, “The Sessions,” who looks more like Adrien Brody than Adrien Brody) is hoping to inspire his children as well as a group of young students who helped him pay for the trip. Beck Weathers (Josh Brolin, “No Country for Old Men”) climbs mountains as a means of fighting his depression. Yasuko Namba (Naoko Mori, “Absolutely Fabulous” TV series) has climbed six of the world’s seven tallest peaks, and is now aiming to complete her quest.

The ascent seems rather docile as most in the group make it to the Summit, while a few others falter and are forced to turn back. The timeline has to be precise in order to come back down before nightfall. A series of unfortunate events (no new ropes in a very strategic location, a tardy climber insists on making it all the way, etc.), however, and a freak deadly storm conspire to wipe out as many people as possible. I suppose most of the fun lies in predicting who will not return (I found myself guessing correctly about 50 percent of the time).

Burdened with heavy clothing and not too intriguing of a script, most of the actors take a backseat to the cinematography and Everest compensates by concentrating on the beauty and ultimate cruelty of the mountain. The amazing sights and ethereal vistas provide the uninitiated with just a small reason why so many would take the plunge (literally on many occasions). Director Baltasar Kormákur (“Contraband”) has invested blood, sweat and tears (as well as cinematographer Salvatore Totino, “Angels & Demons,” “Frost/Nixon,” “Cinderella Man”) to make this as matter-of-fact as possible. For instance, when characters begin to lose their lives, the deaths aren’t violent. They simply pass out, freeze or fall of a ledge. Plus, with everyone struggling to descend before they become victims themselves, there is little time to weep or grieve. Life may not be cheap up here, but it certainly isn’t very expensive.

Not much motivation on why these people are doing this, however, and that is one aspect which could have been explored a bit more. Also, the juxtaposition of those in peril on the mountain is mollified by scenes with the helpless women (including Robin Wright, “A Most Wanted Man” and Academy Award nominee, Keira Knightley, “The Imitation Game”) in their lives and there is a certain predictability now and then, but so much of it works because Kormákur shot a great deal of the movie on location in Nepal (while locations in Iceland and Italy were also used). And though there are certainly plenty of shots that emphasize the natural beauty of Everest, there’s far more visual emphasis on the countless dangers the mountain poses: Such as the deadly ledges, slippery slopes, bottomless crevasses (often only accessible with flimsy aluminum ladders) and walls of ice and snow that threaten to crumble and overwhelm at any moment.

With all of the emphasis on location, though, a few of the actors do stand out, especially the cocky Texan Beck, who is seen sporting a (Bob) Dole/(Jack) Kemp (the GOP ticket from 1996) shirt in the movie’s beginning. When he realizes he may not be as strong as he thinks, we see the bravado melt off into a very palatable vulnerability. This scribbler may be in the critical minority, but I was on the edge of my seat during most of this (with the exception of some slowness in the middle) and recommend Everest as one of the more effecting productions of the year. 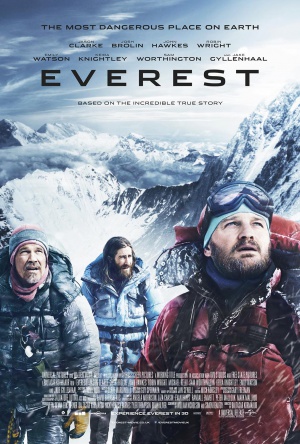