Imagine a world where demons share human cities. We never see them, but they see us, surround us, interact with us and depend upon us, while all the time hating us and viewing us with contempt. Such is the premise of Fire City: End of Days, the feature debut from Tom Woodruff Jr. It is a supernatural thriller that makes effective use of low key locations and impressive make-up, to create a film that plays like a feature-length spinoff from Joss Whedon and David Greenwalt’s TV series “Angel,” where demons and humans live alongside each other with only one side knowing the full story.

Woodruff previously directed a short, “Fire City: King of Miseries,” which shares the premise of his feature. Most of his career, however, has been as a special effects technician on such diverse offerings as “Skyline,” “Alien Nation,” and “The Terminator.” Much like these earlier efforts, his feature is set in Los Angeles, appearing in long shot as a city very much of fire, shimmering in the sun with burnished cinematography from director of photography, Danny Grunes. Yet the true fire of the title is internal, and the majority of the action takes place in an apartment building where demons remain indoors. Grunes largely opts for shadow in these locations, heightening the sense of that which lurks just out of sight. Production design team Dayne Oshiro and Katie Shipley create various dingy and plausible sets, reminiscent of “Angel” as well as “The X-Files.” This combination of recognizable and believable locations along with evocative cinematography ensures that the onscreen world is coherent and consistent, forming a strong foundation for a story in which nothing is what it seems.

You might expect demons to lurk in the shadowy corridors depicted here, but the humans in the film see the demons as being like themselves. Not that there is any shortage of human horror, as established in the opening scene. Andre (Derrick L. McMillon, “Life of a King”) seeks to satisfy his sexual lust with the teenaged Sara (Keely Aloña), since Sara’s mother is in a drug-induced stupor. The film’s protagonist Atum Vine (Tobias Jelinek, “The Possession of Michael King”) intervenes, but only because he does not want attention that might upset the status quo. This status quo is one of misery: Child molesters, junkies, drunkards and abusive couples share this building with the demons, who feed off the misery of those around them. Frank (Harry Shum Jr., “Step Up 2: The Streets”) regularly beats his girlfriend Lisa (Jen Oda); Cornelia (Danielle Chuchran, “Haunt” and Mary-Margaret Humes, “The Portal” as respective demon/human forms) offers fortune telling to wayward souls both human and demon. Vine is an unofficial enforcer who also deals drugs, maintaining the status quo to benefit the demons. The humans know one face and the demons another, yet he is the one who straddles the divide, monitoring both sides of the situation and, as the film develops, it is Vine who investigates disruption to the status quo and finds the position of himself and his fellow demons compromised. What follows is a story of crumbling alliances, occasional gory violence and redemption that is surprising despite being conventional. The viewer might expect to be allied with the human characters and condemn the demons that care only for themselves, but such is the characterization that you feel yourself drawn to the weird cavalcade of fantastical people.

A key strength in the film is its presentation of the demons as people rather than monsters, with their own ambitions, hopes and fears, fears which become increasingly pronounced as events spiral out of their control. This presentation is achieved by the characterization of Michael Hayes and Brian Lubocki’s script, as the demons talk and behave like humans rather than with grandiose, archaic language and gestures (apart from Cornelia, whose connection to mystical forces makes her slightly different). Furthermore, the actors largely avoid histrionics, playing their characters more like low level criminals than beings of myth and legend. Nor is there much in the way of magic — fights are physical, the most powerful weapon is Vine’s gun and the demons use computers, televisions and cell phones. The performances are functional but not outstanding, although Aloña is especially affecting as Sara, the symbol of innocence and hope, but also danger, throughout the film.

The film’s strongest element in creating its plausible world is the make-up, as the demons (mainly Vine) regularly move between human and demon form, but simply through editing rather than with morphing effects. Moving through shadow, what appears to be hair in one shot has changed to horns in the next, creating a sense of the uncanny and slightly eerie. The more brutish of the demons have more animalistic or even horrific features, whereas Vine is reminiscent of pagan spirits such as Herne the Hunter which, while not exactly benevolent, are not savage. Furthermore, Vine’s wings give him the suggestion of being a dark angel. Much like David Boreanaz’s Angel, Vine is the film’s moral center, his steady awakening providing the viewer with an emotional throughline despite his sometimes menacing appearance. Demon prostitute Amber (Kimberly Leemans, “The Squeeze”) may remove all her clothes, but it is Vine who truly appears naked, confronted with revelations about himself and his place in the world.

Ultimately, however, Fire City: End of Days is a slight film, an intriguing idea that only partially sustains a narrative feature. Much is suggested but little explored, and the notion of a human-demon balance is not fully explained. The overall arc is rather predictable and does, unfortunately, collapse into cliché at its climax. But for a low-key supernatural effort it shows much promise, and it will be interesting to see what Woodruff does next. 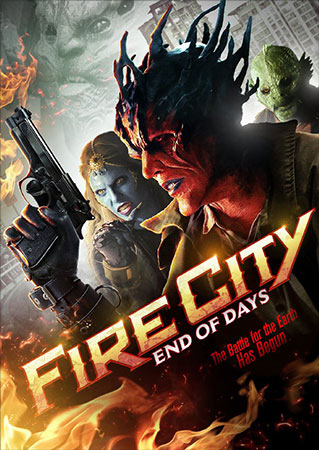