The topic of “Papa Was A Rolling Stone” is more than a classic tune from the legendary Motown musical act The Temptations — it also happens to be the breezy theme behind the clunky comedy, Father Figures. The “who’s your daddy” premise is a woefully tired one, but it did not prevent director Lawrence Sher (“The Hangover” cinematographer making his directorial debut) from conjuring up this flaccid familial farce drenched in awkward, raunchy high jinks with a side order of transparent sentimentality. Despite the noteworthy names attached to this toothless tease, Sher and screenwriter Justin Malen (“Office Christmas Party”) patch together a piffle of a movie project that has all the inspired appeal of a repetitive “Maury Povich Show” paternity test segment.

Unevenly, Father Figures tries hard to wear many wacky hats in its anemic quest for comedy gold, but convincingly misses the mark. Whether straining for lazy laughs as a gross-out comedy or attempting an off-kilter case of brotherly love/male bonding, it showcases the shoddiness and stale follow-the-dots antics of a lethargic laugher going through its workmanlike motions. Keen eyed viewers may compare the frivolously flat and fruitless Father Figures to the 1996 vehicle “Flirting With Disaster” which sports the same kind of road trip/hunting for daddy foundation, however, the main difference is that “Flirting With Disaster” used its star-studded cast to their utmost and is actually funny. Apparently random and garish foolishness involving urination, poking fun at prostates, titanic cat testicles and incest-related jocularity isn’t as uproarious as Sher and Malen thought them to be.

Twin brothers Peter (Ed Helms, “Vacation”) and Kyle Reynolds (Owen Wilson, “Masterminds”) get a shock to the system upon learning that their natural father is not dead as originally believed, just as their mother Helen (Glenn Close, “Guardians of the Galaxy”) gets hitched to new husband Gene (Harry Shearer, “Love & Taxes”). It turns out that the promiscuous Helen was something of a “carefree gal” back in the 70s as she made the rounds, so to speak. Thus, the conflicted siblings embark on a mission to discover the unknown man known as the Daddy Dearest. Naturally, this goofy process will lead Peter and Kyle on a tricky trail in search of their daddy’s true identity while facing their own bouts with self-discovery.

Of course the bickering brothers are polar opposites so there is bound to be the obligatory “Odd Couple”-esque situations that arise during the road trip. Helms’s Peter is the uptight divorced father of a teenage son (Zachary Haven, “Horror House”) showing major indifference towards him. Wilson’s Kyle lives a charmed life in paradise with a young, exotic and sexy partner Kaylani (Jessica Gomes, “Once Upon a Time in Venice”) at his side. Assuming that finding their father may bring some closure to their differences as well as strengthening their potential abilities as father figures themselves, it is imperative that the brothers survive each other’s annoyances. Conveniently, the Reynolds happen to stumble upon a hitchhiker (Katt Williams, “Scary Movie 5”) who ends up in the convoluted role of mediator for the incessant arguing.

Among the perceived sperm donors believed to have sired the brotherly duo is NFL Hall of Fame ex-Pittsburgh Steelers quarterback Terry Bradshaw (always a treasured tool in playing himself both on TV and film) as he and fellow retired footballer Rod Hamilton (Ving Rhames, “Mission: Impossible – Rogue Nation”) recall some of loosey-goosey Helen’s wild ways back in the day much to the chagrin of her embarrassed sons. After hearing that their mother was passed around more than a football in one of Bradshaw’s legendary Superbowl appearances the guys look up the likes of eccentric Roland Hunt (Oscar winner J.K. Simmons, “Whiplash”), a former party-hearty New York-based financier that enjoyed some scandalous good times with Helen during the hedonistic Studio 54 disco era. Unfortunately, Hunt has become a grumpy, gun-toting loner who nearly terminates the existences of Peter and Kyle with his off-color craziness.

Sadly, Father Figures drags its heels while stringing along the sluggish scenes that are meant for off-the-cuff hilarity only to clumsily come off as tepid anecdotes of banality. Mindless fodder involving Kyle urinating on a boy at a rest stop or the aforementioned Williams’s hitchhiker refereeing the brothers’ beef and previously mistaking him for a serial killer is utter nonsense to pad what is already a plodding mess of a chuckler. Sher’s comical pacing and handling of the meager material is relentlessly spotty. Whatever poignancy that Father Figures was trying to convey is frightfully mishandled.

Both Helms and Wilson are usually reliable in their now regularly scheduled trademarked characterizations. Curiously, Helms’s nerdy nuances (so brilliantly demonstrated in the underrated “Cedar Rapids” and “The Office” TV series) and Wilson’s sleepy-eyed surfer hipster persona (as seen in “Wedding Crashers” and “Zoolander 2”) are notoriously forced and ineffective in this faceless romp. Wilson’s numerous collaborations with either Vince Vaughn or Ben Stiller make for some easy laughs, but his teaming with Helms feels labored and lackluster with no sense of fluid spirit or rib-ticking revelation. Multi-time Academy Award nominated Close and Academy Award winners Simmons and Christopher Walken (Wilson’s “Wedding Crashers” co-star) are also needlessly wasted in this fatherly fact-finding tripe.

One thing is for certain, in the case of Father Figures, (parental) anonymity would have been best for everyone involved. 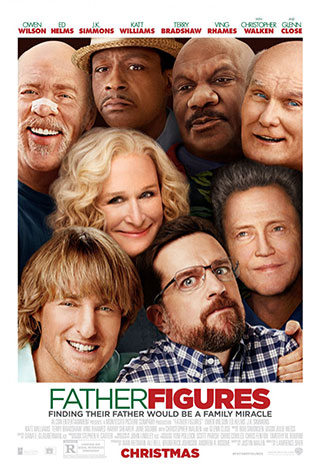