A few weeks ago, a friend returned from her annual trip to her family’s farm, about two hours outside of Sydney. When she returned home, I was shocked to hear how common it was for people to hunt and shoot kangaroos, supported by photos of them proudly holding the slain marsupials by their feet. Confused and outraged, I enquired as to why they could so easily take down our nation’s emblem — she responded, “They believe they’re pests.” Of course, this wasn’t the first time I had heard this reasoning.

Pest. How detrimental can a label be?

Kate McIntyre Clere and Michael McIntyre’s shocking and thoroughly researched documentary Kangaroo: A Love-Hate Story dissects the stigma of “pest” attached to Australia’s most iconic animal and how its ability to be divisive has impacted a nation and consequentially, the world. From the outback of Alice Springs to the streets of Sydney, the team behind this eye-opening exposé travel across the country to grasp every possible professional opinion on the issue. Zoologists and university professors, politicians and activists, farmers and hunters — all citizens of Australia — give their take on the kangaroo debacle.

The truth can be easily blurred from these numerous accounts as they are all conflicting, personal and impassioned. Farmers recount how their livestock and land are being destroyed by packs of kangaroos, now described as reaching “plague” like proportions. The indigenous perspective is also offered, that the kangaroo were in fact the first settlers on the land. Clere and McIntyre team up with Animal Justice Party leader Mark Pearson, as the pair travel to Russia and China to shed light on the horrific trade protocol the powerhouse countries are blind to. The intellectual standpoint from professors from the Universities of Sydney and Melbourne are researched and supported by statistics and historical reasoning; debating that the term “pest” is absolutely ridiculous and that the root of the label reaches back to British colonization over two hundred years ago.

However, British settlement cannot be at fault for the inherent disrespect for a native animal that is ironically perched on top of Canberra’s Parliament House, a shot shown many times throughout the documentary. The documentarians delve into the bloody abattoirs and cold offices where it is decided the icon is a “valuable resource” for primarily pet food and meat. They are essentially a product, an open market for trade and consumption for the masses, whether in supermarket aisles or being sold as leather gloves or soccer boots in California. The international ramifications that are exposed along with the almost corrupt inner workings of the government are frankly quite shocking — politicians were and still are ignoring dangerous health warnings regarding the treatment of the kangaroo meat all for the means of trade opportunities.

It’s all about the warped imagery. Pest or icon. The use of different recording mediums from those directly affected by the issue give Kangaroo: A Love-Hate Story a scarily immersive experience. Powerful aerial shots with the help from drones capture the kangaroo bounding through the flat, bare dessert landscape. In its purest form, a symbol of majesty and grace in this one moment, beautifully slowed down to really emphasize the marsupials’ unique physique and movement as it hops across the plain. A drone operator from the States is ecstatic with what he has just captured, high-fiving his colleague with sweat gathering around his arms.

On another property, a hand-held camera captures the kangaroo but in a harrowing, gruesome way. Now in New South Wales’ Blue Mountains, a property owner films the leftover carnage and slaughter of numerous kangaroos on his land which prohibits shooters from entering. They are not the majestic animals we were previously shown — they are now a part of a plague that has been eradicated and killed in the most inhumane ways. Imagery is a powerful tool and is something that cannot be separated from the kangaroo. It’s an image of Australia: Our sports teams, our airlines and the Olympic Games. A country built on contradictions adds another to its list by exploiting (and exporting) its supposedly beloved emblem.

Applause is in order for this real and honest documentary. Clere and McIntyre’s explosive exposure is armed with brutal facts and bizarre opinions that rightfully shine a light on the indecencies brought onto these animals. Why shy away from revealing the barbaric truth behind the treatment of kangaroos? Yes, this documentary is graphic, explicit and sickening to witness at times as the imagery is just as confronting as its matter and dumbfounded excuses. But what is more disturbing and equally confronting is how cavalier the government is in its involvement and prolific support for their national icon to be slain, plain and simple. Since settlement, the country I do call my home has a dark history of repression and denial — Kangaroo: A Love-Hate Story is just another example. 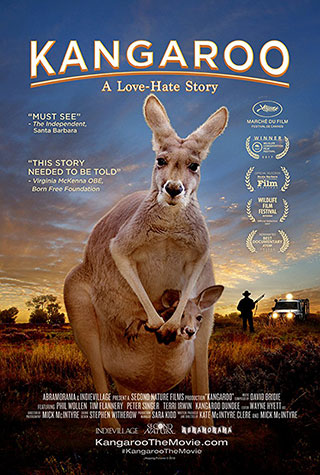