Here it is, Spider-Man 3, the most anticipated movie of the year. As a Spider-Man fan for most of my life, I can safely say I was counting down the days for this release. After “Spider-Man 2,” I found myself yearning for more. Could the third installment best the sequel which actually bested the original “Spider-Man?”

First let’s get the synopsis out of the way. Peter Parker (Tobey Maguire) is living the high life. He’s got his dream girl, Mary Jane Watson (Kirsten Dunst) and the public adores him. Yet, things unravel quickly — a meteor strike brings about a symbiotic being, which will be known as Venom after fusing to another host Eddie Brock (Topher Grace). This entity attempts to bond and take over Peter by bringing out his dark persona. There is also this little grudge being kept alive by Harry Osborne (James Franco), since he believes Spider-Man killed his father (Green Goblin). And to top it all off, enter the Sandman (Thomas Haden Church), a career criminal who falls into the path of Spider-Man when it is learned he was the gunman who killed his uncle Ben. All these villains and so little time! All Peter wants to do is settle down with the woman he loves . . .

So as I initially asked in the opening of this movie review, could Spider-Man 3 top its’ predecessors? Yes, it could have. However, as Uncle Ben told Peter, “With great power comes great responsibility.” So taking his words to heart it is my responsibility to inform you it doesn’t. Close, but no cigar.

Here is issue number one and it’s a big one. There is simply too many things going on, and not enough emphasis on any one thing that interested me (more on that remark later). I wasn’t sure if having three villains was to much to have and Spider-Man 3 proved it damn near is. The writers (Sam and Ivan Raimi and Alvin Sargent), tried to walk a very thin tightrope — providing some history of the Sandman and rehashing the new goblin’s (Hobgoblin?) background without detracting from the movie. All the while giving them and Venom equal screen time. It just didn’t work. I felt there wasn’t a need for the Flint Marko (Sandman) family scenes and watching him morph into Sandman wasn’t done to aid the story, it was done to showcase the computer-generated imagery (CGI). And Venom was a total loss. Venom is a badass motherfucker — probably one of the nastiest villains Spider-Man ever faced. Here we have no background on what it is (for the truth about it, see “Secret Wars”), and aside from the final battle there is little to no interaction.

As for emphasis, there is way too much of it when spotlighting the Mary Jane Watson – Peter Parker relationship. So much, I wanted to puke. I’m all for humanizing Spider-Man and making him more accessible, however, he comes off looking like a complete pussy. Time and again the director (Sam Raimi) has them sniffling and babbling about their love and blah blah blah And time after time, Mary Jane is spotlighted all on her lonesome. I don’t care that Mary Jane lost her gig on Broadway or that she is jealous about Gwen Stacy (Bryce Dallas Howard). This is an action movie about Spider-Man, right?

But here is what is good — this is a Spider-Man movie! There can be no question (at least in my mind), that Spider-Man is the most beloved comic book hero, even more so that Superman. Spider-Man 3 still showcases the wall crawler in a magnificent light. The CGI is superb once again. I was captivated by Spidey’s webslinging (I wish I could do it) and especially by the final showdown between him and the multitude of bad guys. It is clear the Spider-Man franchise is setting the bar awfully high for visual effects and it will be most difficult for movies to compare to it.

What I also enjoyed was watching the darker side of Peter Parker play out on the screen. In case you live under a rock, Peter Parker is one of the dorkiest guys around. No coordination, no luck with the ladies and no common sense skills to speak of. Yet when he becomes uninhibited (partnered with the symbion) he exudes confidence, insists on getting his way and even dances to impress. The scene of him moseying down Broadway is one for the ages! It was definitely good to see him get his just rewards after suffering so much humiliation.

So what’s next for Spider-Man? If there is indeed another movie in the franchise (rumor is there may be), things could still be bright. Even though Spider-Man 3 lost a considerable amount of steam, it should still be easy to reignite the engine. This certainly won’t stop anyone in 80% of the civilized world from seeing the movie. Spider-Man 3 is definitely an enjoyable flick to watch, especially if you have an IMAX theater nearby. It will still bring about feelings of exhilaration, just in much, much smaller doses (almost like watching one of the later installments of “Rocky”). 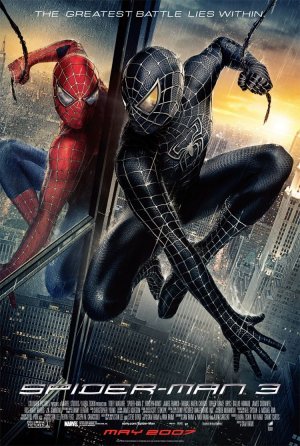