Jesus help me. I believe I may have just committed a cardinal sin — I watched another Jamie Kennedy movie. I would have thought I learned my lesson when I saw “Malibu’s Most Wanted,” Jamie Kennedy’s first foray into acting like a black guy (or a wigger to some). Shame on me though, because just as all guys, it takes me a few blunders to finally stop doing something I shouldn’t ever do. It’s one of the drawbacks to being a man.

But back to the horror I just witnessed. There aren’t many words that can faithfully describe just how bad Kickin’ It Old Skool is. So I’m not even going to run through a list of adjectives — you can do it yourself. What I am going to do is giving you the reasons it is as bad as it is. And that’s only because I like you so much. So here they are, in no particular order . . .

Damn near one of the dumbest premises around. Justin Schumacher (Jamie Kennedy) awakens from a 20-year coma and finds his mother (Debra Jo Rupp) and father (Christopher McDonald) in debt to their eyes (life support costs money). He thinks to reunite his break dancing team, the Funky Fresh Boyz, to win a dance-off competition and win a cool $100,000. Along the way of reorganizing the crew, he runs into his childhood flame and of course tries to reignite that fire. Betcha you can figure out the rest.

Mostly terrible casting. It was obvious the writers would cast Jamie Kennedy to act like an asshole and give white people everywhere a bad name. There are simply no other actors that desperate (unless you count Brian Austin Green of “90210” fame). The others should just be ashamed of themselves. Doing questionable acts for money makes one a whore and I’d hate to think of Debra Jo Rupp (masterful as Kitty in “That ’70s Show”) as a tramp. The only upsides to this bomb are Maria Menounos as Justin’s love interest, Jen and seeing David Hasselhoff and K.I.T.T. reunited again. This is only because Maria is a pleasure to gaze upon and Hasselhoff will always have a space reserved in my heart.

Stereotypes. 90% of the time I’m all for them. They’re easy to write into a movie and are usually good for a dozen laughs or so (just like fart jokes). But the gags in Kickin’ It Old Skool are unoriginal and fall flat. It’s real funny that the Chinese guy Aki, a.k.a. Cilly Chill (Bobby Lee), talks in a high pitched voice and throws out a “robster craws” for the audience. Hector, a.k.a. Popcorn (Aris Alvarado) is a big fat Mexican guy who can’t fit into his pants, puts on a bra to support his titties and of course loves tacos. Darnell, a.k.a. Prince D Rock (Miguel A. Núñez Jr.), is the black guy without a job (wants to invent stuff) and all the dance moves. Sad.

I could probably go on and on with all the things that make me want to gouge my eyes out with a toothpick. But for the sake of ending this movie review sometime today, I won’t. Just know that you run the risk of falling into a coma if you ultimately decide to see Kickin’ It Old Skool. This may or may not be a bad thing depending on your state of affairs. Lucky for me, I have a strong constitution and I can relieve stress by kicking the dog . . . 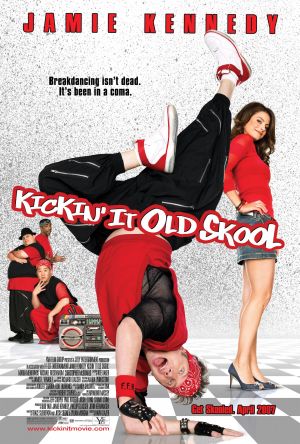