I’ve finally gotten around to watching the Reno 911!: Miami screener that’s been sitting on a bookshelf for the past couple of months. I’d been meaning to watch it for the longest time, yet time after time that little thing called responsibility kept creeping in. Screw the lawn. To hell with the job. I can now safely say that I’m quite happy that I finally sat down to view it. Especially, after the big let down that “Spider-Man 3” was, I needed myself a good belly laugh or two.

For those of you reading this review that don’t know (or perhaps you’ve forgotten), this movie is based upon the loony antics of a Comedy Central series aptly titled “Reno 911!.” In it, as in Reno 911!: Miami, the lives of 8 Reno sheriff’s officers are taped in a “Cops” like fashion. The inept officers are:

In general, the show is comprised of different segments spotlighting each of the deputies doing their duties. No real storyline or plot needed. In Reno 911!: Miami, these segments are now loosely tied to the fact that while at a police officer’s convention in Miami, a bio-attack instrumented by a some nefarious fellows is set off at the hall that all the police in the city just happen to be in. Naturally, the building is cordoned off and the only police not infected are of course Reno’s finest (turns out they weren’t invited to the convention). So the next few days they run loose throughout Miami Beach proving to all why all criminal activity should center in Nevada.

Even though the show works, there could be no doubt that spicing it up with handfuls of vulgarity, a pinch of violence and gobs of gratuitous nudity would make it work even better. I never laughed so hard as I did when the officers spend their first night at a fleabag motel. Each room is a story unto itself! And as a man, I was especially thankful for the all the screen time the Miami beaches were given. No, it isn’t because the water is so clean and the sands are so white. It’s because of the fantastic asses and tits that dot the landscape. If there is a heaven, I hope it is similar to Miami Beach (minus all the fags).

As with all comedies, hell, with all movies, some of the scenes and/or jokes fall flat. Paul Rudd’s character Ethan, didn’t need as much camera time as he was given. I found him rather annoying the second and third time around. The noise complaint at Suge Knight’s house could have been much funnier. Nonetheless, Reno 911!: Miami delivers on what it’s purpose was to do: Make You Laugh Out Loud. Chalk this movie up for a definite DVD rental or purchase. 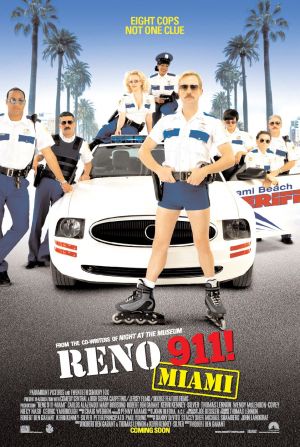