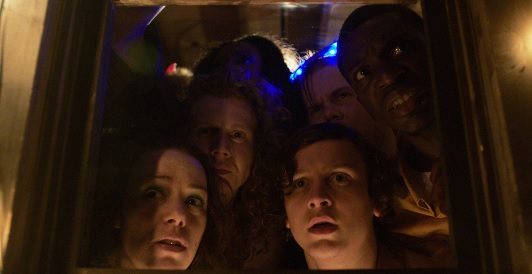 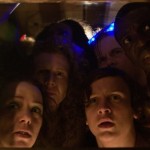 Don’t look too deeply for an explanation to Plus One, Dennis Iliadis’ foray into the science-fictioney thriller realm. You’ll hurt your brain if you do even worse than the dull, damaged brains of everyone starring in the movie.

When a meteorite hits the ground it couldn’t have come any sooner for David (Rhys Wakefield, “The Purge”). He’s royally screwed things up with his girlfriend of 730 days, Jill (Ashley Hinshaw, “Chronicle”), as something like kissing a girl who has just beat her in competition tends to do. Hoping to reconcile with her at a massive house party thrown by a super popular Indian dude and filled to the brim with good looking kids that only seem to exist in the movies, Jill dumps him with one of the more scathing teardowns I’ve heard in some time (and I’ve heard some).

Ah, but let’s get back to that meteorite. Its landing near a powerline has caused some sort of temporal shift that has created exact replicants of every party goer, the catch is they’re 15 minutes in the past. As previously mentioned, don’t ask the how, why or what of it, because Iliadis doesn’t want to get mired down in pesky things such as that. He wants to explore how his young leads react to the stressful situation more. David, as only a self-obsessed asshole can, sees there being a second Jill who hasn’t dumped him yet as an opportunity to rewrite the ass-rip he experienced earlier in the night. Best friend Teddy (Logan Miller, “The Bling Ring”) squanders the opportunity of a lifetime having hooked up with arguably the hottest girl at the party, Melanie (Natalie Hall, various rides on TV shows like “Pretty Little Liars”). Outcast Allison (Suzanne Dengel, “The Devil Wears Prada”), takes it all in stride choosing to explore herself.

The concept of Plus One does get more interesting, though, as each time the lights flicker out, the clones catch up in time, setting up for a climatic overlap. Or not so much. It takes a long time for anything of note to happen since, conveniently, the clones are always seemingly out of view from the throng no matter how close in time they become to them (the partiers are outside enjoying a stripper show, the dopplegangers are getting their drink on in the house; the dopplegangers are enjoying the stripper show, the partiers are now at the boathouse). And more so, why would anyone raise an alarm that aliens are quite possibly looking to take our Earthly place when there is an ex-girlfriend to pine over? I know young love, especially unrequited, is tough to overcome but that, like much of the goings-on in the movie, doesn’t pass the smell test. 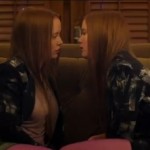 Screenwriter Bill Gullo, however, has more up his sleeve than just teen angst meets a kind of watered down “Invasion of the Body Snatchers” — by the time the credits roll audiences will be impressed at the twists he’s managed to sneak through. It’s one of the few commendable bits because everything about Plus One is nondescript and so slow building you’d swear you know every possible outcome before it happens.

And that, you see, is also as big a problem as there being no explanation for anything. There’s quite literally nothing happening for 85 of the 95 minute runtime (only the romp between Melanie and Teddy register a blip on the interest meter) and the folks we’re attached to have personalities of wet, single-ply napkins. Even if just one of the characters was mildly interesting Plus One wouldn’t have played out so harshly. But then again that’s what clones are for, am I right? Right the wrongs; be better than the original. It’s too bad they weren’t the focus of the story . . . 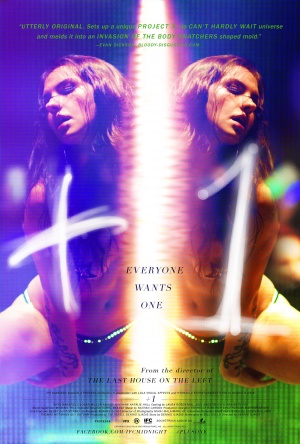